Wayne Eagling’s choreography and version of The Nutcracker has the most striking beauty and excellence throughout. The convivial atmosphere of the crowd scenes created by Eagling and enhanced by Peter Farmers’ skilful design are mesmerising throughout. Think of glorious fabric swirling through space, wonderful wigs, heavenly head pieces and illustrious sets, all collaborating in the thrilling spectacle and coupled with the skill of The English National Ballet.

Eagling brings a time honored story to new life with a myriad of unique moments, such as Clara and her prince traveling in a hot air balloon as part of her journey into and out of the dream. These unique junctures assist even the most mature audience member into feeling captured again by the timeless tale.

Act 1 was succinct and showcased The English National Ballet’s diverse cast with scenes unravelling from Clara’s bedroom. During this performance, Clara was played by the buoyant Cheryl Heung from Hong Kong as a child and the technically unblemished work of Japanese ballerina Shiori Kase as the adult Clara. 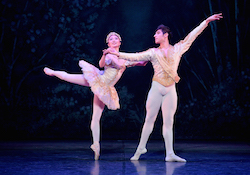 Shiori Kase as Clara and Cesar Corrales as Nephew in The English National Ballet’s ‘The Nutcracker’. Photo by Laurent Liotardo.

Scenes then seamlessly folded out into The Party, The Battle and The Land of Snow, straight into the interval, leaving the famous divertissements of Act II as delicacies to return to, and this is where the enchantment of The Nutcracker really amplifies.

James Forbat was a dynamic and robust performer only several times put out by his mask that appeared to blur his vision a few times. The other costume battle was in the Arabian divertissement (Souza, Ballantyne, Stott, Harrington and Kundi). Although an entrancing design, I soon became distracted by fabric as it fell over the head of one dancer but was skilfully removed as the dance continued.

The moments of comedy and characterful choreography performed by the Mouse King (James Streeter) was a merry take on the villain’s role, partnered perfectly with the costume’s eerie design (think of a goat’s head skeleton).

Overall, The Nutcracker is a night at the theatre that one should cherish, and this particular chronicle was worth every minute. A Christmas season treat.