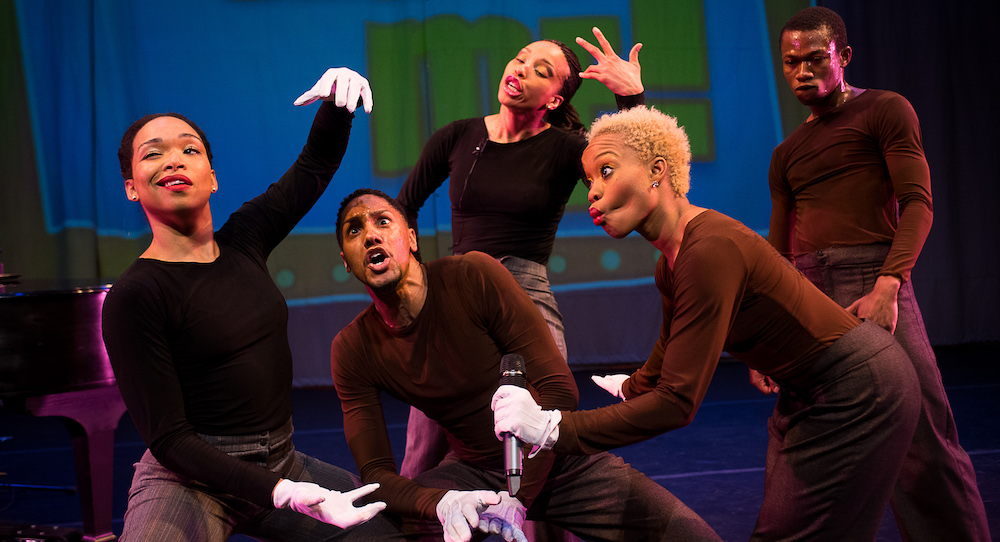 It can be truly striking to sit back and reflect upon how American “pop” culture developed. Interestingly, so much of it derived from the traditions of those displaced through the African diaspora. Heartbreakingly, those were the same people whom American culture repressed, oppressed and dehumanized. What is also astounding is just how much joy, gratitude and love lie within these cultural products — from dance to music to poetry to visual art — even in the face of such subjugation (and the struggles that resulted).

Through movement, music, theatrical vignettes and projection design, Camille A. Brown & Dancers’ Mr. TOL E. RancE offered this kind of light and joy, if at other times shining a light on the harder truths of this country’s racial history. It felt like part ode to 20th century “black” culture, and also part stirring statement on the sins of America’s past (and, truthfully, present) with respect to race.

Liveliness was present and clear from the show’s opening. Dancers moved together in a large group, building a feeling of community. They wore fedoras, old-fashioned sneakers and slacks with suspenders — creating a cool Urkle vibe (a non-nerdy version of the beloved Fresh Prince of Bel-Air character, shall we say). A live piano player (Scott Patterson, also the composer) accompanied them. Soon, they assembled in a half-circle, the dancer in the middle showing their “moves” to the group (creating a sort of “cypher”, common in the hip hop dance world).

One did the “worm”, another jumped a leg though the other while holding it (an impressive “b-boy”/”b-girl” trick), and another articulated through joints and gestured — a smooth, fluid form of the “animation” dance form. Much of this seemed like guided improvisation, an approach that — when done right — can offer clarifying structure while also allowing dancers to move in ways that are most natural to them (and thus, they are the strongest dancing).

Soon, speech joined movement and music to bring in even more joy and fun. Dancers counted “5,6,7,8!” and said things like “Eat it up!” and “Hallelujah!” I could hear claps and laughs from the audience. Smaller groups came in, executing (seemingly) set choreography that demonstrated Brown’s uniquely compelling and pleasing movement vocabulary. For instance, a trio executed lively footwork and then moved their torso back and forth — two dancers moving in the opposite direction of the one other. This movement was satisfying and memorable for both its energetic quality and its aesthetic.

Another key element of the work — its aesthetic, its approach, its meaning — soon came in; the poster for the iconic show Diff’rent Strokes filled the backdrop. Before this came the phrase “And together we’ll be fine”, which made me breathe more deeply and smile. It felt calming and reassuring. Soon came the Amos and Andy poster, and subsequently that of The Jeffersons. The poster for The Fresh Prince of Bel-Air filled the backdrop next, and the dancers rapped the classic Will Smith character’s rap.

Later in the work, two dancers kept asking each other, “Wa’chu talkin’ ’bout, Willis?” in different intonations, bringing us back to Diff’rent Strokes. The audience (including myself) chuckled at these references and their delivery. Into my own life experience (as squarely in the middle of the millennial generation, chronologically speaking), the poster for Black.ish filled the stage. Before long, the element of honoring 20th century “black” culture was clear enough to me. It felt like a fascinating retrospective, one I was pleased to experience.

While much of the movement — and overall atmosphere — was quite energetic, slower moments did offer a calmer, more contemplative feel. I wondered if more of those sort of sections earlier on in the piece would bring in greater emotional and atmospheric balance. Yet if Brown was going for more of that vivacious, upbeat atmosphere, perhaps that balance wasn’t the goal (legitimately, validly so).

One of those slower sections came after a section of particularly high-energy movement (knees rising to the chest, and spins to the floor with rising back up again). Lights faded to blue and piano music slowed, notes lengthening and lowering. A soloist moved with that same sense of contemplation, exploring the possibilities of movement nuance within individual limbs. She raised her arms to the side, and moved through them to other parts of her body, circling wrists and rippling through her elbows into shoulders and torso. This movement felt thoughtful and authentic.

This section came before a red curtain dropped down on the backdrop, reminiscing that of classic cartoons (what I can remember from my childhood as behind Bugs Bunny saying “Guup, guup guup, that’s all folks!”). Mr. Jefferson popped out his head, making the audience laugh. “Act II — Change the joke, slip the yoke” appeared across the backdrop in cursive writing. Looking more closely at the program, Brown included a quote that connected to this act title. It pointed to marginalization and dependance upon the more powerful.

With reading this, I was saddened and disheartened to think about African-American culture being appropriated and too often the “butt of the joke”, so to speak, while (for the most part) powerful white men in 20th century entertainment benefited with increasing money and power. Particularly as one who has reaped the benefits of white privilege (and will continue to do so), it is important for people like me to be led to think about these historical wrongdoings. Then we can be better allies in the fight to eliminate how they continue to manifest and harm the marginalized in the present and future.

Brown herself took the stage after this shift into a second act. The audience applauded at seeing her. An enticing syncopation moved right through her joints, a musicality that was sinewy yet precise. She exuded a calm confidence, seeming to have nothing to prove. Other dancers soon joined her, wearing white gloves and gesturing energetically. This choice referenced pop culture depictions of people of color in the media. The unease in the movement and overall atmosphere pointed to the pain behind, and which at times springs from, these representations.

A gameshow next took the stage (using a title that I, as a white person, do not feel that I can write, I’ll just say). Comically, sharply, meaningfully, it held a mirror to the problematic ways that people of color are represented in the media. Throughout it, the dancers and design (such as the bright backdrop and use of yellow papers as props) were lively and confident. Yet the words spoken were damning and dismaying.

A slower, more reflective section followed, a soloist moving with weightedness and agitation. Behind him was projection of a dancer looking like him, dressed similarly and moving similarly, yet timings and qualities differed. There was a space between what happened in front of us, in the flesh and what happened on the screen. That space seemed to cause conflict for the person existing and moving in real time. Brown and the gloved dancers soon returned, appearing behind the backdrop as it rose. Patterson played Louis Armstrong’s “What a Wonderful World” on the piano. Although the dancers moved with the same intensity, there was a new calm and contemplativeness reflective of the song.

One by one, the dancers fell to the ground, to leave Brown standing. The curtain fell. I was left with a sense of mystery and uncertainty about the future. The work ending with that hopeful song also left an impression on me; I was singing it to myself as I walked out of the theater. In the face of oppression and its lasting effects, there was joy and grace. That is a profound outcome, one that adeptly-crafted, adeptly-presented dance art can illustrate.