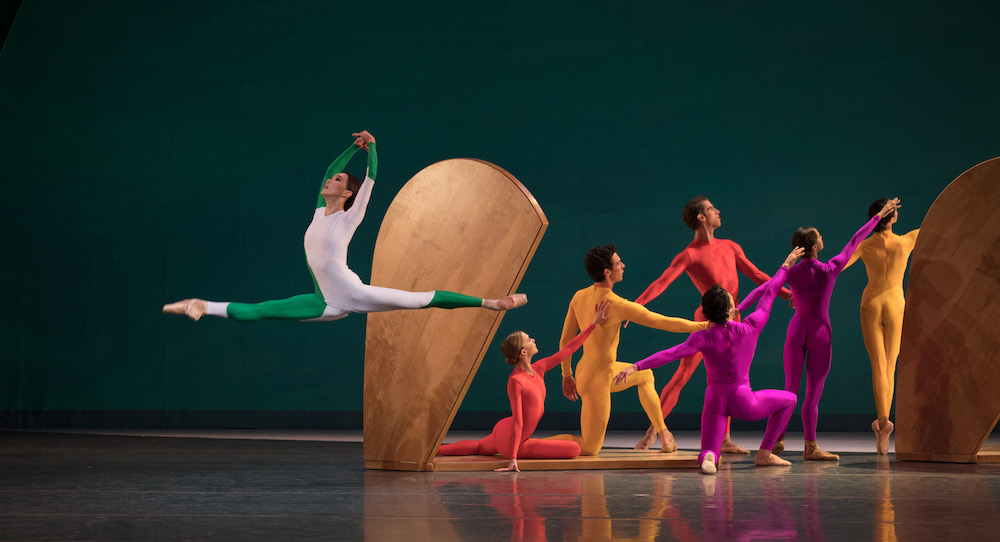 Moving, loving, eating, sleeping — there are actions that have always been fundamental to being human. We all do them in different ways, however, and have done so throughout the ages. Dance — visceral, narrative or non-narrative, endlessly aesthetically adaptable — can put a mirror to these experiences so that we can step back and truly see them. American Ballet Theatre (ABT) presented works from three different choreographers in this program, all exhibiting a different viewpoint on those fundamental aspects of being human, from different places on the human timeline, all in movement. The result was aesthetically and conceptually meaningful, both in being thought-provoking and enjoyable.

James B. Whiteside’s New American Romance was full of joy, playfulness and aesthetic harmony. Whiteside is an ABT principal beginning to build a choreographic portfolio and unique voice. The work first premiered at the 2019 Vail Dance Festival (Vail, CO). There was something quite modern about its sensibility, but also something quite classic. The balance between the two spoke to moving forward in the world, but also holding on to fundamental truths of the world and ourselves in it (individually and in relationships with each other).

The curtain rose, and a color palette of lavenders and blues immediately made me feel more peaceful and contemplative. The group grew as dancers ran onstage, until they hit a formation with dancers facing forward and gazing intently forward. They raised their arms to fifth en haut — simple, clear, resolute. The group dissolved, a pas de deux taking center stage. A lovely harmony of music and movement played out, such as a graceful extending of a front leg forward in a lift as the musical note unravelled just so.

Further sections would come and go, sometimes feeling like they did so a little quickly to me; sometimes lingering in a section in a bit longer can allow its energy to build and for audiences to get to know it and savor it a bit more. Yet this quick shifting also did help to build the theme and energy of illustrating the young, restless, and vivacious. Whiteside shaped lovely canon and contrast of levels to further that dynamic feel.

One memorable trio of ballerinas in particular offered these elements, with a half turn — leg extended 45 degrees up and forward — danced by the three on three separate counts, and later a pleasing pose held for a few counts with them at low, mid, and high levels. Gesture additionally brought a sense of unity; ballerinas held hands as they executed low pique arabesques, and together crossed wrists from holding arms in fifth en haut.

Also building at different points were different moods, from qualities of the music, movement and dancers’ theatricality. A ballerina’s solo offered a bit more spunk and sass than the work had previously offered. A trio with two danseurs and one ballerina was softer and a bit more contemplative. Three danseurs took the stage to exhibit their bravura and powerful confidence. All of these different moods and viewpoints created a window into the different ways that people can be within themselves and together, moving in space. To end, a larger group assembled in a circular shape, evoking the smooth functioning of a harmonious system even with all of these separate individual and collective ways of being — past, present, and into the future. It all felt hopeful and uplifting.

Jessica Lang’s work, Garden Blue, followed. In many ways — aesthetically, energetically, conceptually — it felt like a Salvador Dali painting brought to life in dance. Part of ABT’s Women’s Movement, a program to nurture emerging female choreographers, the work premiered on October 19, 2018. What first stuck out to me were oblong shapes resting on the stage as well as flying overhead (set design by Sarah Crowner). Something about these spoke to me of the melting clocks in Dali’s iconic work. The backdrop in green, blue, and white spoke to me of nature.

Dancers wore unitards of all different colors, helping to build multi-faceted color palette; a rainbow danced across the stage in larger group sections with dancers spread out across it. They locomoted through the space, walking at different speeds. They then began to move with more technical stylization — in classical movement vocabulary, yet with melty, “ooyey-gooey” shifts through the torso reminiscent of a more contemporary movement idiom.

Viewing this movement, I thought about the curvilinear strokes in contemporary paintings. Off-center shapes were brought an intriguing asymmetry. Arm and leg extensions hit musical accents in enticing ways. Arms hit halfway and all the way up along with musical notes. A dancer spin his seated partner, her toes raised, as a longer note played.

Whether all in unison or in smaller groups of unison, the dancers kept the stage picture moving in dynamic ways.

Part of this dynamic action was also how dancers moved those oblong set pieces from time to time, creating a new set design — and therein a new visual and energetic feel. Another part of the dynamic action here was how timing and quality would shift along with tonal and temporal shifts in the music.

Within these shifts, dancers began to take on personalities and become their own characters. Little theatrical moments began to play out. One of these dancers wore white as well as other colors, which signaled to me an integration of these other characters’ qualities. Though there were moments of tension leading up to it, the ending brought harmony and unity within the group — the integration of this character played out in time and space. The aesthetic and energetic and aesthetic parallels to Dali’s work tied the work to a post-World Wars modern era for me, yet aspects of it were undoubtedly timeless. That temporally specific, yet fluid quality seems to me to be a quality of great art; specificity makes it real, and fluidity makes it feel more universally applicable.

Gemma Bond’s A Time There Was brought us back to the Middle Ages, yet if we were to look at it through modern-tinted glasses. Costumes were in earth tones, in Medieval styling yet with contemporary touches. Lighting had an earth-tone tinge to match, like the light of late afternoon in autumn. Benjamin Britten’s score echoed the rhythms and tones that we associate with Medieval times, such as a harmony from a harpsichord — yet modernism poked through in certain atonal inflections and similar more contemporary elements.

Like in the prior two works, shifts in energetic and aesthetic qualities shaped atmosphere and mood — with clarity and intrigue. For instance, a dramatic full-vast opening dissolved into something softer as the feel for a sequence of smaller groupings. Characters began to develop through theatrical moments, also like in the prior work. Gesture helped create these moments, while more technically “big” and traditional movement — such as expansive lifts smoothly rolling into the floor or landing in a beautifully lifted arabesque — maintained dynamic energy and visual intrigue.

Yet I found this work resonating with me less than the prior two works. Perhaps the specificity in time actually detracted from my experience of it, strangely enough; perhaps my mind enjoyed filling in the blanks rather than given the full text. Interestingly, Bond’s ending seemed to offer time for such contemplation on one’s personal interpretation; the dancers exited, one by one, yet the stage remained lit, and the curtain fell.

With what might our minds be filling in the stage at that point, colored by our perspective on what had just happened there? How might those perspectives relate to what we imagine of the characters we just met, and how much to ourselves — and the commonalities between the two? Dance in space, in time — past, present, and future — can bring us to such reflecting, often upon the very things that make us human. ABT’s program on this evening made this truth undeniable.