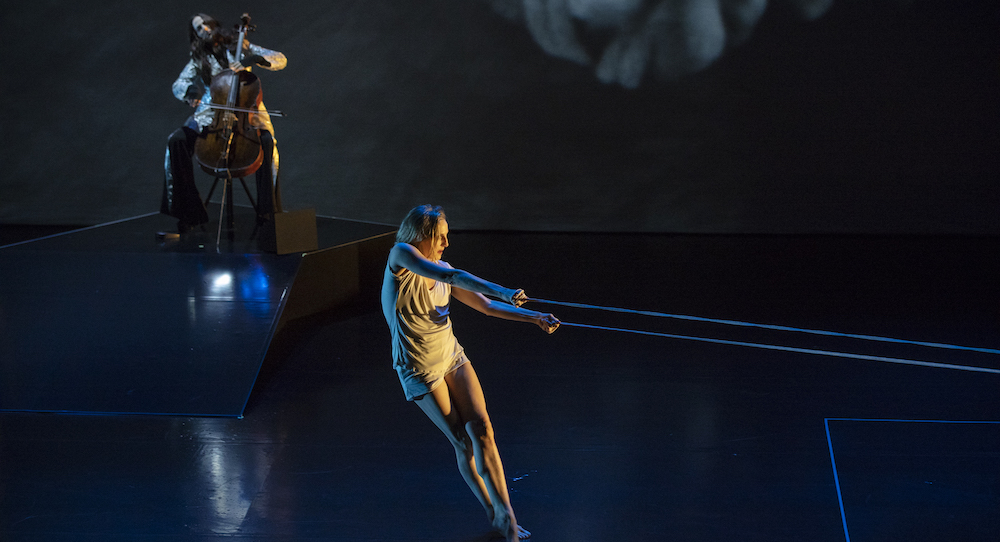 There’s just something about when masters gather — their combined experiences jelling and mixing such that they become more than the sum of their parts. There was something particularly striking, and in a way unexpected, about the gathering of masters that was The Day at The Joyce Theater — danced by Wendy Whelan, choreographed by Lucinda Childs, and accompanied on the cello by Maya Beiser. David Lang composed the work’s two main scores. A universality in the theme could offer a point of relation and connection for any attending audience member. Although with much stylistic nuance, a paring-down of aesthetic elements allowed this universal theme to take the lead and be the focus.

Masters gathered could easily let extreme virtuosity — which can come to feel alienating and erudite, if impressive — take center stage. What happened in this show was, commendably, the opposite; virtuosity was evident in an elegant simplicity, one with the potential to be truly pleasing and meaningful for all attending. A stark aesthetic was clear from the curtain rising — a cellist playing long, soulful notes and Whelan’s image appearing on a backdrop.

“I remember the day,” she said, continuing on with descriptions of common life occurrences and epiphanies: “I decided to make a change in my lifestyle”, “I decided to move there”, “I decided that the pain I was placing upon myself was entirely optional.” These statements were simply phrased and straightforward, but evocative through the powerful emotions that we experience as we experience these life happenings. Seemingly, the authenticity here lay partly in a method of seeking completions of the statement, “I remember the day when….” from members of the general public, over the internet — as Beiser (also the creative director) explained in program notes.

Although these statements derived from individual people’s experiences, the commonality of these experiences also seemed meaningful; what seemed to be on display here was the simultaneous power of language and its inability to truly capture the gravity of life events and epiphanies like these. Teasing at that contrast, strings came down to form a square (Scenic Design by Sara Brown). A clean, simple stage geometry also stood in direct opposition to the weight of what was being said.

Whelan entered, and began to move — with grace yet assertiveness, power yet a surrender within malleability. In a simple white tunic (Costume Design by Karen Young), she embodied that duality, that tension of inherent opposites co-existing. Dancing with a long stick, holding it in between her two hands, she seemed to find a freedom in the constraint that it placed upon her. She danced another movement phrase in a chair, opening her legs to a lunge while seated and looking up, arms and chest raising to follow her gaze. Here, there was an assertiveness in placing herself — versus seeming more transient at other points.

All along, Beiser’s deep cello tones continued, some still long but more staccato notes also coming in. Behind them both were projected images of a busy train station, people all together in space yet in their own experiences of the world. Whelan’s groundedness contrasted their locomotion.

The statements continued, coming to be in groupings of the statement’s start — “I found out,”, “I heard”, “I got”, “I lost”. There was forward agency and directness to these statements, in tension with the deep emotional significance of the events they described.

The statements began to take on even more and more emotional weight — “I was diagnosed”, “I sent in my letter of resignation”. Props also grew bigger; Whelan pulled at two big ropes, seemingly pulled from their other end offstage, bending deep and grounding in strong legs. Here, I thought about the weight and persistence of the forces that can pull at one in life. The way this concept became tangible through props and movement was striking and memorable.

The aesthetic and conceptual ante kept rising, the risks and daring increasing. Soon, however, would be a dimming down of this increasing energy. Lights came down, then shined through backlit window panes. I thought about this as a “night” to “the day” — reinforcing the cyclical nature of life, as well its yin/yang balance between innumerable opposites. Lights back up, I noticed that Whelan and Beiser had switched places — Beiser now on stage left and Whelan on the raised structure, a slope at its front. Something about that switch spoke to me of the universality of the experiences described in the show.

The section to follow lacked the narration that the first section had, and thus for me felt less moving and meaningful than the prior section; then, words and movement together came together to have quite a meaningful resonance. Yet Childs’ movement vocabulary was more nuanced, impactful and virtuosic here. Whelan angled her body, leapt, rolled down the wedge, bent deep to lift in a turn. The choreography was dynamic and enticing, and Whelan danced it with a sophistication and soulfulness that evinced her years of refining her artistry.

Later on, a large sheet dropped down, the shadows it cast ghostly and mysterious. Whelan wrapped herself in it, a choice with seemingly limitless territory for interpretation. This multiplicity within something specific echoes the way the work delved into common experience, yet individual people live out these experiences in unique ways. Projection of rippling sheets, lights again dimmed, offered a meditative effect that had me in a reflective space on such shared, yet individual experience.

As Whelan and Beiser bowed, and audience members clapped vociferously, I thought about how all of these different people clapping — all with their own life experiences — lived out these sort of stories in their own unique ways. Thus, all likely had different memories and thoughts in their own minds at that moment. Art can be a powerful force for connecting us, but it can also lead us to our own thoughts and questions. That’s part of its magic.