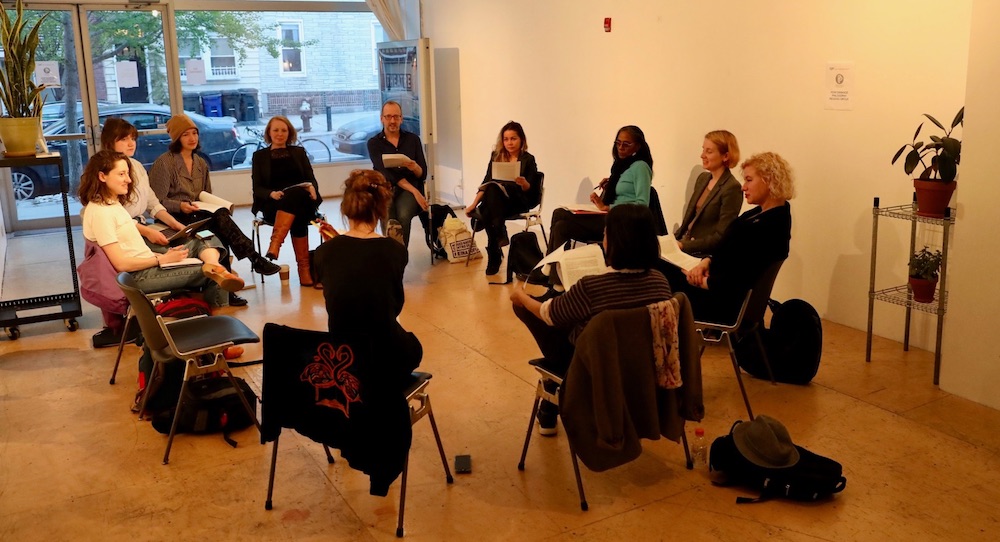 You might be thinking, performance and philosophy? How could these seemingly distant topics possibly have enough overlap to warrant a dedicated monthly reading group?

Dance Informa caught up with Charlotte Farrell, reading group monitor and director of the Center for Performance Research (CPR) based in Brooklyn, New York, to get the answer to this question and many more.

Can you speak a little about your background in dance and philosophy?

“Well I completed a PhD in Theater and Performance Studies at the University of New South Wales in Australia, and my relationship with dance developed out of my interest in theater. Working with Erin Manning at Senselab in Montreal, cemented my interests, which later flourished in both theater and interdisciplinary research. It’s really the community at CPR that got me into dance; I entered through philosophy of performance more broadly and later narrowed into the realm of philosophy of dance.”

What exactly is performance philosophy? 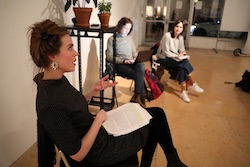 “Performance philosophy foregrounds the way that performance is already something that thinks. They aren’t separate things but intercept and interrelate with each other. Performance is a mode of knowledge production in and of itself. You don’t need to superimpose a philosophical prism. Because of this, our group has a wide appeal: philosophers, dancers, bankers, baristas.

The performance philosophy network has its origins in the University of Surrey through Laura Cull, who spearheaded the international network, which plugged into her initiative. One thing that’s really special about our reading group and others like it around the world is that despite its roots in the world of academia, it has the potential to distance itself enough from these roots to appeal to the general population and generate community interest.

How did you get acquainted with CPR, and can you speak more about that connection?

“I was familiar with CPR because it is a central lab environment for all things performance-based in the city. It was co-founded by two important choreographers, Jonah Bokaer and John Jasperse, in 2008, and I always felt at home there. When a position opened up, I applied, feeling like it was the right fit, and it was. I especially love the community-oriented atmosphere and the support the center provides for affordable conditions for artists to investigate.”

When did you start the performance philosophy reading groups, and what was the final push that led you to start them?

“Our first reading group was in March of 2018. I saw the space between academia and performance practice and thought it was important to provide the physical space for such ideas to occupy; people already had interesting things to say, and the reading groups were a way to bring those things together. Right around the same time, a call was put out to form reading groups, which dovetailed into the Performance Philosophy reading group that exists today.

At first I didn’t know if people would come, but they did! The group keeps growing and growing, which I find both surprising and unsurprising in turns. Not only do the groups fill the hole between academia and performance practice, but they make reading less of a lonely, solitary activity, and they feed people who are hungry for community. Collaboration is central to performance practice and should be for academia as well.”

What have been the most rewarding aspects of the reading groups?

“My own personal reward is how energizing and energized the sessions are. They usually take place at end of work day, and I am always recharged by the conversation and people’s willingness to think and be vulnerable.

It’s truly an example of experimental thinking in a group context. People are encouraged but not at all urged to participate. Nothing expected of you, which results in actual free thinking. There’s also no monetary element – the reading groups are free and open to anyone with an appetite for the kinds of conversations we will be having. For a moment we get to revel in community and freedom, away from the product-oriented world that surrounds us.”

Is there a certain paper that sparked a particularly interesting discussion you can recount?

“We often read from the Performance Philosophy Journal, which is free and available online, and groups are usually cohosted by a CPR Artist in Residence. The first paper that comes to mind is about proprioception and trust exercises and was cohosted by Kyle Marshall. There was a discussion that led to a conclusion that couldn’t be understood unless it was embodied. After grappling with language for some time, we decided to try a movement-based exercise, which ended up taking the group to heart of questions addressed in article. We were not only sitting around and talking about theory but also doing performance philosophy: movement that thinks!

Another memorable experience came from a paper about the use of masks in Dada performance. We realized about halfway through the meeting that it would’ve been very helpful to actually have masks and enact elements of the text. By far the most thought-provoking moments are when we realize that performance or movement are needed in order to reach a concept – a display of the aforementioned intersection in real life. It’s these ‘yes!’ moments that are the most exciting.” 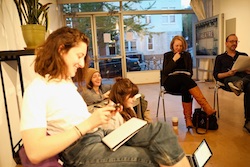 What are the biggest challenges you run into with the reading groups?

“The main challenge is to create conditions that make people feel like they can say whatever they think. Academic environments can be stifling, so we try our best to avoid that kind of atmosphere, while still engaging our brains at maximum capacity.

I always start by saying that people can’t bring in outside references; this helps avoid isolating people because everyone comes from different walks of life and has different educational backgrounds. We really foster accessibility, and if there is any hesitation from reading group attendees, it’s only ever for first couple minutes.”

Do you have any predictions about the future of performance philosophy?

“While I can’t personally speak to the future of performance philosophy, I can say that there is a Performance Philosophy Conference held every year in a different city around the world that keeps growing. There is also a successful book series, and we will continue with CPR Artist in Residence co-hosting.”

For more information on the Performance Philosophy Reading Group at the Center for Performance Research, head to www.cprnyc.org/performance-philosophy-reading-group.