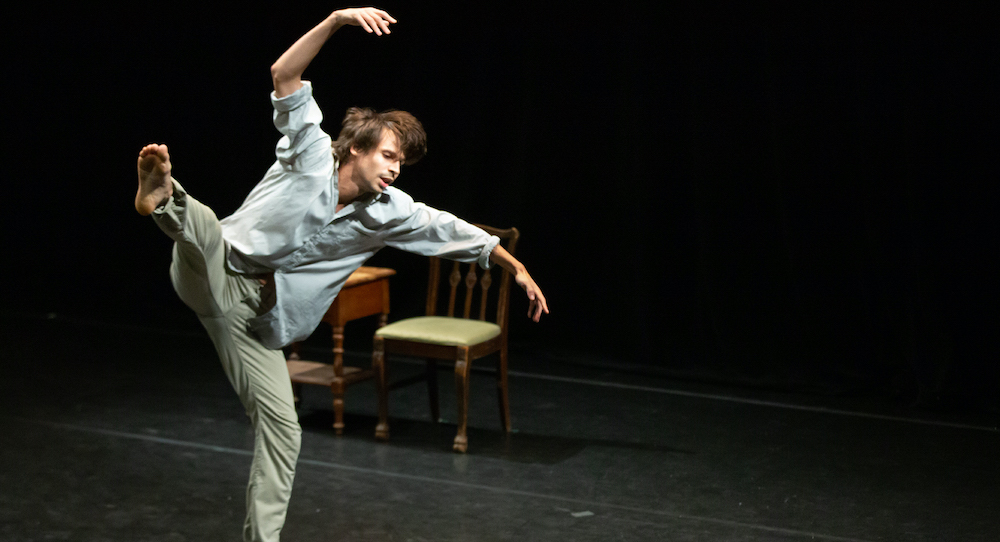 Center for Performance Research, Brooklyn, NY (and streaming).
October 14, 2021, and via YouTube.

Right from the opening credits of Doron Perk’s Grandfather Visit, I knew that it’d be something deeply personal and deeply human: “In memory of my grandfather, Professor Kalman Perk.” those credits noted. The work is a 40-minute solo in a sparse black-box theater, incorporating both virtuosic movement and more pedestrian, theatrical moments. Both stylistic approaches helped to shape a cohesive atmosphere: one that painted a picture of a person who was highly committed, highly thoughtful and highly persistent.

Perk’s facility and uniqueness as a mover, as well as careful crafting of that atmosphere through varied stylistic approaches, created something satisfying and intriguing – rather than tedious and drawn-out, as one might think a solo of this length could be. Grandfather Visit “is the result of a two-year process, brought to life thanks to a fellowship at LABA – Laboratory for Jewish Culture,” shared Perk through YouTube. Sagie Baron filmed the work, and music was from various artists both classical and contemporary.

To begin the work, lights came up on a simple set design (designed by Krissy Wright) – a chair and desk with a couple of quotidian items – and on Perk, wearing a simple white-colored shirt and khaki-colored trousers. A classical score imbued something traditional and sophisticated to this overall post-modern aesthetic.

Perk began to move, dancing with increasing size and energy. He offered a pleasing release and kinesthetic knowing. As a mover, Perk has long and mobile limbs – and knows to use them to create expansive, textured shapes and movements through space. The movement vocabulary contained some balletic shaping, but even more so had contemporary weightedness and originality of shape.

A good deal of circular shape and turning brought to mind for me harmony, balance, and continuity. On the other hand, the slightly frenetic quality of the allegro score, and – to meet that – the same quality in Perk’s movement, did add darker tonal layers. Deep in physical exploration, his movement slowed and then, from a more still place, he shifted into something pulsing, vibrating, much more uneasy. Bringing another shift, he moved back into movement and movement quality more geometric and easeful.

It was only Perk dancing, and it was a rather long solo at that. Yet, with with these varied movement qualities and choices, he avoided it all becoming stale. Bringing further kinesthetic and sensory dynamism, soon the score changed to bird songs and Perk’s movement became fully pedestrian: walking slowly through the space, gazing outwards, drinking from a mug that had been on the desk.

One bird began chirping louder and at a higher pitch than the rest within the sounds are. Perk then sat, right on the stage, finding rest. The lights lowered (lighting also by Wright), reinforcing a change to something more settled and less energetic. Yet, before long, the sound of a ticking clock filled the space: signifying the march of time and the constant influx of obligations. A spotlight dropped on him, and – remaining seated – he slowly gestured. Perk then moved in varied ways, slowly and thoughtfully, to finally come to his feet and roll up to a standing position.

This is the sort of moment that calls for audience members to take a breath and have some patience – which is challenging for us in this day and age, but can be immensely valuable if we can get there. Even so, surprisingly, the time in the work did seem to move quickly: signaling that this approach isn’t as tedious as some might expect it to be.

Now standing again, Perk began moving in and out of rhythm with the ticking clock. With him repeating a movement phrase a few times, sometimes varying it up in certain ways, I thought again about cycles, continuity, and balance. He walked around the stage space in between some of these repetitions. In those repetitions themselves, he offered new movement vocabulary in the variations on a central movement phrase – calling to mind action and rest, and breaks in between fervent creative or intellectual exploration.

The rhythmic ticking of the clock continued: a sure reminder of its steady and inevitable march, whatever timing such exploration and discovery may have (or try to have). Slower, gestural and pedestrian movement returned soon, as well as the song of that high-chirping bird. Perk drank again from the mug and walked around the space. Repetition, cycles, and persistence in one’s work (in between times of rest) would persist.

An instrumental score with percussive instruments and an accordion entered, and Perk embodied the more lively and layered score at hand in new movement vocabulary and qualities. The next time the bird, lowered lighting, and Perk drinking from the mug returned, I as an audience member understood these as signifiers of a shift into something calmer, less energized, and more pedestrian in movement (though still thoughtful).

These signifiers also seemed to speak to meaning and shape aesthetic structure – yet did so in ways that varied audience members could interpret as well as appreciate in their own ways. For me, my mind kept coming back to that cycle of rest and work, stillness and creation. Infusing into that cycle something a little more lighthearted and playful, Perk grabbed the mug again – though this time he danced with it, almost waltzing: an easy waltz with contemporary release and the liberty to make authentic, fully embodied movement choices.

Toward the end, a wholly new quality came into that cycle. Perk exited, and then re-entered with, this time, the desk and chair gone. Under brighter lighting, Perk now had a fully clear Marley stage over and through which to move. He now danced in even more unique, idiosyncratic ways: articulating joints and shaping limbs in fresh ways, finding little pixels of sound in the layered score to accompany each weight shift and joint movement.

Yet, the cycles of frenetic to a softer and less energized feel remained. Was this a representation of Perk himself, with influence from his grandfather – whereas before he had danced some sort of representation of his grandfather, to which he dedicated the work? That was for Perk to know and for audience members to conjecture, ponder, and maybe even enjoy the space of not knowing for sure about.

To end, he walked – pedestrian in quality – and rubbed his skin, perhaps in a gesture of exhaustion, exasperation, or simply exploring his own skin. He exited in this walk, and the lights dimmed. At first, I didn’t quite know what to make of or feel about this ending. Yet thinking of that section as an ending for the whole work, it was satisfying in the sense that it felt like it signified a shift to another stage or part of a journey, a passing-on in some way; the story of the rest and action, of creation and calm would continue.

To my mind, all of that was possible because Perk bravely dared to dance the very personal: a story of someone whose blood literally runs through him, and perhaps impacts how he moves through the world today. Dance art that gets that personal, particularly that which is created in a postmodern approach, can sometimes feel self-indulgent and tiresome. Yet, Perk offered something skillful enough to offer sensory interest throughout, and with meaning open and universal enough for audiences to see the stories of themselves and loved ones within it.

Grandfather Visit is an Exhibit A of how artists can present something that bloomed from deep inside themselves, but which can also connect with things deep inside their audience members. It doesn’t need to be complicated or eye-poppingly virtuosic: it just takes heart and honesty, and yes, perhaps a tablespoon or more of technical skill. The personal will rise above and resonate, because it’s a place at which artists and audience members can reach understanding – and we can truly see each other.