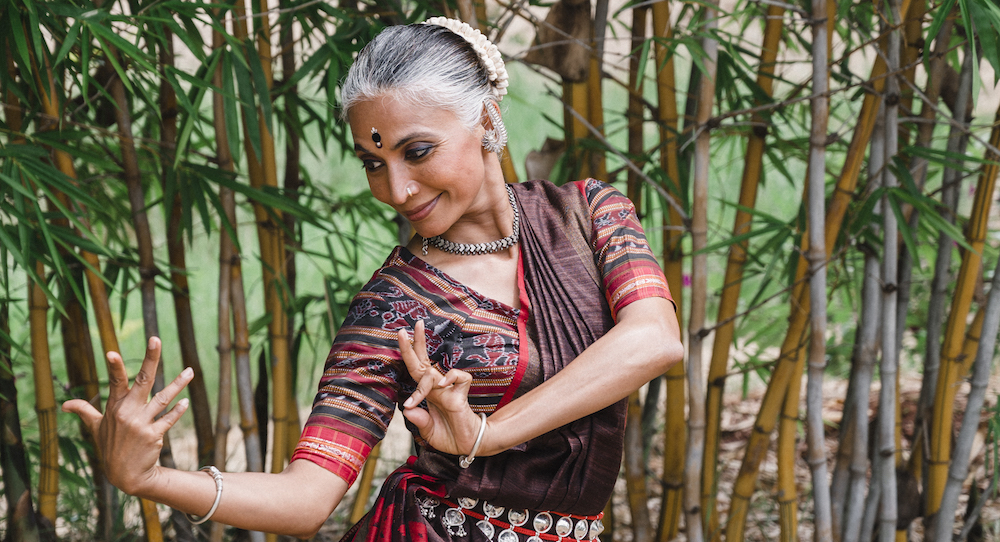 Baryshnikov Arts Center (BAC) presents the first installment of its 2021 digital spring season beginning on February 1, at 5pm ET. The series kicks off with Vibhanga, a non-narrative dance set to a reimagined score of traditional South Indian music, conceived and choreographed by classical Indian dancer Bijayini Satpathy. The piece draws from the curvilinear tendencies of the Odissi dance form, and is influenced by explorations of rhythm, displaying the layered complexities of the classical movement technique. Vibhanga marks Satpathy’s first choreographic endeavor following 25 years of touring with Nrityagram Dance Ensemble.

“Odissi is my mother-expression,” says Satpathy. “After four decades of dancing, I feel the yearning to move at my will with a sense of responsibility and respect that I feel as an heir and inheritor of Odissi. I feel ready to move with that sense of knowing: defying it, coaxing it, humoring it, honoring it and allowing it.”

Music and sound artist Justin Hicks’s Use Your Head For More, a work composed of found sound, spoken texts and vocal samples by Hicks’s relatives, premieres on February 15, at 5pm ET. Presented as a series of audiovisual portraits recorded and shot in the artist’s home, the sound and video work regenerates the transcription of a conversation between the composer and his mother from 2004, considering the phrase “Use your head for more than a hatrack” as a prompt for tactile sound explorations that render domestic objects into dreamlike audio environments.

Available to view free on demand at bacnyc.org until March 1, at 5pm ET, Use Your Head For More retells the memories of multiple generations as a single thread, highlighting the theme of ingenuity by engaging found sound and personal archive in a performance of reimagining, remembering and reminding.

“The saying ‘Use your head for more than a hatrack’ became a song my mom wrote as a reminder to her children that mining your imagination offers a way to create lushness with little at hand,” says Hicks. “She would also use it in moments to let us know that your brain is much more valuable than anything you could acquire. She used songs to remind us of things that kept us safe.”

Both Vibhanga and Use Your Head for More are part of the BAC Artist Commissions, which was established September 2020, in response to the COVID-19 pandemic, and supports the development of new work by providing resources for artists to realize their creative visions specifically for online presentation. Upcoming premieres include: Mariana Valencia’s brownout (March 1-15), Holland Andrews’ Museum of Calm (March 15-29), Stefanie Batten Band’s Kolonial (May 3-17), Tei Blow’s The Sprezzaturameron (May 17-31) and Kyle Marshall’s STELLAR (June 7-21). Each premiere is available for two weeks at bacnyc.org. A future schedule of live-streamed conversations with the artists to discuss their projects and creative processes will be announced.