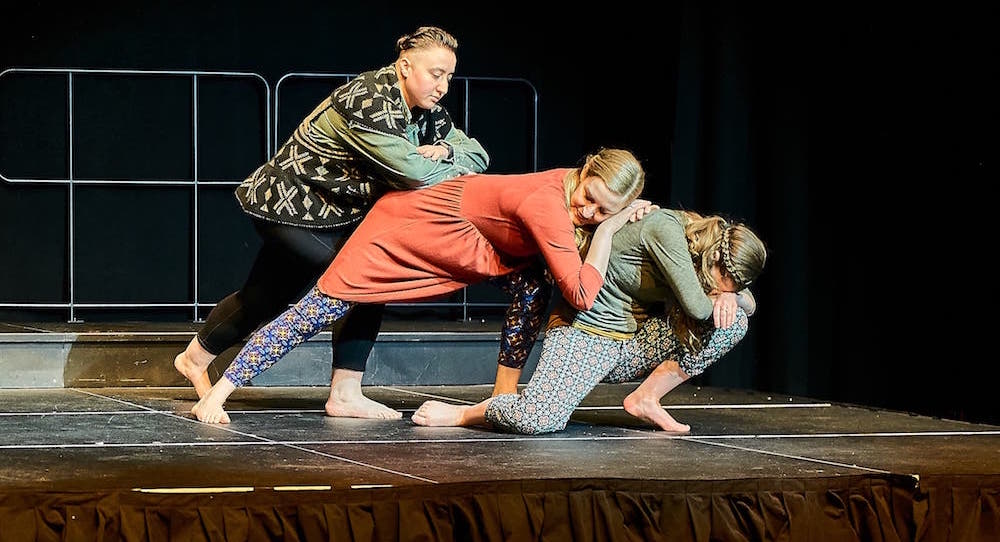 The cultural image of a dancer is one who is lithe, impossibly flexible and able to whip out technical tricks just about as easily as breathing. Yet, beautiful dance can also come from rising above limitations (or at least those things that have been framed as such). In its second show, Next Level, Abilities Dance showed the wonder that working through challenges can uniquely create. The company’s mission is to provide a space for creation and performance of dance to dancers of all physical and mental abilities. 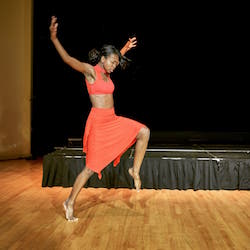 The show kicked off with Dance(again), a solo from Abilities Dance Artistic Director and Founder Ellice Patterson (choreographed by Jamie Ballou). She began lying on one side, and gradually came to stand. There was a sense of sway punctuated with moving up and down. These qualities matched the piano score, continuous and cyclical yet with striking high note and low note accents.

Soon a sense of waving developed from arms reaching up and circling back down. Battements had a similar circling quality, arching up and over at the highest point like a cresting wave. All of this was within a captivating musicality. The music and movement breathed together as one entity.

Yet, in further development of the piece, moments of stillness – and thus contrast of the music – might add the intrigue of contrast. Perhaps that might detract from her intended meaning. In any case, it seemed as if Patterson worked with her medical challenges in a skilled and committed way, grace and rhythm taking place of virtuosity as the element to keep her audience captivated and speak her truth.

The third piece of the night, Lasting Impressions (choreographed by Lauren Salva), had a similar feel to the music – repeated chords with occasional variations, to create a meditative feel. Dancers walked in simple patterns, clear paths often perpendicular or parallel to each other’s. The effect was simple steps being captivating, as well as strangely familiar; it felt like the energy amongst strangers walking on a street, energetically connected without perhaps ever actually speaking to one another.

One of them began to speak, describing a childhood memory. Others followed with more speech about their own childhood memories. Action escalated, and a more technical phrase was repeated a few times. In a simple chaine turn, one arm folded in while the other circled overhead. Done together yet in separate lines, the effect was visually captivating.

Other intriguing movement included dancers in pairs facing each other, one seeming to mirror the other’s arm pattern, to then turn so that they were back-to-back. They whispered. Speech in movement after that, again describing memories from long ago, brought a sense of shared nostalgia. At other points, they lay on their backs and then pitched the legs backwards. They performed this in unison, yet separated in space across the stage (in lines).

It all brought a sense of commonality, yet separation – so close, yet not quite in unity.

The dancers returned to a crisp, organized formation of simple steps, and the lights faded down. A sense of this state continuing was clear. Along with that sense of somehow mutual connection and disconnection, it felt as if this idea was all the more powerful because the movement was elemental and human – rather than “flashy”  and virtuosic. 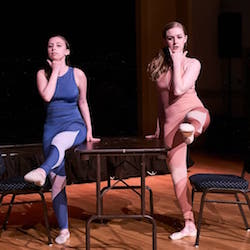 Later in the performance, after intermission, was the four-dancer Colloquy. A sci-fi feel came from costumes in a metallic feel (with a slight sheen, and striped in thick sections) and a new-age instrumental rock score. Staccato, geometric movement also brought a feel of automation and robotics. As technology progresses and questions around these matters echo in the zeitgeist, such a focus can underlie meaningful art. Yet this work was more about an aesthetic, a sensory world to pull audience members in.

Movement and staging was the base for that pulling in. Two pairs were on opposite sides of the stage – one at a diagonally-placed table, and the other facing out to the audience while standing. The pair at the table moved over, under, and around it, sometimes with one dancer sitting at an accompanying chair – sometimes together, sometimes with one freezing in stillness. The other pair remained standing forward, also moving sometimes in unison and sometimes individually (with the other freezing).

The two groups merged at the end, the movement remaining linear, angular and staccato. Extensions and turns added technical accents here and there. Lack of overly-complex movement seemed to allow this movement to be clear and compelling, rather than muddy or overstimulating. Ultimately the dancers froze, in a line, and the lights came down. Images from the work still ran through my head.

23:27 closed the night, bringing Patterson back to dance with Paige Fraser. The two also choreographed the piece, along with assistant choreographer Michelle Reid. They sat back to back, going side to side and back to front. They came to rise and separate. Patterson danced a solo with the stylized ease she’d demonstrated in the show before. Fraser danced one after that, full of wonderful dualities – grounding and lift, ease and strength, accent and continuity.

Moving front to back on the stage, on different stage levels and in the space before audience seating, was visually and energetically intriguing. Both dancers wore beautifully patterned head wraps, strong and graceful women of color standing proudly in their cultural truth. 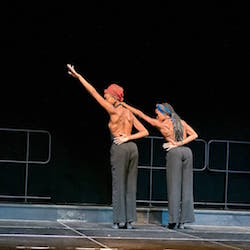 Abilities Dance in ’23:27′. Photo by Bill Parsons of Maximal Images.

Eventually, Patterson came from the wings with folding chairs and dropped them, making a startling thud. It certainly grabbed my attention! After further movement phrases, Patterson picked up and moved the chairs again.

While the thematic intent of this action could have been clearer, it was a striking and unique creative choice. This time they unfolded the chairs and sat, back to back again. The piece came full circle back to the beginning here. Technical movement did make itself seen in between, but the core essence of the piece was this simple relationship in space between these, conveyed by movement that was similarly clear and fundamental.

Without deeper thought and practice, limits on physical abilities might seem catastrophic for dancers. Yet Abilities Dance showed in this performance that the opposite can be true – limitations (at least those we call limitations in this culture) can open up new possibilities. Yet that’s largely only possible through the courage to step forward in the face of those limitations, to nevertheless create and succeed. If these dancers can step up in this way, so can we all, and rise to our own “next level”.