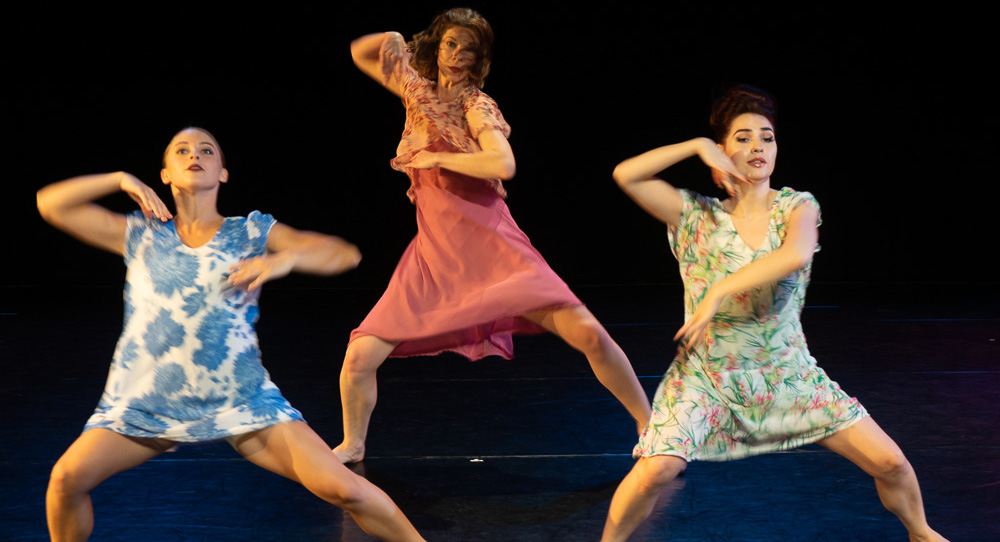 “I am a classicist,” wrote Benita Bike in her program letter. I did indeed see classicism in her work, but also evident were many modern/postmodern elements — release into gravity within movement, inventive aesthetic choices, and unique structural approaches. Sometimes postmodern work can be conceptually and intellectually meaningful, yet the audience experience of taking it in isn’t as pleasurable. Classical work can be aesthetically very pleasurable, but lack conceptual substance. In this show, Ms. Bike’s work (all pieces to her choreographic credit) had both strengths.

The first piece, “Schoenfield Dances”, set the tone for this overall quality. Its quality seemed to reminisce Isadora Duncan’s work, with a clear structure and formalism yet one that was full of ease. Adding to this reminiscence, the dancers wore flowy dresses in soft colors. There was also a clear jazziness, however; dancers “sugar-footed”, stepped with weight grounding into the floor on down beats in the music, and swayed their hips. Contemporary dance inflections, such as flexed feet in a leap with both knees bent, made themselves fully known as well. It all smoothly blended, yet stayed definitive — like the ingredients in a warm, comforting stew. 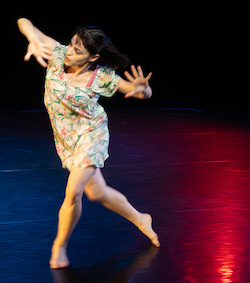 Structural elements were also clear and memorable, yet still flowed into one another. Group sections moved into solos, into duets, and back into those other structures. Like the dancers’ elegant dresses and their soft, yet sure movement, one eased into the other. Some moments, however, were particularly memorable in veering from this sort of typical structure — such as all dancers falling and resting in a fetal position (a Sleeping Beauty reference, if you will, to my mind), while one dancer — still standing strong — moved amongst them. This wasn’t the only such section in the work, but I wondered what even more of them might bring to the work. When they were present, they pulled me right in, dazzling my eyes, mind, and soul.

Two pieces later came “On Beat”, a fun piece with an aesthetic focus rather than one on any deeper meaning. It illustrated how, particularly in a world of widespread stress and sadness, such a focus can be just as worthy as one that delivers a “message”. The piece, like the work opening the show, blended formalism with experimentation to great effect. In movement, arms and legs reached far and wide to explore space. In a salient phrase, one arm swept up while the other swept to the side — like paintbrushes painting the air with arcs.

Other inventive touches, such as a lowering of the torso in two pulses with flexed hands, also grabbed my attention. At another point one dancer rolled through the space in between another dancer’s feet. Leaps smoothly led into turns. Somehow, one could break down this inventiveness into rather simple elements. That might have been part of the final product’s success. Much of this movement additionally had a lovely release and continuity through the body, yet there was also a formalism that kept it clear; lines were long and straight, facings were crisp in whichever direction, and formations were geometric (until they moved to new shapes).

Even with this formalism, it all somehow had a relaxed, groovy feel. One element on which I was unclear was the  ending — one dancer turned and did an extension (battement à la seconde), and the lights came down on her. Perhaps this choice was meant to convey a continuity, that this formalized energy and groove would continue. Yet something in me wanted more of a softening of this energy, into a resolution, for the end.

The final work of the night, “Plugged”, was a great choice for an ending work; it had both clear, poignant meaning as well as true aesthetic merit. The opening referenced the ocean — with movements like swaying seaweed, lighting reminiscing the way light refracts through bodies of waters, and a score of ocean-sounding “gloop gloop”-like sound effects. Gestures of slowly flapping wings and seagulls’ songs had the next section illustrating seabirds. Lights became a bit brighter with fewer speckled shadows.

After that, movement and music became faster and more frenetic. While the score filled the theater with mechanized sounds, such as gears turning and metal being beaten out, movement also seemed mechanized — sharp, angular, rhythmic, and mostly staying within a small amount of space. This developed into what felt like a portrayal of the present technological age in movement. Phones rang and cell phone notifications went off, while movement seemed hurried, panic, and somehow captured by an outside force. Dancers moved in patterns and sharply turned corners, suddenly becoming routinized.

The hurry, frenzy, and apparent anxiety of this section deeply contrasted the ease and harmony of the work’s beginning. Also keeping in mind the work’s title, what was clear was a sense that modern technology — and how many of us become drawn to use it — has made our lives more chaotic and stressful, rather than easier and more connected. Skeptics might call this view “Luddite”, yet it just seemed truthful and accurate.

Interestingly, this was another kind of mix of classical and modern, portraying the past and the present — although Bike’s style of the contemporized classical (classical technique loosened, released into gravity’s pull, and with inventive touches). The work was clear and meaningful enough to make me think about my relationship with technology, and the role of technology in the lives of those I love. With a classical grounding, yet a modern daring, Benita Bike’s Dance Art was an insightful blending of many elements — leaving my eyes, my mind and my heart quite content.