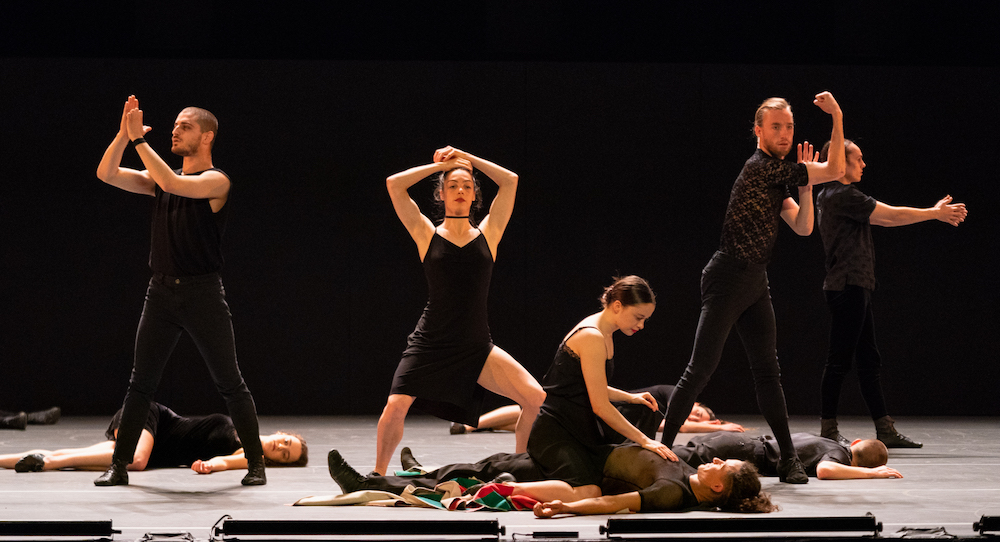 I had these matters in mind after watching Batsheva Dance Company’s Venezuela, choreographed by House Choreographer (and former Founding Artistic Director) Ohad Naharin. Striking, memorable movement was front and center — yet a very unique structural choice was even more prescient in how I received the work. The work opened gradually, energy building. Dancers stood in two lines, Gregorian chant resonating through the theater. They began to gently sway side to side, then let the sway dissipate back to stillness. The aesthetic was just as spare as this easy movement — black costumes, a black backdrop, and lighting in shades of yellow.

In a flash, they moved out from the circle into new formations, then into pairs. Ballroom movement filled the stage, but at a speed and physical intensity uncommon to the form. Seeing this fast shift of tone, I could tell that the work would offer the unexpected and challenge conventional tastes. A following formation brought something else unique and stylistically separate from what we had seen; in a clump, dancers initiated from elbows, knees, feet, and shoulders — like a spiny, prickly rose bush come to life.

Further sections alternated, blended, and opposed unison sections with those in which dancers moved with their own phrasework — building the idea of the individual versus the collective. The dancers oozed themselves into and out of the movement, truly living in it before living in what came next. The group again clumped and certain members began to lip-sync rap with a song from Notorious B.I.G. The content of the song was raw, controversial, and at certain points stomach-turning. The contrast between that and the choral hymns was stark, and a meaning developed for me — light versus dark, and temptation that can pull us from the former to the latter. 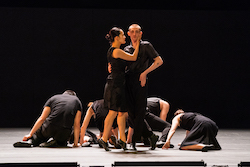 Batsheva Dance Company was presented by the Celebrity Series of Boston at the Boch Center Shubert Theatre. Photo by Robert Torres.

The lights went down and then rose again on a new section. It took me a second to realize what I was seeing — dancers were riding on the backs of other dancers, as if they were horses or camels. Something about the way it all came together was strikingly beautiful, though I was concerned for the physical  safety of the dancers being “ridden”. Unexpected moments brought me out of the meditative space of watching the slow walk of the pairs, one on the back of the other within them — including dancers planting feet down for the other dancer to crawl out from underneath, knees still slightly bent, to then quickly flip around in unison to again rest on the back of their partner.

A following section had them all against the back, with more dancers coming in from the wings, shimmying as they carried a towel over their side (towards the audience). They dropped the towels in a pile — on top of a dancer lying on his side — and joined the dancers in the back. He rose, covered in towels, and another jumped on him. Dancers came forward and danced with their own movement, seemingly improvisational yet crafted with facility. This mix of the spontaneous and formed pulled me right in.

Unison movement followed that, with many more rhythmic accents than had been elsewhere in the work. Another section of fast, frenetic ballroom movement snapped into place. Following that was a section of much slower movement, with arms moving from the elbows to move like birds flapping wings. The work was covering terrain of possibilities with incredible speed and daring, and I was entranced. The prickly rose bush image returned,  bony body parts initiating movement — adding something more familiar into the mix. It all drew to conclusion of what we would know as a first of two sections, with some dancers spinning into the floor and all moving slowly. Lights drew down.

The lights came back on two lines of dancers, gradually beginning to gently sway. The sway dissolved into stillness, and then with a burst they moved out into space. They then paired off into fast ballroom dancing. We had seen this all before. I wondered if we’d see new movement interspersed with what was familiar. After ten or so minutes of the same movement in the same sequence, it seemed clear that we wouldn’t — that, most likely, this second section of the show would be a near duplicate of the second.

Yet what was different was the music; more modern music replaced the choral music of the first section. It was intriguing to see how different music affected my reception of the work. For instance, a strikingly beautiful Middle Eastern-style score played along with the section of dancers riding on other’s backs, and my mind could fill in certain aesthetic blanks to (more easily) imagine it as riding camels. Sections with fast, frenetic movement had different flavors of electronica rock music as scores. It seemed more harmoniously fitting with this movement, if the choral music from before was compelling with this movement by contrast. The rap felt a bit more unsettling to me personally, with a lack of thematic opposition to something religious and traditional.

This playing at the effect of repeating movement and other visual content, while changing movement, seemed to be at least part of what Naharin was going for with this  structural choice. It was like an artistic science experiment — keep everything the except for one variable, and observe the results. I had to wonder how compelling those resulting differences were to an average viewer, at least enough to watch the same movement and sequencing of movement all over again.

For me, the movement was beautiful and intriguing enough that — at least at first — I didn’t mind seeing it over again. I enjoyed seeing nuances within it that I hadn’t perceived the first time. It reminded me of how most well-constructed movement material has layers of richness that can be peeled back and experienced. Yet this interest, along with my curiosity for how different music met the same movement, died off towards the second half of this second section. I had to wonder if it was sooner for other audience members, if they ever had this interest (and awareness to generate it) in the first place.

I do think average audience members, those who may not be very acquainted with dance art, are more perceptive and intuitive about the art form than dance enthusiasts most often give them credit for. Yet the work needs to be able to engage them in order for them to get there. Maybe some of those types of viewers taking in Venezuela did get there — it’s hard to know without surveying them.

Such formal considerations aside, we can reflect on how important it may be to regard the psychology and disposition of average audience members when creating works of dance art. It seems to be something to engage with a sometimes opposing consideration, the intellectual interest and creative passion of oneself as a choreographer. As dancers, choreographers, and dance enthusiasts, let’s encourage that engagement. The greater well-being of the artistic ecosystem is too important not to.