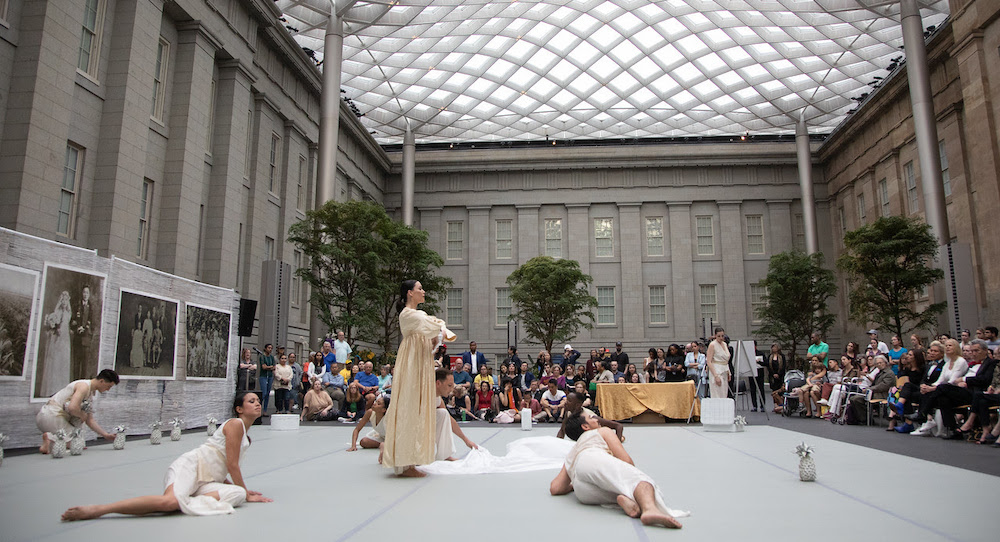 Telling an emotional, difficult story can demand a lot — emotional energy, clarity to help the listener understand, and courage in standing behind one’s truth. Dance an emotional story, and that can be all the more the case; one can feel it all through sinew to bone. When one can deliver despite these challenges, the magic can be unparalleled. In an outdoor courtyard at the Smithsonian National Portrait Gallery, Dana Tai Soon Burgess Dance Company illustrated in movement the story of Artistic Director Dana Tai Soon Burgess‘ grandparents and mother coming to the United States and working as indentured servants on Hawaiian plantations.

The work, Tracings, cogently and clearly evoked loss, love, discovery, yearning for belonging, and more — all to which the dancers fully committed. Also clear and clever was the way Burgess’s opening talk invited various types of audience members into the work. He explained how abstract movement — like that in the work — is open to various types of interpretations and reactions of feeling, for instance. He clarified how certain elements in the work, such as the white and cream-colored costumes (designed by Judy Hansen, and the color of mourning in Korean tradition), connected with Korean heritage and reinforced meaning.

To begin the work, dancer Kelly Moss Southall walked on with Burgess’ mother (which he also explained in the pre-show talk). This was a touching moment linking past and present, memory and familial love — themes key to the work. Dancers followed, one — Christin Arthur — with a suitcase. She also wore an intricately painted white and black mask. Burgess had explained how the mask, as well as the contents of the suitcase — a large white sheet — had deeper symbolic, ceremonial meanings. Ms. Burgess sat for a bit, gaze unshakably fixed offstage, then walked off (again supported by Moss Southall).

Arthur, still with the mask, slowly reached forwards and up. The other dancers, facing the back, began to move in simple ways somehow also colored with nuance — moving their heads in “figure-eight” shapes and rippling their arms from one hand’s fingers to the other’s. This simple, yet layered quality continued throughout much of the work. The score (from Aaron Leitko and Jason Kao Hwang with sound mixing from Felipe Oyarzun) reinforced this through a compelling harmony, though one with an eerie undertone.

Blown-up photographs of Burgess’ grandparents and mother also made up the wall behind the dancers. It all came together as Burgess had described the images in the work, “sort of ghostly.” All considered, this way of understanding the work felt very clarifying. Soon focus returned to the suitcase at center stage, Arthur creeping towards it. Movement became more fragmented through the body, body parts isolated. Feet beat on the floor, heads dipped sideways, and knees dipped and rose.

Tension was building around the suitcase and what it represented — the weight of what is brought and what is left. Reverently, but mysteriously, that previously-masked dancer took out a large white sheet from the suitcase and lay it flat. It now took up space, and had a new presence. The dancers turned and gestured with their arms around this new square. Building here was a striking shifting back and forth in between fragmentation and continuity in the movement.

Arthur’s character was truly becoming one distinct from the other dancers, yet soon enough she also exited the stage and returned with a costume just like the others’. This choice signaled some sort of assimilation into the larger group — though in movement, in many ways, she remained distinct. For instance, she frantically stuffed the suitcase with the sheet (props by Moss Southall, apart from dancing), closed it back up, and weaved in and out of the other dancers (spread out in lines, facing the back). There was a guardedness and grasping to her quality of movement and carriage, as if she was trying to protect what the suitcase held and signified for her.

A bit later, all dancers got suitcases and lunged towards offstage (stage left), moving that way in lunges on their own time. Arthur and one other dancer stayed stage left and gestured to and away from the dancers moving stage right, evoking the separation that can come with saying goodbye. After this came more posed, staccato movements, creating an effect of silhouettes morphing into other silhouettes. Refocusing on the suitcases, dancers began packing their own suitcases — with the grey-colored pineapple props in clumps at the outer edges of the stage. This action seemed to convey the idea of picking up what you encounter, even if something foreign in a foreign new place.

Arthur began to move faster, passing in front of the other dancers moving in unison. They followed her movement one by one, a structure that felt pleasing. Their movement picked up additional speed and athleticism to match the drama building in the score. With a leap and a leg lengthening backwards, the dancers together let out an audible exhale. I wondered if more of this in the work would have contributed to its drama and its speaking to the idea of community.

Something that came soon was there to convey community; dancers moved with their suitcases and then passed them off to others, evoking a sense of sharing. The tone shifted soon to a focus on a different kind of connection, romance. Two female dancers worked on the hair of another, from which they all moved into movement with a sense of sultriness; hips undulated while arms swung overhead in the direction opposite to hips. They repeated this facing the back, bringing a sense of coyness.

Movement became faster and developed a greater sense of spiral. A sense of yearning was in the air. A man at the edge of the stage held a pineapple — a symbol for what was longed? Ultimately the women fell to the floor, moving there with a sense of groundedness. One reached for but didn’t take the pineapple. Had she become content without having that for which she longed, or found it in a different way? It was all powerful food for thought. They rose and turned to face the man with the pineapple, all in unison, bringing a sense of mutuality and support.

They moved again, turning and spiraling quickly and with ferocity. They created some body percussion, and it was another thing making me wonder what kind of effect it could have if in the work more times. It was compellingly rhythmic and multifaceted, the way dancers stayed in rhythm together but each made the sounds and style of the percussion their own. Soon the tone changed from this higher drama to something a bit softer, with the score changing to have an air of hope and curiosity. More dancers came onstage and each held one of those pineapples, while walking slowly and intentionally. This moment felt powerfully meditative.

They danced another section of faster and more virtuosic movement, as if returning to action from rest. Then, in a sense of concluding the work, Anna Burgess returned to the stage. Arthur put the mask back on and faced Ms. Burgess. It was as if the older woman was seeing a memory of her younger self — “ghostly” indeed, in a reflective and hauntingly beautiful sense.

In a last, very meaningful moment, the younger woman handed Ms. Burgess the mask, as if putting her in control of defining the memory of herself. They walked off together, steady and sure. Reckoning with difficult memories of the past in such ways is no easy feat. Dana Tai Soon Burgess Dance Company’s Tracings illustrated that dance art can open up windows of understanding to begin that reckoning, however — a powerful gift to honor and support.