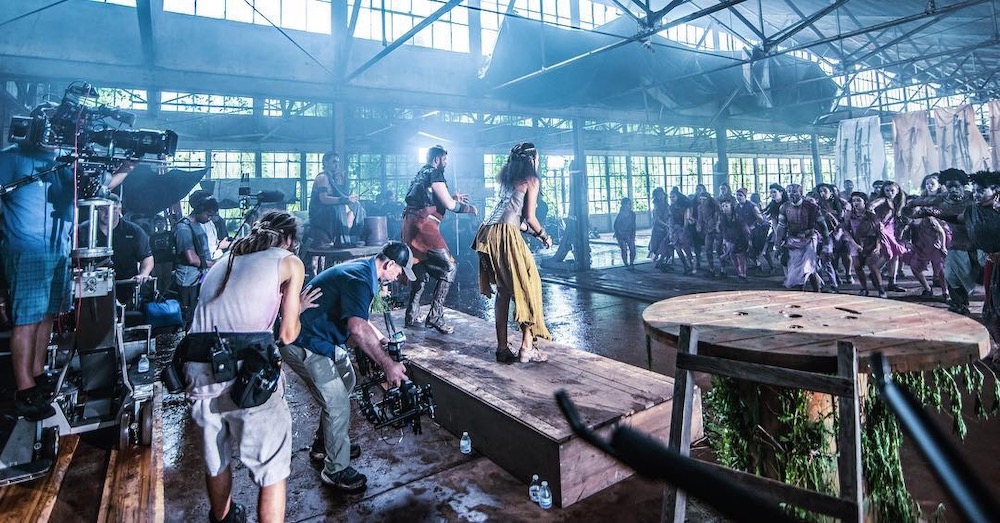 A new short dance film is preparing to drop later this year, and it’s unlike anything you have ever seen. Sound Language, which will feature leading tap dancers like Nicholas Van Young of Dorrance Dance and Maud Arnold of Syncopated Ladies, takes place in a dystopian world in the distant future. There, spoken word has long been forgotten and the warring tribes that now inhabit the wasteland can only communicate through various forms of rhythm.

Helena Hines, chief of operations of Só Dança USA, which helped produce the film, shares, “Sound Language is a pure celebration of both dance and filmmaking. The short film showcases an amalgamation of rhythms featuring tap dance, step dance and percussion.”

The film’s powerful introduction explains how the world came to be: “In the beginning, words lead to hate, hate to war and war to destruction. Words were outlawed and soon forgotten. Giving birth to the language of sound. Centuries later, the land is scarce, consumed by an endless storm.”

It is out of this that three distant tribes gather in the hopes that an outcast named Dig (played by Van Young) can heal the world through “the power of unity”.

“The film takes a creative spin on the classic ‘Rain Dance’ and flips it into a unique ‘Sun Dance’. Above all, Sound Language speaks, or shall we say ‘dances’, to the power of unity,” Hines explains.

Skyra Entertainment Executive Artistic Director Scott Poiley, who directed Sound Language, shares with Dance Informa the project’s origins, the filming process and the unique challenges it encountered. For him, the film was deeply important because it merged his love of tap dance with his love for film. He wrote the storyline as part of a greater mission to make a tap film of “significance.” 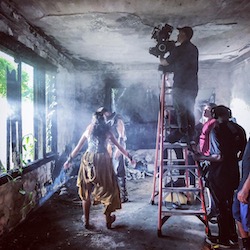 “Tap has always had a special place in my life,” Poiley says. “I grew up dancing with Savion Glover, Jimmy Slyde and a lot of the greats. I won Presidential Scholar, danced for the President, and I thought I was going to be a professional tap dancer and do the whole musical theater thing.”

While Poiley’s personal journey toward a dance career shifted due to a dangerous heart condition, he eventually received a life-saving heart transplant that allowed him the ability to dance and choreograph again.

“After my heart transplant, the doctors told me something I’d never expected them to say,” he recalls. “They said, ‘Well, you can dance again.’ It was wild to hear that. So while I was recovering, my wife Mary and I decided to start something new and open Skyra Studios. We also decided to merge my love of tap with filmmaking, which now leads us to Sound Language.”

Shot at an abandoned orange factory plant in De Leon Springs, FL, filming was met with some challenges early on. Besides weather issues that directly affected the plot, there were also issues with attaining full cinematic coverage.

“Typically, when filming, you do big coverage and then coverage of your subjects’ faces; you don’t think of looking at their feet,” Poiley says. “Well, in this world, it was a lot different because I also needed to get full coverage of the feet from the front, the back, et cetera. I needed to get my master, my close-up and shots from the side. So I had to get tons of coverage of feet. It was just a monster of coverage.”

The film’s choreography is accredited mostly to Poiley himself, but there are many instances when the dancers contributed segments and a few moments when they improvised.

Poiley especially enjoyed one preparatory moment with Van Young. “When I was rehearsing with Nicholas Van Young, it was really neat because we basically created a sound alphabet. We were going through each tap step and creating letters. I feel like if we had time, it could literally become a whole language! We were geeking out.”

The film’s three tribes — the Tap Tribe, the Step Tribe and the Drum Tribe — all speak in their individual languages. To better assist viewers in following their “conversations”, the film has subtitles.

“The subtitles are really neat for those people who don’t tap out there,” Poiley explains. “They can see how when they’re dancing they are actually talking and these movements and sounds are their words.”

On set, Poiley took two things very seriously: safety and quality sound recording. The facility had barren concrete floors and as a tap dancer, Poiley knew that would be unsafe for performers to dance on for 12 hours straight. So his team spent time creating a wood floor that would protect dancers and that could blend in with the dystopian environment. They also went to great levels to make the audio top-notch, even re-recording dances for crisper sound.

Now that the film is in post-production, it has been submitted to various film festivals. Even though it’s still early on, the team has already received news that it is an Official Selection for various events and has won awards at one festival.

“I’m definitely excited for the festival season because I want as many people to see it as possible because of the message,” Poiley shares. “I hope it will create a dialogue and encourage people to see the beauty in what we can accomplish together.”

He credits all the sponsors for making this one-of-a-kind project possible. “Just like in Sound Language how it takes unity to make the miracle, same thing with all the sponsors that helped make this film possible — Só Dança, Dancewear Corner, First Unit, Pastry and ROAR Organic. Jon and Rosemary of Dancewear Corner are the ones who really believed in me enough to get this going. They’re the ones who went to Só Dança, who so generously funded equity, clothing and talent, and to Pastry, who donated shoes. So we had amazing people who came together who believed in this vision.”

Dancewear Corner (DWC) President Jon DeMott notes, “Dancewear Corner was excited to partner on this amazing dance film project. As a company, we continue to explore ways to become more involved in the dance industry and provide the dance community not only with quality dancewear but with opportunities to perform, continue education and enjoy dancing careers.”

Keep your eyes peeled on Só Dança’s Facebook and Instagram pages for announcements and updates on this film. Poiley anticipates it will be released to the public sometime this summer or in the fall.