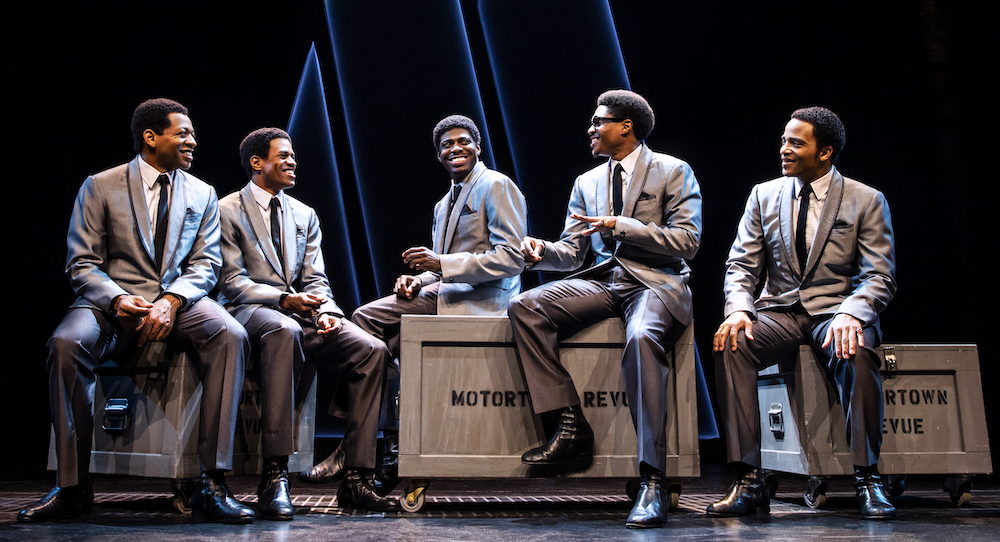 There’s only one word that can encapsulate Ain’t Too Proud: The Life and Times of The Temptations…smooth. Everything about Broadway’s latest jukebox production is charming, effortless and impressing, from the sexy smooth choreography to the intoxicating harmonies of so many of our favorite Motown hits.

A turn-table and downstage conveyer belt panel incorporate this smoothness in the show’s stage design. Actors, props and sets shift seamlessly on and off stage. Sometimes it’s enchantingly hard to tell if the dancers themselves are moving or if the stage is moving them. 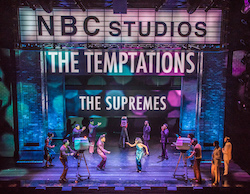 Sergio Trujillo serves as choreographer and proves he is truly the go-to guy for pop period pieces (as shown through his recent resume of shows like Memphis, Summer, Jersey Boys and On Your Feet). The Temptations were known for their sweet sounds and sick moves, and Trujillo translates the intimate in-sync movements to the big Broadway stage. I was honestly expecting many different iterations of a simple “step-touch.” What Trujillo brings to the quintet is dynamic, informed and exciting. Ephraim Sykes blows the audience away with his bravura and ease. Several times, he tosses his microphone into the air, drops down into a split, magically slides back to his feet, and catches the mic as if it were as normal to his routine as brushing his teeth. The equally captivating James Harkness doesn’t necessarily showcase the same applause-inducing skills as Sykes, but I could watch him move all day long. The three other leading men, Derrick Baskin, Jawan M. Jackson and Jeremy Pope are the epitome of triple threats and all embody the style and charm of their legendary band.

Ain’t Too Proud’s book is also smooth, although not necessarily in a ground-breaking way. The show follows the inventive and successful formula of JERSEY BOYS (which makes sense given much of the same creative team).  We’ve got the founding band member as narrator and songs spliced and interspersed within the storyline to move the plot along.  While this enhances the flow of the biographical show, it is so commercially digestible (almost always tellingrather than showing) that, as an audience member, I felt like I wasn’t given autonomy to think and process the material for myself. The history, successes, and many, many tribulations of The Temptations add a whole new depth and dimension for audiences who might only be familiar with their chart-topping hits.  But the copy-paste formula of the book failed to exemplify the innovation and impact of the band itself.

While the book of AIN’T TOO PROUD left me begging for something more, the show itself is a surefire hit. With songs we know and love (over 30, actually), vibrant choreography, and a cast so talented you’ll want to throw your shoes at the stage, AIN’T TO PROUD will inspire audiences to take a deeper look behind the music they thought they knew while also leaving them dancing and singing through the aisles.