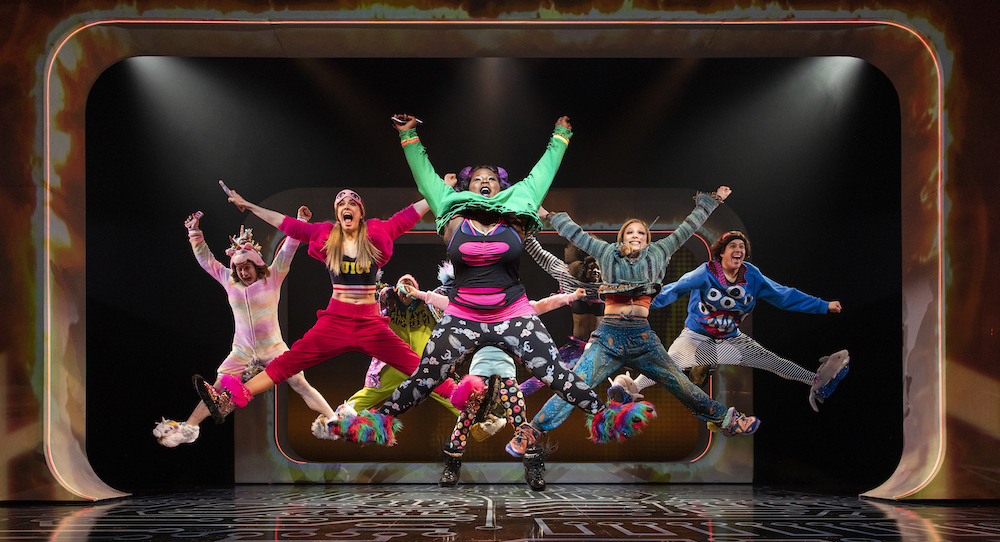 I suppose I’m not very chill. Perhaps I’ve reached that age where I just don’t get the shows all the kids are raving about. And I’ll admit it outright — I don’t get Be More Chill. With an insane fan following before the show even opened on Broadway, I was expecting the next Dear Evan Hansen with spellbinding songs and a poignant, thought-provoking story. What I experienced in Be More Chill was both everything I’d seen before but also something entirely different (but not in a good way). 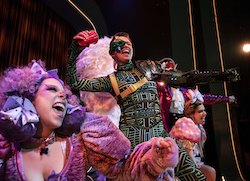 Lauren Marcus, Will Roland, Katlyn Carlson and the company of ‘Be More Chill’. Photo by Maria Baranova.

To summarize the gist of the plot, an insecure, geeky high schooler named Jeremy is persuaded to ingest a pill containing a supercomputer that attaches to his brain. The squip tells him what to say, what to do and how to act “cool.” Jeremy ignores his former dweeby friends due to the squip’s optic blinder, he acts like a jerk toward his well-meaning dad and is effectually compelled to hook up with a popular girl, even though Jeremy’s real affection lies with the loud, proud and goofy theater nerd, Christine. I won’t give away if Jeremy ever frees himself from the squip and the perils of popularity…

Chase Brock (Spiderman: Turn Off the Dark) choreographed Be More Chill. The dancing of the high schoolers feels almost improvisational — very natural to how each of these characters inherently move. In an interview with Suzanne Bowling, Brock explained how the movement of “The Peanuts” inspired much of the quirky, fun, pedestrian dancing in the show. Periodically, the ensemble dons silver jumpsuits to personify the tiny micro-computer squips. Their digits-work and finger tutting choreography illustrate the highly-technical and hypnotizing quality of the squips themselves. While this was a memorable dance moment in the show, I felt that the baggy body suits distracted from the delicate finger ‘ography. I would’ve loved light-up or glow-in-the-dark gloves to really accentuate the movement. Another fun scene is Brock’s cheerleader/sleepover party-inspired choreography in “The Smartphone Hour,” a modern-day take on Bye Bye Birdie’s iconic “The Telephone Hour.” Other trendy dance references (like “the floss”) will also have younger audiences excited for Be More Chill choreography. Stay tuned for “Squip School” how-to dance videos that Brock promises will hit YouTube very soon. 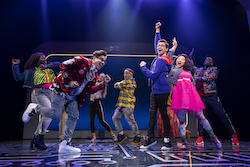 The cast of ‘Be More Chill’. Photo by Maria Baranova.

Alas, Be More Chill just skims the surface. I don’t understand why it’s so hard for musicals to get high school right. We’re still stuck in the simple stereotypes of popular girl cliques, gaming nerds and misunderstood jocks. Every teen-themed musical currently on Broadway tackles the topic that will probably never die: the utmost desire to fit in with the cool kids. Some shows have worked hard to portray today’s reality — Dear Evan Hansen certainly comes to mind. Bullying is much more subtle (but 10 times more traumatic) than shoving kids into lockers.

Don’t get me wrong, it’s wonderful that shows like Be More Chill are resonating so deeply with younger audiences. But with everything going for the show — the silly story, catchy tunes, trendy choreography and parody humor — I was disappointed that all the fluff (the jokes, colloquial language, contemporary references) covered up the fact that they didn’t say anything new at all.