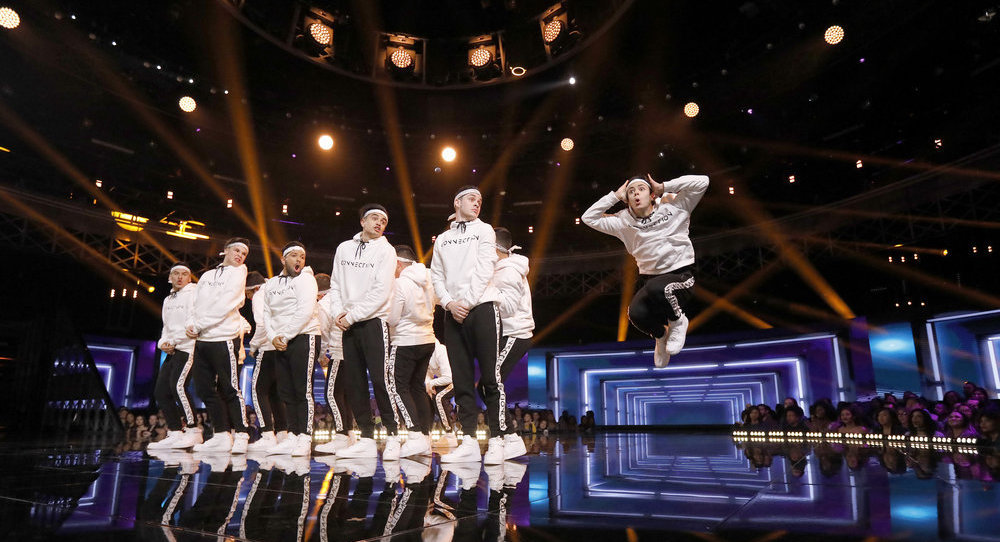 The fight for survival continued as more groups took to the World of Dance stage in hopes of securing their spot in The Cut. It would take a combination of talent, precision and power to wow the judges, and there was no shortage of these three traits as heavy contenders went head to head in what would be one of the most memorable duels of the season. 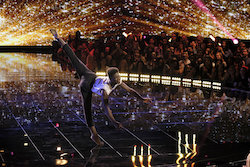 First to hit the stage was Jaxon Willard vs. Lucas Marinetto. It was tap against contemporary as these two talented boys left everything they had on the stage in hopes of making it further in the competition. Lucas was first to perform, and he was just as charismatic as he was in The Qualifiers. His routine had a Gregory Hines feel to it with some great rhythms mixed throughout. He brought a suave approach to his tapping, and the cleanliness in each sound made his performance magic. It was refreshing to see Lucas take on some old school tapping and mix it with the new school. The judges were pleased that Lucas listened to their notes from the previous round, and they saw a great improvement. Jaxson Willard brought a personal story to his contemporary routine. As he depicted the struggle of real mom vs. birth mom, Jaxson’s performance was a catharsis of emotion and a tribute of sorts to the family he has now. The performance was the epitome of power and vulnerability with athleticism and poise within each leap and effortless turns from Jaxson. His performance brought the audience, as well as the judges, to tears. Although both soloists brought their A-game to The Duels, with a score of 96, Jaxson will get to spread his wings further in The Cut. 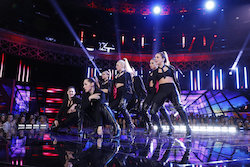 ‘World of Dance’ Duels competitors Marissa and the Heartbreakers. Photo by Trae Patton/NBC.

Next to light up the World of Dance stage was Poreotics vs. Marissa and The Heartbreakers. Destined to bring something completely new to their performance, Poreotics gave their routine a “beach yoga” theme. They brought a comical sassiness to their routine as they mixed in waacking and other styles to start out. In true Poreotics fashion, there was also great robotic movements and signature moments that they are known for that brought their performance to another level. They served great visuals and pictures through each transition and offered some great partnering tricks that served as the icing on the cake to an entertaining routine. Marissa & The Heartbreakers brought true meaning to the word “boss” with yet another routine embracing girl power. By mixing up jazz with hip hop this go around, they brought the perfect amount of sassiness and power to the stage. There were some great elements to this performance, including even more amazing contortion tricks, along with a gritty yet sophisticated vibe to their entire performance that elevated their routine. Although it was a close call, Poreotics came out on top and earned their spot in The Cut round. 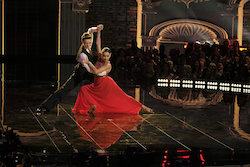 The Duels continued to heat up as ballroom duo Jonas and Ruby went head to head with Freshh. Freshh was first to show the judges what they were made of, and they decided to do so with a throwback to the ’90s. They brought character along with fun to the stage with their old school hip hop routine. This proved to be a great risk for Freshh to take, as they mixed in old school and new school movements throughout the routine. Their footwork was great, along with precision and energy that was through the roof. Jonas and Ruby switched up the mood with an Argentinian tango, arguably one of the hardest styles of ballroom dance. This duo showed both maturity and great musicality as they effortlessly glided across the stage. There were surprise costume changes throughout their routine as well, which elevated the entertainment quality to another level. Jonas and Ruby were electric in their partnering style as they brought amazing lines and footwork to their performance. Along with wowing stunts, they delivered something that was unexpected and kept the judges on their toes. Their electricity seemed to flow through to the judges and into scoring because, with a score of 91.3, Jonas and Ruby continued to set the bar high with a score of 91.3, moving them into The Cut. 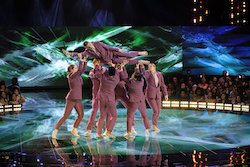 Keeping up the exciting pace of The Duels was Pursuit vs. The Ruggeds. As the only adult breaking crew in the competition, The Ruggeds brought an old school yet funky feel to the stage. While applying the notes from the judges in The Qualifiers, The Ruggeds incorporated more dancing within their breaking routine. There were some great breaking transitions throughout their performance, along with innovative transitions using signature breakdancing movements. They had the right amount of entertainment to grab the attention of the judges and audience alike. Destined to bringing a different feel to contemporary, Pursuit stayed true to their mission with yet another abstract contemporary routine. They brought a touch of hip hop to their routine while keeping true to their unusual yet innovative style of contemporary. Pursuit brought intensity with each movement that was complemented by their facial expressions, and they topped off their routine with precise movements and great transitions to match. Although it was a tough judging call, The Ruggeds managed to bump Pursuit out of the competition with a score of 84.7. 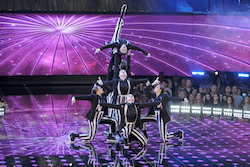 The next match-up made for an exciting duel as three groups faced off against one another to see who would move on to The Cut. It was Cubcakes vs. Dem’ Raider Boyz vs. Flip in a three-way Duel that would make the judges’ job 10 times harder. Flip, the only waacking team in the competition, was first to hit the World of Dance stage and hoped to up their game and the style of waacking all together compared to their first performance. Decked out in costumes similar to a composer, Flip started their routine with orchestral music that slowly transitioned into a hip hop back beat. There was fire in their hands as they hit every movement with precision and power. It was intense from start to finish and kept the attention of the judges as they told a story from the wardrobe right down to the dancing. Flip offered some great visuals, which added to their overall entertainment quality, and they took waacking to a different level with this particular performance. Up next was Dem’ Raider Boyz, a step team of high school students. Dem’ Raider Boyz served great rhythms from one step to the next. Their routine was fun yet upbeat from the beginning, and their energy was electric as they stomped the floor. Their sounds were equally amazing acoustically and remained on the same energy level as the music. As the youngest group in the competition, the cute yet fierce Cubcakes were last to take the stage in the three-way duel. Although they were one team member down due to an injury during practice, Cubcakes brought that same sassiness that the judges loved so much in The Qualifiers. They were clean through each movement and transition and topped off their performance with attitude that was out of this world. The song choice added the perfect touch to what was an amazing routine. These three talented acts didn’t make judging any easier for the judges, but in the end, Flip came out first with a score of 90.3 and will get to show even more great choreography in The Cut. 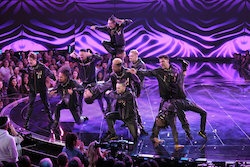 Closing out the night were two heavy contenders — Connection vs. Funkywunks. As groups who both came to fight, this was by far the toughest for the judges as far as seeing one team go home. In the spirit of risk-taking, Funkywunks took on a throwback number to MC Hammer’s “Can’t Touch This”. Not only did they bring signature moves from the popular ’90s music video, but they made it their own by mixing in new and well-known movements in hip hop. Funkywunks were innovative in their transitions and stepped up their game with great stunts and elements, including a human carousel, which added to the entertainment aspect of their performance. Connection came to the stage with the same fighting spirit to their routine as well. They took a comical approach to this particular performance, but it worked in their favor. There was a mixture of grooves and popping, along with that signature Latin flair to hip hop that the judges loved so much. The entertainment quality of their performance was undeniable, and they left the judges with a hard decision to make. Coming within .3 points of each other, Connection will continue to The Cut round.

The last round of The Duels will be one to remember. Don’t miss out on even more great acts, and see who will make it through to The Cut. Tune in!