“I can always spot a dancer who’s not comfortable dancing in heels,” says Broadway choreographer Josh Bergasse (On the Town, Charlie and the Chocolate Factory, Smash). But walking in heels — let alone dancing in them — does not come easy. Whether partnering in ballroom competitions, touring with famous pop stars, kicking at Radio City Music Hall or tapping in a Broadway musical, dancers must master the skill of performing in heels. And it’s not just a technique required of female dancers. With choreographers like Yanis Marshall and shows like Kinky Boots and La Cage Aux Folles, it’s becoming more prevalent for men to master dancing in heels as well. 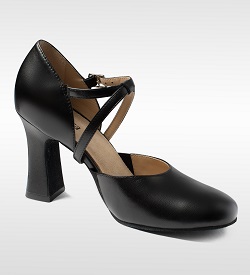 Maintaining good posture, centered alignment and ankle strength are all important when dancing in heels. But with any style of dance, a good pair of shoes are vital; they’re part of your instrument. “A good character shoe gives a dancer support and stability,” Bergasse describes. “It should be made of quality material so it doesn’t need to be replaced often.”

Previously, donning a quality pair of character heels was a significant financial investment — upward of $200 for your basic tan two-inch heel (and that’s before adding taps, rubberized soles or any accoutrements like heel brackets or extra straps to make the shoes last a bit longer). But Só Dança’s new Broadway – Cabaret Collection offers both superior quality and greater affordability.

Só Dança recently filmed a promotional video at Broadway Dance Center where Bergasse led a mock audition for a class of professional dancers who had the chance to test out these new character shoes in the studio.

“I love how grounded I feel in the shoe,” remarks one Broadway dancer. “I’m dancing in a three-inch heel, but my weight is perfectly centered. I feel as confident as I do in flats with the added benefit of longer lines.”

“Só Dança has created a versatile shoe that securely molds the foot so you are free to dance any movement that is asked of you,” describes another Broadway dancer. “The shoe can transfer seamlessly from slick to sticky floors and has a clean, professional look.” 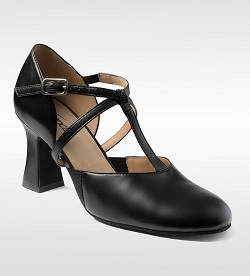 In an audition, you never know what to expect. Will I be dancing on Marley or wood? Is there a ballet cut? How fast will the combination be? You can’t control any of these variables, but feeling comfortable and strong in your dance shoes is something you can. “Dancers must train in heels if they expect to get through a Broadway audition and rehearsal period,” adds Bergasse.

Just like a ballerina en pointe, your shoes are part of your instrument — and remember…practice makes perfect!