In art, culture, politics and more, we’re seeing young people assert their voices – despite criticism, despite scarcity of resources and established credibility, despite significant uncertainty of outcome. A dance friend of mine recently made a compelling assertion: “This new generation [of dancemakers], they’re not waiting to create. They’re just going for it.” This daring spirit, this desire to create from a unique personal voice, was front-and-center at Dixon Place’s Under Exposed. 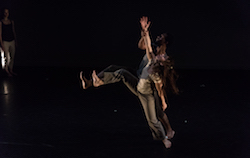 It’s a show series with the specific aim to exhibit and support emerging choreographers who’ve demonstrated innovation and vision and could use further exposure in order to see their notable work more well-known. Heather Bryce Dance Company performed first, under direction and choreography of Heather Bryce. They first danced Cease, a thoughtful and multi-faceted work depicting the Christmas Day Armistice of 1914.

I saw the work differently than I did the first time I took it in; sitting up higher than the stage allowed me to appreciate formation shifts I hadn’t noticed the first time.

Next, Dana DeFabrizio danced Medication List, an emotionally arresting work. She stretched her mouth, shook hands to elbows, and fell to the ground with not a hint of hesitation. She gave her whole self to the piece. Musical lyrics clued me into the meaning – “morphine, codeine!” the singer yelled.

Aggression in the music met unsettling thrashing in DeFabrizio’s movement, localized in a center stage spotlight. The music wound down, and she fell to curl into herself. Powerfully, the lights drew down on her there. It seemed as if the only thing left was pain – the inevitable low after drug-induced high. I’d be compelled to see this work take up more stage space, how the striking qualities of its movement would translate to that which travels.

Georgia Gavran and Jonathan Doherty followed with “on display: millennial pas de deux”. I’ve never laughed so much watching dance! Good-natured joking met smart, economical movement and structure to keep me captivated. They began standing center stage in stained white shirts and black jeans, with sprouting carrots in their back pockets. They each pulled out a carrot and chewed, and – in a very cleverly-postmodern way – stared at the audience in defiance of an expectation to offer “more”.

In this alignment with stereotypes about millennials, audiences members chuckled even louder. In this continued challenge of codified virtuosity, they shifted poses while chewing. Gavran went under Doherty’s legs in wide stance, lying casually, and then they switched. The Black Eyed Peas’ “My Humps” rang out next (a millennial favorite), offering a bit more technical movement – yet that offered with ease and grounding. They cloched back and front in rhythm with the music, relevéed in forced arch, and leapt in an à la seconde pop-up.

When not offering this movement, the object of their chewing moved to Twizzlers – standing in contrapposto, one hip out, with utmost casual confidence. The music cut out, and – in wonderful comedic timing – they continued chewing and facing the audience. “Les’ do’it”, the music asserted, and they dropped their carrots as the lights cut out. It was one of those comedic moments that must be experienced to truly appreciate. Some of the best comedy is, its efficacy somewhat inexplicable.

The next song brought further technical movement, that which was smoothly blended with more pedestrian movement – arms noodle-like swinging back and forth with standing in a fourth position relevee, to stag leap and turn. Music came in and out to contribute an unpredictable feeling. They reached up and said “Snooze!”, then repeating the sound and movement.

Snoop Dogg sang out “Drop it like it’s hot!” and they dropped to the ground as the lights cut out. Just as it did throughout, a context of stereotypes about millennials made this cleverly humorous. Furthermore, the piece demonstrated that physical comedy in dance doesn’t have to be cheap or silly – it can be smart and meaningful, while also bringing pure joy. 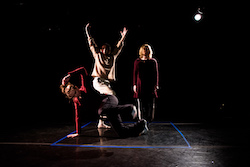 “Saudade DaRosa” by Alexandra Rose was captivating in an entirely different way – making me think, question and reflect. It opened on a spotlit soloist, the sounds of ocean accompanying her movement. Two dancers entered on the other side of the stage to accompany her. They offered movement on various levels and speeds, with certain motifs such as bent-elbowed “cactus arms”. The smooth classical guitar of Portuguese fado music rang in, followed by the return of ocean sounds.

Next, we heard a voice, which I later learned was Rose’s. She spoke of forced disconnection from her Portuguese ethnic identity, of “longing for something that you never knew in the first place.” The movement complemented this sense, with circling and spiraling creating a feeling of searching and restlessness, a need for something unseen. In other notable phrasework, the dancers tucked in from wide plank to rise and turn with arms in a “T” shape.

In another phrase, one hand came from above, the other from below, to meet at the heart along with a deep fifth position plié. There were also striking moments of stillness – two of the dancers in stillness, standing perpendicular to each other in a wide, parallel second position and gazing outward with focused intensity. They then continued their looping, spiraling movement, this time in clear opposition to one another.

As a viewer, these moments of stillness sandwiched between continuous movement are always powerful for me personally. In stillness, we can see the dancers’ chests move in deep, quick breath and imagine their hearts racing. Their physical commitment is tangibly evident. When they begin dancing again, what they’re putting into their dancing is all the more to be appreciated.

Soon after this section came something just as striking – the hauntingly beautiful voice of a fado singer. Along with this, in a last bit of searching, one dancer turned Whirling Dervish-style, arms outstretched to the side and palms open to the sky. She turned into the floor to skim across it. The two other dancers joined her to move on a higher level. The water narration returned, as did Rose’s voice repeating “yearning for something you’ve never known, and never being able to get it back.”

Lights faded, with the sounds of the ocean continuing. Water is life, and the cyclical nature of both will continue despite that yearning, I thought. On a more literal level, ocean stands between the narrator and the homeland and culture for which she yearns. Rose dared to dive deeper in exploring these multi-layered, metaphoric aspects. Kudos to her and the brave emerging artists in Under Exposed, and all artists out there, who take on risky creative exploration – especially without the establishment that longer years most often brings. The world can be a bit brighter, a bit more aware, because of it.