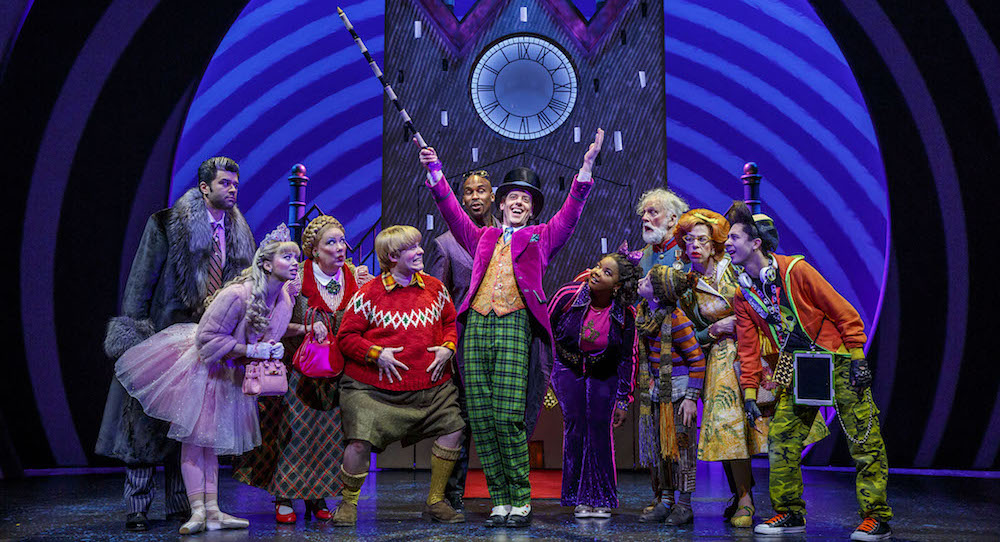 It’s tricky to bring a well-known and well-loved story to the Broadway stage. Whether adapting a book, film or folktale to a live musical, it’s a challenge to stay true to the original while also bringing a new vision to the story. One of this season’s most highly anticipated new musicals is Charlie and the Chocolate Factory. The story has stood the test of time (and genre) — from the original book written by Roald Dahl in 1964, to the 1971 film starring Gene Wilder and the 2005 film starring Johnny Depp, making it to the stage on the West End in 2013, and finally opening on Broadway in April 2017. 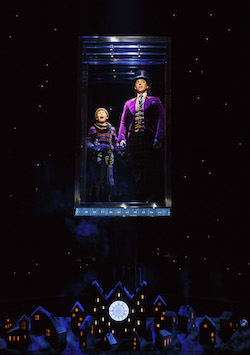 Roald Dahl’s ‘Charlie and the Chocolate Factory’ on Broadway. Photo by Joan Marcus.

In the Broadway adaptation, audiences will certainly recognize and remember the story they fell in love with: Charlie Bucket finds a golden ticket in his Wonka chocolate bar, scoring him — and four other lucky kiddos — a tour of Willy Wonka’s magical chocolate factory, led by Mr. Willy Wonka himself. But this show takes on a modern day twist (where Violet Beauregarde is “the queen of pop” music and gum, and Mike Teavee is obsessed with Instagram, Snapchat and live-tweeting). Another new element for the stage version is the use of choreography to accompany both the movie’s songs (like “Candy Man” and “I’ve Got a Golden Ticket”) and a number of new songs added to the score. Dance Informa spoke with choreographer Josh Bergasse (On the Town, Gigi, Sweet Charity, Smash), about his work on this sweet new musical.

What’s your choreography routine when starting a new project? Do you do a lot of research, lock yourself in a dance studio alone, listen to the music, or work with a skeleton crew of dancers? How do you create?

“I research the story, the style, the location, the time period and the characters’ backgrounds. I get to know the music intimately. And I try to plan it out in my head, try to see the styles and the pictures in my head. Then, I get into a studio with a few dancers and we come up with some movement, and usually a few different versions so that I can weed through what actually is helpful to the story and successful for the production and what isn’t.”

Your recent choreography projects have been based in reality/real life. How was it different to choreograph the fantastical, magical world of the Chocolate Factory?

Josh Bergasse with his fiancée, New York City Ballet Principal Sara Mearns, on the red carpet at the opening of ‘Charlie and the Chocolate Factory’. Photo by Tricia Baron.

“Charlie was a really exciting project because the rules were different; actually, there really were no rules. Because it’s a magical world we could just let our imaginations run wild and create some crazy production numbers and scenarios, sometimes with only the laws of physics standing in our way (and budgets, too!).”

You’ve worked on a number of shows — including Charlie — that were based on a well-known film, story or even an original musical. How do you draw on these as inspiration and then make the work yours?

“When I’m doing a revival or something based on well-known source material, I try not to get too caught up in the past productions or past material. I like to know the history of the material, but then I try to clear my mind and focus on the story that needs to be told and the specific cast I’m working with. When we did Sweet Charity, we choreographed that show for Sutton Foster, who’s very different than any other actress to ever play that part. So, you see, it naturally evolves into something new. Similarly, Christian Borle is different than any other actor who’s played Willy Wonka, so his talents help to shape what this version of Charlie and the Chocolate Factory became.”

How has Charlie evolved from the 2013 West End production?

“There are many significant changes from the West End production. The Broadway Charlie has a new Director (Jack O’Brien) and choreographer (me). It also has some new original songs as well as additional songs from the original 1971 film. The script has been retooled, and the shows sets and costumes have been completely redesigned.” 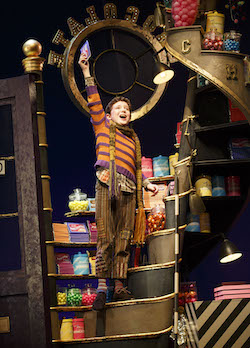 Ryan Sell in Roald Dahl’s ‘Charlie and the Chocolate Factory’ on Broadway. Photo by Joan Marcus.

“Well, I can’t say much about the Oompa Loompa’s. As everyone knows, they can only exist inside the factory! So anyone who wants to know more about them will have to come and see our show. But I can tell you that it was a wonderful collaboration with the brilliant puppet designer, Basil Twist.”

Each golden ticket-yielding child has his/her own movement vocabulary — Bavarian-dancing Augustus Gloop, classical ballet for Veruca Salt, hip hop (and dabbing) Violet Beauregarde, and eccentric cheerleading for Mike Teavee. How did you take each of these iconic characters and develop his/her unique styles with a contemporary feel?

“I was really inspired by the Shaiman-Wittman songs and how different they were for each of the Golden Ticket winners, so I created dances to fit those songs. For instance, for Augustus Gloop, they wrote a type of Bavarian yodeling song. So I researched Bavarian folk dancing and found this wonderful slap-dancing style online. Then I started thinking about cuckoo clocks, and I put that together, and it made an odd and delightful pairing that worked well with the song. And so was the process with the others.”

“As a child, I was a huge fan of the 1971 film and especially Gene Wilder’s whimsical performance, so that film informed my choreographic style for this production consciously as well as subconsciously. I also looked at the 2005 film and re-read the original Roald Dahl book. It was very helpful to have all that information and serves as an example of how there can be many versions of the same story. But then, like I mentioned earlier, I tried to clear my mind a bit so I can start to choreograph our version on our cast. All in all, I’d say you might be able to find little pieces from all the different source material in our production.” 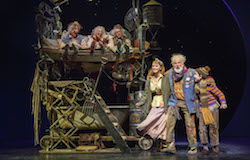 Roald Dahl’s ‘Charlie and the Chocolate Factory’ on Broadway. Photo by Joan Marcus.

And last but not least, can you let us know about your next project?  What’s coming up for you in the future?

“The day after we opened Charlie and the Chocolate Factory, I started rehearsals for The Golden Apple at City Center Encores! That production opens on May 10. After that, hopefully I’ll get a little downtime!”

For tickets and more information about the show, visit www.charlieonbroadway.com.