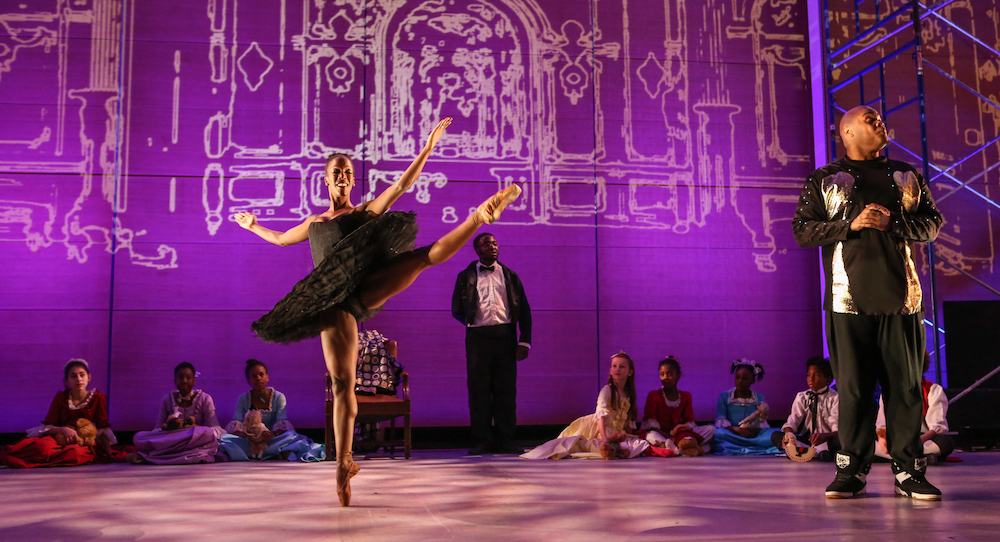 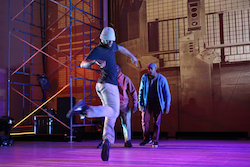 The idea for this rendition of The Nutcracker was largely born from a Drosselmeyer interpretation that emerged during Parkerson’s choreographic process for a group of local Brooklyn dancers to perform during a tree lighting celebration. “One (local dancer) was a very big guy with robotic pop and lock movement,” she recalls. “The idea was that he could be a mad scientist and create a doll. We took the Brooklyn Ballet dancer’s regular doll dance and made a story in one rehearsal. He carries her in and makes her come to life, and then she breaks. He gets really angry, but at the end he gives her his heart. The two different styles moving together left people fascinated and thrilled. It also led to a lot more thoughts about Nutcracker scenes and how everything could tie in and make it ‘Brooklyn’. The first act of the ballet is set in old Dutch Brooklyn. The second act is contemporary Brooklyn. The story is evolving each year. We haven’t dispensed with the (traditional Nutcracker) story, but it’s not mainly about that old story.”

Production elements of The Brooklyn Nutcracker are as visionary as the choreography. Avram Finklestein, art direction/set design, comments in an online video that he works to “relate disparate elements in one production.” Parkerson adds, “Our set is all projected. The art director/set designer has found beautiful images, and sometimes the scene will become animated. It’s super high resolution. I don’t like to half-do anything. [Finklestein] really understood. He grew up in Broooklyn and was really excited about being able to do this. This combination of old and new is what this Nutcracker embodies. It’s fun visually. There’s a lot of great imagery and texture that embraces and frames the dancers. The set has movement but does not overpower. [Finklestein] has been working with me for a long time. He began working in costumes and moved into the set. The choreography ­­­and the projection really bring the aesthetics together. [The process] works well with this ballet especially.”

Technology is further incorporated into the show through motion-activated lights on some of the costumes. Parkerson explains, ‘The Snow costumes are built this way. When the dancers stop moving, the lights drift out in a snowfall pattern. Drosselmyer has a shirt that lights up during his pop and lock movement. This allows people to see what he’s doing even from far away and allows for a much bigger feel to what he is doing. The Flowers have fiber optic tutus. When the lights go down, you really see the strands of colored fiber on their costumes.” These technological details seem integral to the interpretation of the ballet by adding another visual layer to this very modern re-visioning of a classic story. 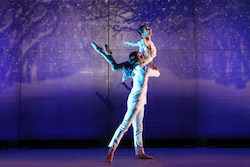 The Brooklyn Nutcracker casting is also representative of Brooklyn, in large part thanks to its company’s diversity and new talent being regularly added through its school programs. Catherine Green, director of Elevate, the program dance residency program through which public school students receive six to eight weeks of hands-on ballet training shares in a video that the Brooklyn Ballet achieves “excellence through inclusion”. She elaborates that this is “historically a radical idea in ballet”.

Parkerson adds, “The Brooklyn Ballet started out as a program that went into schools, and we performed in schools, primarily in the outer boroughs. At that time, Brooklyn was completely segregated.” It was crucially important to Parkerson that the group of professional dancers the company was taking into the schools was diverse. “We have a diverse company, so when we performed [in the schools], we were not a group of people who did not bear any resemblance to the people in the schools. We bring dancers who look like the kids. We talk about what movement is and what ballet is and show Baroque dance next to contemporary. We also teach the history of ballet with mostly African American dancers in the roles. I can do that, we can do that. After the performances, students have five weeks, or so, of­­ ballet classes. We give scholarships, and our school is filled with incredibly diverse dancers and a lot of boys, too. These kids also dance in The Brooklyn Nutcracker. It’s through education that we provide that.”

Parkerson adds that pricing prevents many potential dancers from training. “There are programs you can pay for, but it’s very expensive. Ballet schools are very expensive now. Many people cannot even consider it. Our prices are 50-75 percent less than major ballet academies. We’re trying to give people an experience of ballet and dance. There is the example of the professional at our studio. Many of our dancers are ex-Dance Theatre of Harlem company members. From the very moment I started the company, I wanted the company to look like the borough. There’s no dearth of dancers in New York at this time. There are some fantastically trained dancers that should be seen more”. She adds that the Brooklyn Ballet is able to provide them that exposure.

The Brooklyn Ballet and The Brooklyn Nutcracker are obviously labors of love for Parkserson. “I started training late up in Boston and didn’t have the parents who were bringing me to dance,” she says. “In the sixth grade, someone in my class was a ballet dancer, and I was determined to figure out how to train. I had memories of loving ballet when I was small. I just had to do it myself. I took the train into the Boston Ballet, and I took lessons in the small town I was in. It was hard, but I worked like crazy. I was 5’6” and had no extension when I started. I worked to the point that I was able to be in the corps de ballet. I danced in Europe and eventually moved back to the States, and by that time I was choreographing. When Dance Theatre of Harlem folded, there was so much conversation about desegregating dance companies.” 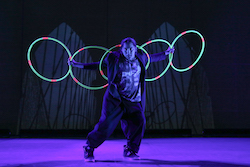 She adds that it was a “no brainer in 2002” that if “we’re going to call ourselves Brooklyn, the company dancers must reflect Brooklyn’s diversity. I was excited by the idea of building audiences around ballet. At one point, I went to see a dance performance and a talent show and was more entertained by the talent show. Those who knew and danced the works, it’s always exciting for us. What kind of experience is it for you if you haven’t had any exposure or danced yourself? I love Balanchine and Merce Cunningham, but after all that, to me there was not a lot of real excitement. Bringing communities into the process and bringing results of the process into the community creates lively and energetic product that more people relate to and enjoy. It’s innovative.”

Parkerson continues, “I like to move in new directions instead of just redoing what’s been done before or making what’s been done before more complicated or just faster. My goal is to attract new audiences; people who love dance will go see dance. If you’re not obsessed or fascinated with it, why would you go if it’s not bringing things together or conceptually bringing something that connects with people and where they are?”

For tickets and more information on The Brooklyn Nutcracker, which runs December 7-16, visit brooklynballet.org/performances/2017/brooklyn-nutcracker.