A new YouTube Red drama series entitled Step Up: High Water was announced in June. With much fanfare, it was reported by major entertainment publications that Channing and Jenna Dewan Tatum were executive producing the 10-episode show and that it would be based on the beloved Step Up franchise. Its storyline will center on the famous (but fictional) High Water Performing Arts School in Atlanta. 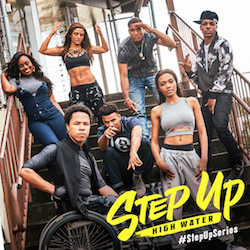 While the official release date is still a mystery, the majorly talented cast has managed to keep the dance industry super excited. Three cast members recently opened up to Dance Informa about their characters, the filming process, the choreography featured and why the dance community doesn’t want to miss this brand new series.

Marcus Mitchell, who Dance Informa last featured in 2015, filled us in that since High Strung premiered in January 2016, he’s been busy with many other projects. In Step Up: High Water, he plays Dondre Hall, a character he describes as “the big brother figure of the show” who plays “a vital role” in presenting the two leads, Tal and Janelle, to the Atlanta underground party scene. “He’s his own man and one of Atlanta’s finest dancers,” says Mitchell.

When asked what filming Step Up: High Water was like, Mitchell explains that it required five months of shooting on location in Atlanta, and it was a great learning experience.

“I couldn’t have asked for anything more. It was a dream come true,” Mitchell says. “However, it was a challenge, because apart from other shows, remembering lines every week wasn’t your only job. This required numerous hours of dance rehearsals and preparation throughout the week. I’m so grateful to the mentors and teachers throughout my life who instilled discipline in me and taught me the value of leading by example; i.e. hit your mark, do the work and know your lines.”

Dancer Lauryn McClain plays Step Up: High Water lead character Janelle Baker, whom she defines as “an ambitious, head-strong dancer who doesn’t like the word ‘no’.” She agrees with Mitchell that the show’s filming process was a challenge.

It gave her the opportunity to return to her hometown of Atlanta, but she said that the “the shooting process took a lot of hard work, focus and dedication”, so she was glad her family was there to help her through it.

It was McClain’s first time working on a major drama series. “My sisters had both worked on major TV shows, but I think what I learned the most from this show was to always stay true to myself,” she shares. “No matter what and unapologetically stand up for what I believe in. Janelle was constantly going through tough things, and it can bleed over into real life sometimes. It was definitely a challenge to learn a lesson as Lauryn off screen and as Janelle on screen!”

One cast member who certainly stands out is Eric Graise, a double-leg amputee who plays the character of King. Graise explains that his character is a DJ, rapper, singer, dancer and “pretty much anything-you-need kind of artist.” Like many of the other characters, King is a student at High Water, and he’s incredibly talented at his craft. “He’s a headstrong guy and all about his hustle. He’ll do whatever it takes to make it,” Graise says. 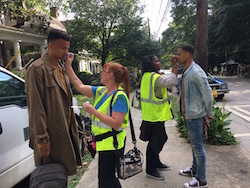 Dancers on set of ‘Step Up: High Water’. Photo courtesy of Marcus Mitchell.

For Graise, the filming process was also trying, but in a different way. He recalls that he came into the project a bit dazed from having just completed a tour to Spain with Full Radius Dance, a physically integrated modern dance company based in Atlanta. Graise felt like as soon as he got back to Georgia he was in front of the camera. Luckily, he easily clicked with King’s story.

“The character was so much of who I was already; the whole thing just felt natural,” Graise says. “And that’s actually different than what I’m used to on stage, where I normally play characters who are much larger-than-life and vastly different than myself.”

Working on Step Up: High Water was a completely new medium for Graise and he was nervous, but he says that once he arrived on set and saw how “chill and helpful everyone was”, it really didn’t take that long to adjust.

“I’ve definitely enjoyed working with everyone, and I’ve made some great lifelong friends in the process,” Graise shares.

Graise and the other dancers worked with various choreographers for the show. According to Mitchell, the pilot was choreographed by Jamal Sims, but later episodes were taken over by Jamaica Craft, who was assisted by Marc Iniss and Kiki Ely.

“The styles and trends the show emphasizes are that of Atlanta’s own,” Mitchell explains. “They really wanted to embody the culture and atmosphere of Atlanta within the show and make that a vital aspect of our characters’ world.”

McClain says that all styles of dance are represented in the show, too – from Atlanta street dance, to contemporary, to African. She gushes that it was inspiring to watch the various choreographers at work and to learn from them. “I think people will enjoy the different styles of dance that are shown and executed so well throughout the show,” she says. 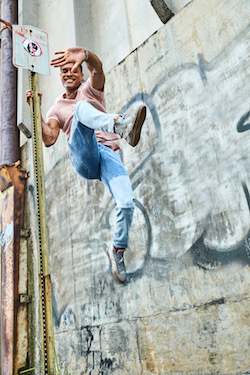 Graise thinks viewers will enjoy seeing his unique movement style and how it diversifies the choreography in a special way. “I’m a double leg amputee with an ‘at the knee’ amputation, and I’ve had this amputation since I was one. In life, I generally use prosthetic limbs, but the character of King uses a wheelchair as his mobility device,” he explains.

Working with Full Radius Dance had definitely helped Graise prepare for his role dancing in the wheelchair. He expounds, “The thing about dancing in a chair is that you not only have to know your body, but you also have to become one with this piece of equipment, and if you don’t use a chair on a daily basis, it can be even harder to learn.”

All three of these dancers can’t wait for the dance community to see the show and to enjoy their favorite scenes. For McClain, that’s the basketball gym dance scene in episode four. She divulges, “It was really like a huge party on set. My big sister Sierra came with me that day, and the power went out on location, so all of the background actors gathered in a huddle, and we just had one huge dance battle to pass the time. It was a blast!” 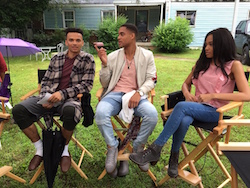 The three cast members weigh in with their final thoughts on why the dance community should be sure to watch this show out when it’s released.

Graise says, “If you’ve seen the My Dance Journey Videos on Step Up: High Water’s YouTube page, you’ll see I’m not the only actor who comes from a unique dance background. We all have stories. And I think that’s what’s great about Step Up being done as a series. You get all those big, amazing dance scenes that you’re familiar with from the movies, but now you get to go even deeper with these characters and dig more into their personal lives.”

He adds, “Also, this show touches base on so many dance forms, many of which were born right here in Atlanta, and I think any dancer would appreciate the authenticity the show brings. Plus, there’s drama, and who doesn’t like drama?”

McClain comments, “This version of Step Up shows the real, brutal truth about being a dancer. It doesn’t always work out for everyone. This show is true to that. And we all put so much hard work, time, sweat and sometimes tears into making these dance numbers look as amazing as possible. Jamaica Craft is a renowned choreographer who would not let us settle for just okay. She’s very big on feeling the dance, not just hitting all the steps. And when I watch some of our dances back, I feel good. That’s why I think the dance community will enjoy watching!”

Mitchell concludes, “In my opinion, it takes us back to why people first fell in love with the franchise. It captures the heart of dance and what it means to these complicated, complex, broken characters. It’s not just about dance numbers in this series, but what these young characters are dealing with in everyday life and how that art form is an escape for them, however that may look. You’re able to go along a journey with each individual character and see why they need to grab ahold of this freedom, how it can open one’s mind to a whole new world of opportunity. Our audience will be able to relate to someone’s, if not everyone’s, story within this series, and that is the biggest take away from what they’ve created.”

Stay tuned for the series’ official release date! In the meantime, enjoy the trailer below.