Until six years ago, Houston, Texas native Marcus Emanuel Mitchell had never trained in dance or performed professionally. Now, not even a decade later, he has toured with pop stars, danced on numerous awards shows, worked on various music videos and commercials, and assisted leading choreographers. Over the next year, he’ll be starring in three motion pictures, High Strung, Breaking Through and Odious.

When asked to recount some of the artists he’s worked with, names like Taylor Swift, Rihanna, Katy Perry, Ellie Goulding, Natasha Beddingfield, Beyoncé, Fergie, Gwen Stefani and Jennifer Hudson come up. When asked how he got to this point in his career, his smile widens.

“I really started dancing in college, but before that I would always love watching dance and trying to imitate it,” Mitchell explains. 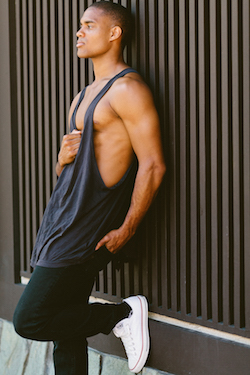 As it turns out, he was in college planning to study architecture on a basketball scholarship when dance really became his passion.

“I met a friend from Ghana who was a really good freestyler, and I started to dance more myself,” he recounts. “I slowly fell in love with it, and I started to look into whether they had dance classes on campus. To take these classes, you had to choose theater as your major, so that’s what I did.”

Even as a latecomer to the dance world, Mitchell soon found success. After connecting with some friends in New York City one summer, he found himself on set at Step Up 3D. Some of the assistant choreographers referred him to the choreographer of Stomp The Yard Homecoming 2, Chuck Maldonado. The film was set to be filmed in Atlanta and they were scheduled to hold auditions.

“At this time I didn’t know much about picking up choreography, because I was still just a freestyler. But they didn’t know that,” Mitchell says with a laugh. “I was told to come down to Atlanta to audition. So I went down to try out. After waiting for some time, I received a call that I got a spot. At first, I wasn’t even excited because I was so surprised. I also knew it meant that I would have to leave college because it was filming for three months. So in 2009, before my second year of college, I left.”

After the movie finished filming, Maldonado invited Mitchell to train under him in Los Angeles. Mitchell set his mind to training and learning. He assisted and shadowed a lot. He worked on shows like Nick Jr.’s Fresh Beat Band, Teen Nick’s Victorious and Disney Channel’s Zeke and Luther.

He remembers, “I never was one to be in class every moment of the day, though. Rather, I learned from job to job. That’s how my work ethic is – fully focus on something and just go for it. I learned a lot through trial and error, often learning from the veterans who I was on jobs with.” 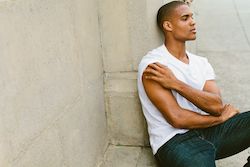 Soon Mitchell was receiving opportunities to perform with various musical artists, whether for individual gigs or long-term projects. “Around this time I met [music video director and choreographer] Fatima Robinson and started working with her,” Mitchell recalls.

Since then, he has worked with singers like Cheryl Cole, Estelle, Tinashe, Ciara, Jessica Jarrell, Jessi Malay, Melissa Molinaro, Carly Rae Jepsen, 5th Harmony, Becky G, Will.I.Am, Pharrell and Kelly Rowland. With Chayanne and Marc Anthony, he toured all over Central and South America for two years, performing in Venezuela, Guatemala, Honduras, the Dominican Republic, Mexico and “so many other beautiful places”, he says.

When asked about some highlights, one he recalls was touring with American Idol winner Kelly Clarkson when her song “Stronger” was big. “That was fun, especially that song, because we had to be bigger than life,” he says. Another one of his favorite jobs was working on the Soul Train Awards each year “because those were artists I grew up listening to,” he adds.

When recounting all these memories, he says, “It’s been a blessing. I can’t even put it into words. It’s by God’s grace that I’m able to do what I do.”

Now Mitchell will be seen in cinemas and not just on the stage. He’s in two new dance films and a new independent film called Odious. He plays Hayward Jones III in the film High Strung, set for a January 2016 release, and Bryson Chase in Breaking Through, which will have its LA premiere on October 7. 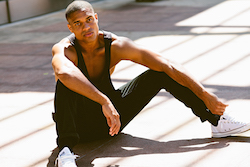 “High Strung is about a ballerina, a violinist and a hip hop crew, which is where I come in,” Mitchell explains. “They all come together and help each other through struggles. The musician, who is from Britain in the movie (and in real life), is struggling with securing his Visa. Then the ballerina, played by Keenan Kampa, is struggling with finding herself and getting past perfectionism. One quote that I really loved in the movie is from a dance teacher to Ruby, Keenan’s character. He says, more or less, ‘Don’t try to be perfect. It’s our imperfections that keep us going.’ And that is so true! I’m excited for more dancers, and non-dancers, to see this movie and to be inspired by it.”

When on set in Romania, Mitchell was able to work with other hip hop artists like Comfort Fedoke and Ian Eastwood. For him, it was especially meaningful to work with choreographer Dave Scott and dancer John Silver.

“I had to stop and take a moment to really appreciate how the dream that I’d had as a younger freestyle dancer had come true,” he says. “I was getting to work with both of these artists. I grew up watching Dave Scott’s You Got Served, which paved the way for so many African American male dancers. Plus, John Silver was a backup dancer for artists like Chris Brown, J Lo and lots of others. It was amazing.” 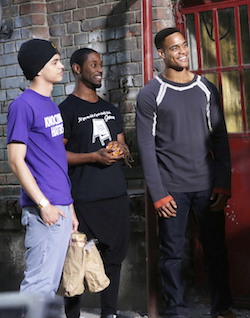 His favorite scene from High Strung is the tango scene. He says, “I’m not really sure why because there are so many great scenes and that one isn’t particularly better. But I think it’s just because that’s the first time you really see all the characters come together in the film. Not to mention the violin battle!” [He also hints that the subway dance battle is not to be missed.]

Breaking Through, directed and written by Step Up: All In writer John Swetnam and produced by John Legend, sees Mitchell in quite a different role. As he describes it, he’s “a jerk” in this film, a character who’s found professional success and is arrogant.

Then in Odious, his latest project, he plays an undercover detective, one of the lead characters. In the film, his character works with “a recovering alcoholic and drug addict whose kid has been kidnapped,” Mitchell explains. It was a meaningful movie for him, as it sheds light on tougher societal issues like child trafficking and racism. But it was also a fun project because it allowed him to work with Jackie Chan’s former fight coordinator on certain action scenes. This was another area where his dance background came in handy, as he is more aware of his body and how to hold it.

When asked what’s next on the horizon, Mitchell says he’d like to conquer Broadway. “Once my acting career is a little more established, I would love to go to Broadway and give that a shot!” he explains. Based on his good looks, one wonders if he might be interested in modeling. But unless it’s for a brand he’s really a fan of, he admits this wouldn’t be something he “dives headfirst into”. 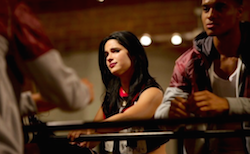 Marcus Emanuel Mitchell in ‘Breaking Through’ with Sophia Aguiar.

His advice for aspiring dancers trying to make it in the industry falls into five concise points: “1) Continue to dream. 2) Be ready at all times – you always want to be ready and not have to get ready when the opportunity arises. 3) Be fearless. You’re marketing yourself, so don’t hold back and be afraid of putting yourself out there. 4) On the other hand, don’t be arrogant. 5) Lastly, get in camps. What I mean by that is get into close-knit circles with choreographers and creative producers because it provides you more opportunities.”

To keep up with LA-based dancer and actor Marcus Emanuel Mitchell’s journey, follow him on Twitter at https://twitter.com/MarcusEMitchell.