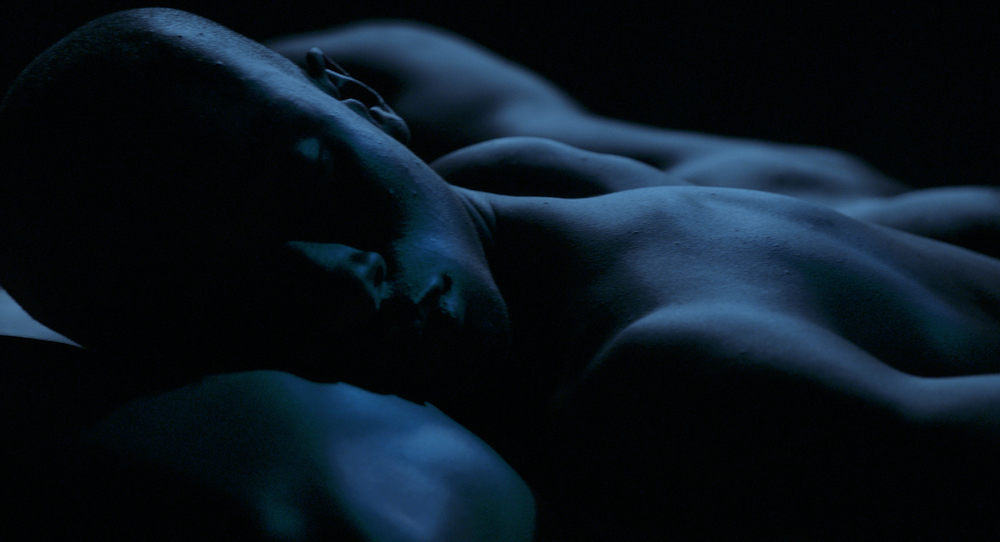 Salt Water does not just make you feel like you are underwater; you become one with the water. Against a black screen, we hear sounds of the deep ocean (which Abraham later told us were JT Bullitt’s seismographic recordings of the earth’s vibrations). Fleeting moments interrupt the darkness — bare arched backs piled on top of and next to one another, rising and falling in wave-like motions. The dancers’ backs are grayish-blue, like rocks or sand dunes at the bottom of the sea (a video of the ocean was actually projected off of a mirror and onto the dancers’ bodies). The spines ebb and flow just as organically and hypnotically as the tide. No moment on screen is longer than a few ephemeral seconds before blackness takes over and another image appears. Then we see tidal waves and riptides as dancers break from their intertwined huddle. One dancer reaches his arms over another’s head just as one wave would engulf the water below it. A second dancer expands her body, freeing herself from connection with the group like a wave crashing against a cliff. Dancers break free and reconnect, expand and collapse without any rhyme or reason, but with just as much majesty and mystery as the sea. Eventually, all the dancers return to the starting position: a seemingly never-ending view of beautiful backs ebbing and flowing like a calm tide on the shore.

“There was an organic energy between the crew and the dancers,” recalls Abraham, who saw himself more as a conductor orchestrating the scene when they began filming back in summer 2016. In the beginning of Salt Water, all the viewer can see are the dancers’ backs. Abraham explained to us how the dancers were hunched forward with their hands resting on a stool so that they can push off and roll against it. Other dancers were crouched below with one arm resting on the back of another. Each dancer was given a structure of three or four “go-to” movements (long body rolls, slow wiggles, rocks forward and back). Without any music or ocean sounds during the filming, Abraham would look through the camera and call out when and how he wanted each dancer to move. “You plan the structure,” he noted, “but let it live when you’re shooting.” This improvised form made the movement even more organic and ocean-like. “You don’t know from what direction the waves are coming or how strong they are,” he explained. “It can be both beautiful and devastating.” Because of their close proximity, dancers’ bodies would react naturally to the movement performed by another dancer farther away. Without being able to see Abraham or their peers, the dancers lost any sense of self-consciousness and learned to move, respond and live as one body.

I can’t say I have seen a great number of dance films, mainly because I believe (or rather, believed) that dance belongs live on stage. But Salt Water was truly mesmerizing and, although it might have been able to translate onto the stage, it would not have had the same impact. The cinematography has choreography of its own — wide shots, close shots, slow pans and quick flashes that instruct the audience exactly where to look and what to see. I did have moments of frustration where images seemed to go too quickly or I wanted to see a dancer’s full body expressing a moment of choreography. But I believe that not having full control over what I was watching and experiencing as an audience member paralleled the immensity, mystery and wonder of the ocean itself.