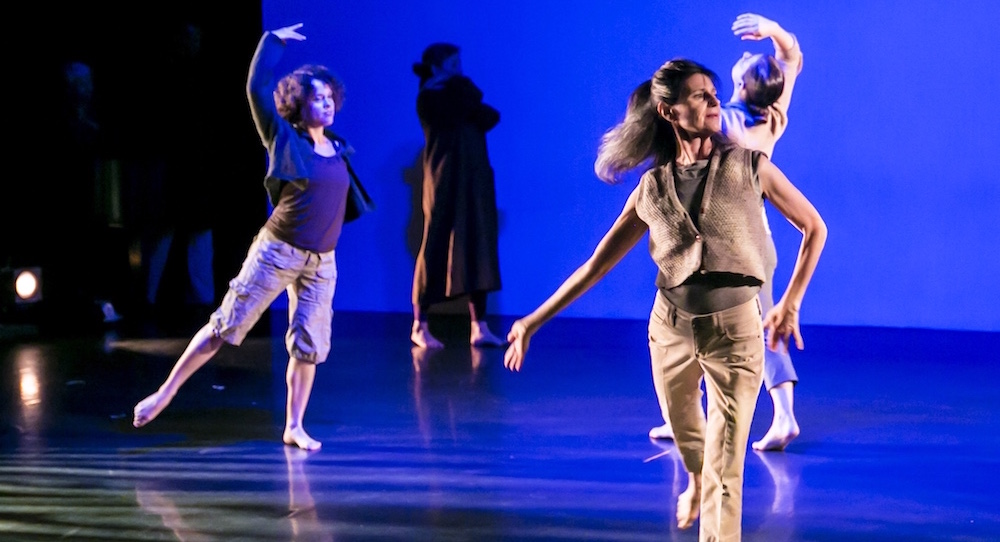 Long-standing conflicts between prominent groups of people are more than what we can count on one hand. Arguably, the most well-known and severe of these is the conflict between Israelis and Palestinians; helping to create a peaceful solution has eluded several American Presidents and lines of other world leaders. Dance is a medium wherein people of different identities can come together, and it doesn’t have to be about the socio-political conflict between them. Through their bodies, and a focus on artistry, they can come to better recognize each other’s common humanity. 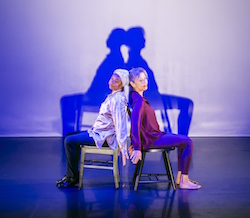 Emerge from Joanie Block and Dancers reached for this commendable goal, in regards to that sometimes seemingly intractable Israeli/Palestinian conflict. The result was a powerful experience illustrating that undeniable common humanity. Cultural and religious sensitivity was clear from the outset. For example, Block welcomed the audience and then noted that there would be chanting from both the Qur’an and the Talmud (the first five books of the Bible’s Old Testament). During this time, there would be no talking or anything else that might detract from the recitation of these sacred and ancient texts, Block affirmed. It occurred at the beginnings of both acts, and was a powerful statement of commonality – different words, but the same act.

The night featured several rich and complex works of many artistic media, beyond the scope of this review to fully convey. It will focus on the most striking, memorable, meaningful of many works that were all of those things. During that introduction, Block also affirmed that “tonight is about coming together” – a simple yet powerful statement with which to start the show.

In the first piece, “Setting Out”, Block, Emily Bloomenthal, and Melinda Rothstein offered movement in intriguing circular paths, and with an overall circular quality, with both grace and power. Arms circled in opposite directions to end with joined hands. Two dancers held each other’s wrists to give and take weight, to create a fluid undulation of their spines that took on its own circularity.

Other movement was identifiably Middle-Eastern, such as backbending with one toe popped and wrists circling above one’s chest. Circularity was the dominant feature through it all. This quality even arose from sequencing of movement sections in the piece – phrases were repeated and modified, then creating a cyclical circularity. Things often go in cycles in this life; “there’s nothing new under the sun,” they say. Diagonals appeared in spacing every so often, however.

These diagonals seemed to represent a breaking from the status-quo that the circularity might have represented. Diagonals move forward, rather than back to their origin (like circles). To end, two dancers walked off with their hands over their eyes, their vision gone. Another moved on a low level and ultimately lay flat on the ground. A hopelessness hung heavy over and around them. Yet the story wouldn’t end there; there was much tale still left to tell.

To end the act, “Dialogue” featured Bloomenthal and Soumaya MaRose in a duet full of spacial tension and big, brave movement. They seemed to be starving for all of the stage’s space, moving with incredible expansiveness. Although they did not have physical contact, the push-pull dynamics between them were palpable. MaRose moved with those belly dance-idiom signatures, evidently her accomplished craft. Bloomenthal moved in smoothly wave-like patterns, her spine rippling, hips rolling and torso dipping.

Toward the second half, they circled one another, then began body percussion. The connection of their mutual tensions in the face of the other permeated through to their very skin, fascia and musculature. Following that, each had a solo with softer movement. More connected within themselves, they could then dance together again to end the piece in a far more unified, far less tense quality. Was this ability within them all along? The piece seemed to imply that it was.

In the second act, MaRose had a memorable and striking solo, “Taksim”. It was a gorgeous illustration of proud, strong  femininity. She began with a hood but soon stripped to reveal a stunning blue dress (by Costume Designer Brooke Stanton), as well as released her long hair. She let it follow and flow with her whirling dervish-type spinning.

Given the theme of the overall performance, was this a woman daring to step outside the self-presentation that her religion dictates? Lights went down and came up a couple times (by designer Stephen Petrelli). The meaning of the lighting change wasn’t fully clear — perhaps a turning point or epiphany? Perhaps a challenge that she overcame, her remaining sure through darkness, until light returned? Regardless, it was spellbinding art to experience.

“Shalom/Salam” offered a sense of up and down, a weightedness and a lifting from it not yet seen in the performance. There was sincere joy in rising from that weight — refreshing to experience, given the more sustained heaviness (literal and metaphorical) of the rest of the performance. 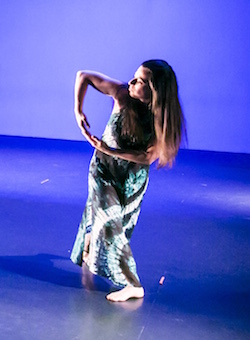 Movement of expansive circling, pushing and pulling, while live music even more fully immersed audience members in the experience. Green and earth-tone dresses moved beautifully with the dancers. It was all uplifting and somehow transcendent. No matter who the dancers were or where they came from, they could dance together. It was all quite powerful to experience.

Audience members became further immersed in this atmosphere when we begin to clap along with the live music. Then dancers invited us to come dance on stage. No matter faith or ethnicity, political ideology, or the like, all were moving together. This is what dance can create. And, perhaps in the process, cause some of the bricks in the walls that divide us to fall.

Also intriguing was how it was a full house, almost sold out, it looked like. That’s impressive, in this day and age in America, for dance companies apart from those we might consider “top-tier” (Alvin Ailey, Mark Morris, New York City Ballet, American Ballet Theatre). This is anecdotal rather than scientifically representative.

Yet it may demonstrate that people are looking to art to find a feeling of unity, and answers to difficult questions — those that can feel illusive. Whatever the case may be, dance like Emerge has the power to help quench some of these thirsts. In today’s world, we can find ourselves so thirsty for it.