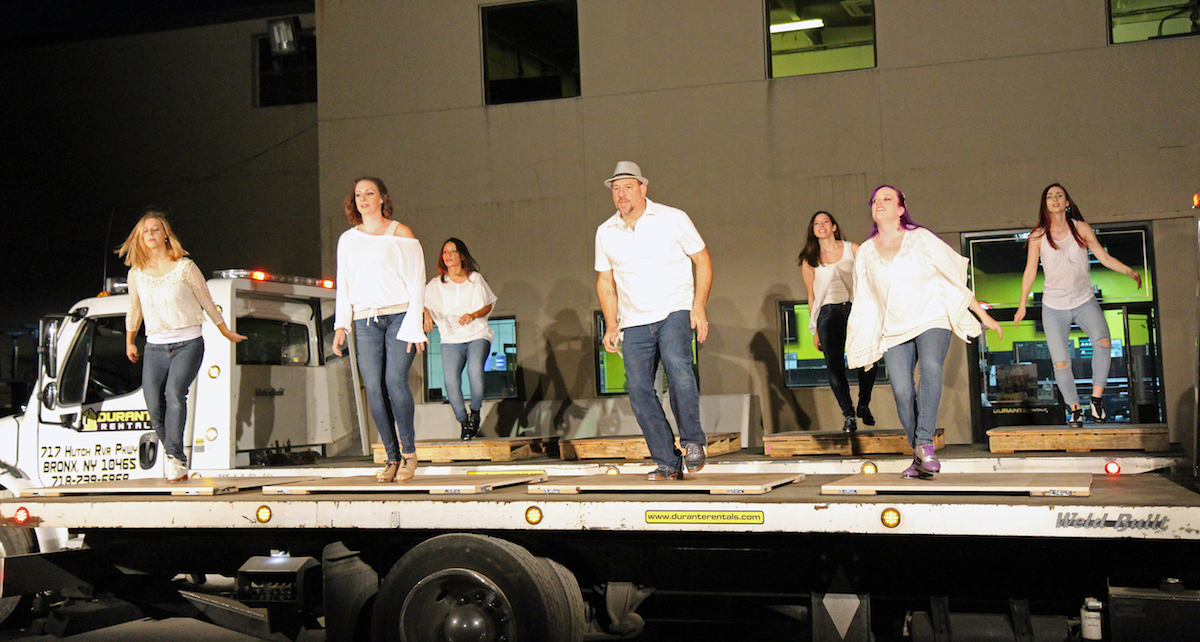 “Tap dance is still relevant if you use it to discuss relevant things” says Anthony Lo Cascio, former Tap Dog and current artistic director of his own tap dance company, #Taplife, based in New York City. In his latest collaboration for the music video “Eyes” from the album Salutations from Ozone Park by singer/songwriter Frank Persico, Lo Cascio was inspired by Edward Snowden, former USA Central Intelligence Agency (CIA) employee who leaked classified information about global surveillance programs and data collection run by the National Security Agency (NSA). Lo Cascio sees his tap company #Taplife, who is featured in the clip, as a vehicle to express a view on social commentary and not just present tap dance but present life through tap dancing. The music video starts with a quote by Snowden: “I don’t want to live in a world where there’s no privacy and therefore no room for intellectual exploration and creativity.” Lo Cascio shares that he believes it is always better to know and understand the reality we exist in rather than to ignore these realities. “One thing is for sure — Big Brother is watching,” he says. His thinking goes deeper when he shares his views on the purpose of art. “I think art has been under attack for a long time because the idea of art is to be subjective and to have an open mind and to look at it from as many different points of view as possible, and sometimes some points of view may make people uncomfortable.” He questions as an artist whether we are in a “true safe zone” when we’re exploring ideas with others.

In creating the video clip “Eyes”, there was a clear vision, and Lo Cascio credits his team and network of friends he has known for over 30 years for making it an enjoyable experience. “When you work with the right people, you don’t have to deal with a lot of challenges,” he says.

With singer Persico strumming a guitar perched on a rooftop and tap dancers on the back of trucks, there were plenty of opportunities for challenges. “I came up with this idea where I didn’t want it to be just the dancing on its own,” Lo Cascio recalls. “I liked the idea of Frank up in the eye on the roof because of (the lyrics), ‘Eyes up in the sky’. I liked the idea of us (tap dancers) on the trucks because I felt like it was powerful.”

Lo Cascio’s tap and personal memorabilia, including Tap Dogs references, a floor autographed by #Taplife company members and his first birthday card that was found after super storm Sandy also made it into the clip. When #Taplife is not filming clips, the company can be found working on its show, Sounds of a #Taplife. “Our real mission statement is Sounds of a #Taplife,” he says. “The show goes through the things that are on our mind. It is the personality of the company. A reflection of lessons learned and a connection of universal dots of life.”

According to Lo Cascio, #Taplife is ‘Morse Code for the Soul’. He explains, “Morse code are taps that make out words, so to me when I’m choreographing, the rhythm alone is the message, it’s the music that we make. We’re tap dancers, we’re musicians.” In approaching his choreography, he shares that it is a lifelong experience. “I wanted to be another instrument in the song. I don’t want to obstruct the art that is there already. I want to marry it. I want to create more awareness of what you are experiencing adding more positivity to the song.”

It’s this mission of positivity and spirituality that is natural, organic and good, which is a key part of the message of #Taplife. And what’s next for Lo Cascio? He likes to keep busy with many projects in development, including more music video clips, company auditions, tap camps, tap jams and shows, but there is one upcoming event that has Lo Cascio very excited, a collaboration with National Dance Week Foundation for National Tap Day.

“I shot a music video on Rockaway Beach, New York, called ‘Lucky to be Alive’,” Lo Cascio says of his first collaboration with Persico. “I put Frank in a music video and didn’t tell him. We’re turning the music video into a National Tap Dance Day event. We’re going to dance on Rockaway Beach boardwalk with the company on May 25, and we’re doing it globally live on Facebook. You can learn the choreography online for free. It brings the whole tap family/tap world together.”

This is just another way that Lo Cascio is embracing the power of social media in his projects, but this comes with some words of wisdom: “So if you own it and not let it own you, you can get a good message out there. We are using it to get our message out, and I think we have a good message”.

By Nicole Saleh of Dance Informa.