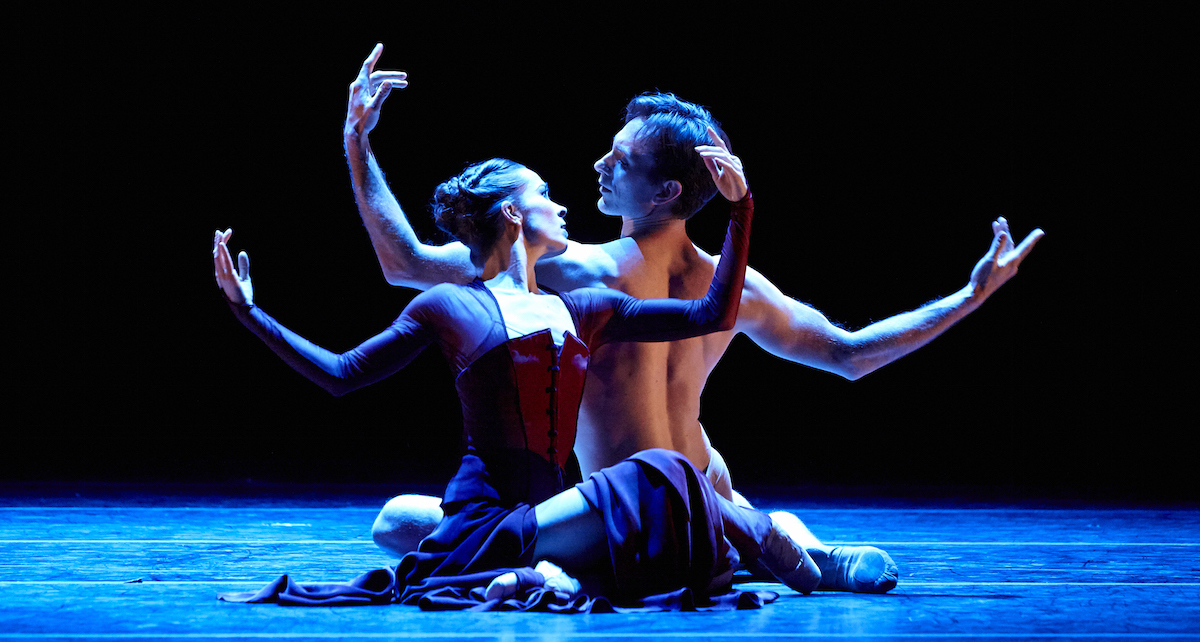 Atlanta Ballet’s stacked triple bill, Gennadi’s Choice, featured excerpts from Paquita, the world premiere of Gemma Bond’s Denouement, and the North American premiere of Liam Scarlett’s Verspertine. As the first curated program from Atlanta Ballet’s new Artistic Director Gennadi Nedvigin, the night of beautiful and powerful works was one to be celebrated.

In a pre-show talk, Nedvigin spoke of his excitement about his new role as Artistic Director, as he just recently retired from the role of principal dancer with the San Francisco Ballet. There was true joy in his voice when he spoke of the night’s opening performance and how the idea of the hard work of everyone involved coming to fruition was “very special” to him.

He spoke of the night’s selections, first mentioning the “crisp, bright, and exciting” tone Paquita brings to Atlanta Ballet’s repertoire. He then mentioned how Scarlett “brought a lot of energy to the company” in the rehearsal process and how he wanted to feature Scarlett’s brilliant mind through Verspertine. Lastly, Nedvigin spoke highly of Bond’s Denouement and how her piece was a wonderful chance for the company to “collaborate, grow, and experience this kind of work” from Bond.

The pre-show talk added a bit more adrenaline and energy to the seasoned crowd, and I anticipated the upcoming selections more than usual.

Paquita was first on the evening’s roster. The set and aesthetic had lovely hues of purple and gold with beautiful costumes and lighting. I thoroughly enjoyed the grand pas de deux dancers – seasoned company members Rachel Van Buskirk and Christian Clark, as well as fellow company member Miguel Angel Montoya. Their presence and confidence had me hooked from their first step on stage. Although there were some minor technical missteps from some of the corps, the Atlanta Ballet company dancers were close to perfect.

Stand-out moments from Paquita were Van Busker’s 32 fouettés and Clark’s high-soaring variation. There was nothing new to be seen during Paquita, but that was not the intention. It was clear that Nedvigin wanted to showcase a quintessential classical piece that displayed the dancers’ technique and stage presence. Job well done.

After a brief intermission, Bond’s Denouement wowed the audience (and me) with its intense score, featuring a live pianist and cellist on stage with the six dancers, and its well-thought-out and risky choreography. Denouement had me on the edge of my seat; I don’t think I even blinked for the first minute.

Denouement featured costumes from American Ballet Theatre Principal (and one of Bond’s good friends) James B. Whiteside. The costumes were flowing but also linear with panels cut into a skirt for the female dancers. I could tell that Whiteside and Bond had the same vision for this piece, and the costumes complimented the dance wonderfully.

With cyc panels upstage and exposed wings, the stage and piece had a pedestrian feel. I loved how the entrances and exits were upstage through the panels, and Bond took this as an opportunity to light dancers upstage standing still and waiting, almost observing the other artists as they danced downstage. The piece was full of captivating lifts and interactions among the dancers, and during his solo, I felt a deep emotional connection to brilliant dancer Jordan Leeper. 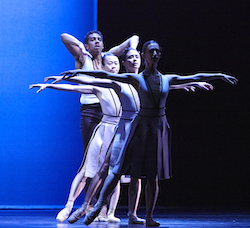 Denouement evoked the question, “What if?” What if I had made a different choice in that situation, what if I had married my first love, what if I could have saved that person from their heartache? Bond’s Denouement made me ask these questions. I saw the struggle toward the end of the piece when the dancers were out of sync and then in sync rather quickly with their movements, and trying to answer these questions themselves. I saw these questions in the flirty movement with one pas de deux, and the heartache in the next. I saw searching and longing and the almost frantic movement to brilliantly match the score. I was moved by Denouement and its humanity. Congratulations to all involved on this wonderfully executed world premiere.

The final piece of the evening was Scarlett’s North American premiere of Verspertine. Having previously been set on the Norwegian National Ballet, Scarlett’s Vespertine featured a Baroque-influenced score created by a chamber orchestra in Norway and gorgeous costumes designed by Scarlett himself.

As soon as the curtain opened on the setting for Vespertine, there was an audible gasp from the entire audience. Hanging from the ceiling were beautiful, custom chandeliers that covered the stage. Only the center chandelier was lit, so I knew this meant there would be brilliant lighting to coincide with the movement on stage, and I was right. The lighting and costuming alone were absolutely breathtaking. 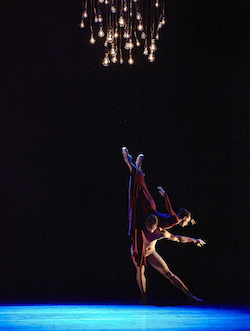 The word “vespertine” is a scientific term to indicate something of, relating to, or occurring in the evening. The title of the piece is fitting because I pictured an evening gathering in 17th century Italy that transitions from a lovely gala to a night of awakening for the attendees/dancers. The piece was subtly sexual, nuanced, evocative and captivating.

The highlights that captured my attention the most were the beautiful costumes that the dancers used in the choreography (think highly sophisticated skirt work), the pas de deux between male dancers Christian Clark and Jared Tan, female company member Aleesa Rogers, and the transition from pointe shoes and maroon corsets with billowy skirts to nude costumes and bare feet. The dancers became stripped down – emotionally and literally. There was this sense of homage to court dancing, and then a rebellion from it. I was taken aback by Verpertine and applaud everyone involved.

I appreciated and loved how different Denouement was to Paquita and to Vespertine. The evening was full of stunning master pieces of art, and I commend Nedvigin for showcasing such a diverse program.