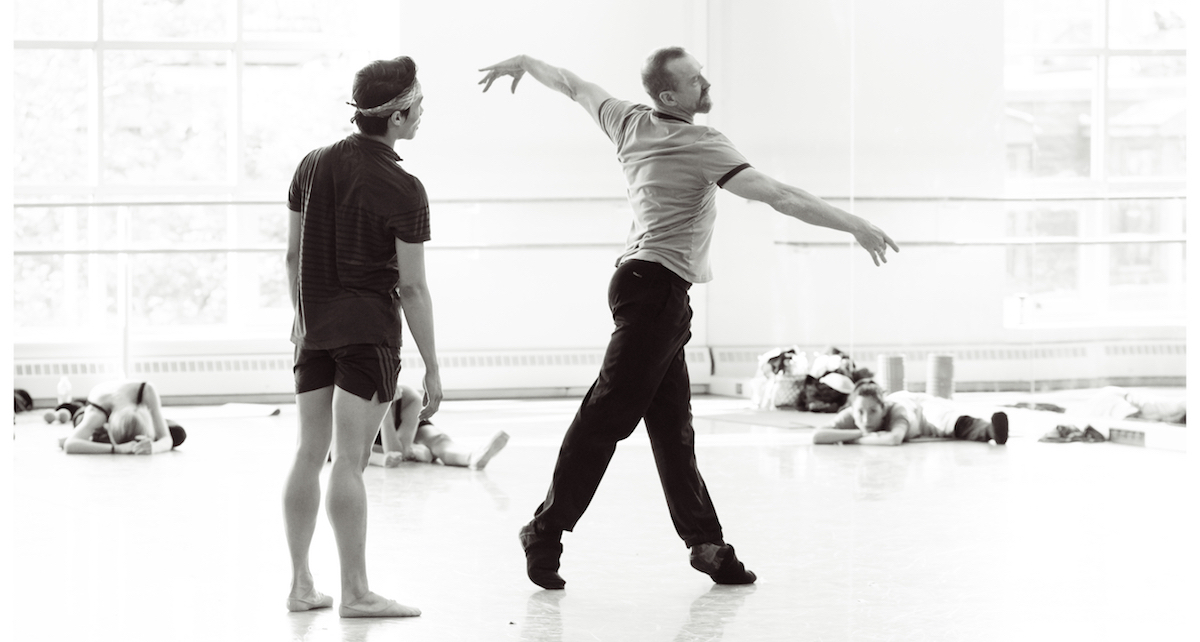 “What, really, is art?” seems to be a never-ending question, one that no one has been able to answer concisely and matter-of-factly. Perhaps that’s a good thing. But do we also ask what an artist is? What are their responsibilities and obligations? What can we expect to be within the bounds of their discovery, knowledge and interest? In the dance world, these questions relate to politics and hierarchies of dancers, choreographers and audience members.

William Forsythe pushes these questions forward, in how he creates works and how he engages with all involved through that process. 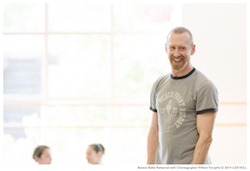 Dance Informa recently attended a preview and open rehearsal of the renowned choreographer’s Artifact at Boston Ballet (February 23-March 5, at the Boston Opera House). An audience filled bleachers in a studio at Boston Ballet’s headquarters.

Forsythe made clear his interests as a choreographer, as well as his ways of working fairly quickly. He demonstrated care for building up dancers as both vessels and creators of the art of dance. He explained, for instance, how prompting dancers to make as little noise as possible can make them stronger.

“I want to work with strong dancers, so that’s how we can help make that happen,” he explained. Rather than being a critical overlord, it seemed as if he wants to lead the dancers closer to their potential. Case in point, an audience member later asked him about his philosophical interests. He shared that he reads a good amount on process, things that “help me help dancers, because that’s what I do all day.”

He compared himself to a coach who helps dancers “solve the problem that their bodies are given” — namely, the choreography and accompanying performance elements. Along with this idea, at a few points, he would ask dancers how they would accomplish a certain technically difficult movement or phrase. He asked one dancer, “How would you get your hips from there to there?” in order to execute a challenging and fast turn, for example. This way of helping dancers solve that “problem” of difficult choreography is arguably a commonsense way of allowing them to find ways of executing choreography that truly work for them, and will stay with them. 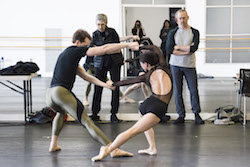 He also demonstrated interest in building up audience members of the general public to more fully understand and appreciate the intricacies of dance. He described how with more and more viewing and investigating dance performance, we audience members see more and more detail. He expressed that becoming an expert is a layering of those details into one’s understanding and memory. In a quieter and more private conversation after the show, he stated that dancemakers “have an obligation to [audience members]” because of what they invest in coming to shows.

They therefore rightfully place a certain trust in those who’ve brought to life what they are about to see, he asserted. Thus, all in all, the reasoning for the occasional teaching tidbits that Forsythe would offer during the open rehearsal. He broke down a phrase with devant ronde de jambes en l’air growing larger with each rotation, for instance. “It’s not to condescend audience members or to say we’re better,” he explained, “but to help them better appreciate what we’re offering.” This came off as fully genuine when paired with his earlier assertion to his audience that he’s interested in us having our own answers about his work, rather than adopting his.

He also discussed how Artifact has been in process for 32 years. The work that premiered in 1984 was created in a three-week rehearsal period, out of logistical necessity. Since then, “every single piece of the work has been worked and reworked,” Forsythe stated. “[Because] my skillsets have changed, dancers have changed – their skillsets, the ways they work and more.” He acknowledged how the world has also changed and described how that does come into the rehearsal room. He explained how he and his dancers do discuss current events. Ever the self-described “coach”, he stated, “I work with many young people, and I want to model a certain decency and kindness for them.”

Forsythe seems to walk the walk with this sentiment. Discussing the sense of wonder and discovery in the program for the showing, for instance, he shared that he’d “be so very pleased to welcome you into my world.” Forsythe understands that dance-making is a true team effort, and his role in that effort is to inspire and uplift. Those efforts can spill out from dancers and into the hearts and minds of audience members. We may never truly define what art is. We can, however, generally agree that a true artist connects us, unifies us and helps us step into better versions of ourselves. Forsythe, now rehearsing his Artifact with Boston Ballet, is one such artist. May we gather and hold what he has to offer each one of us.