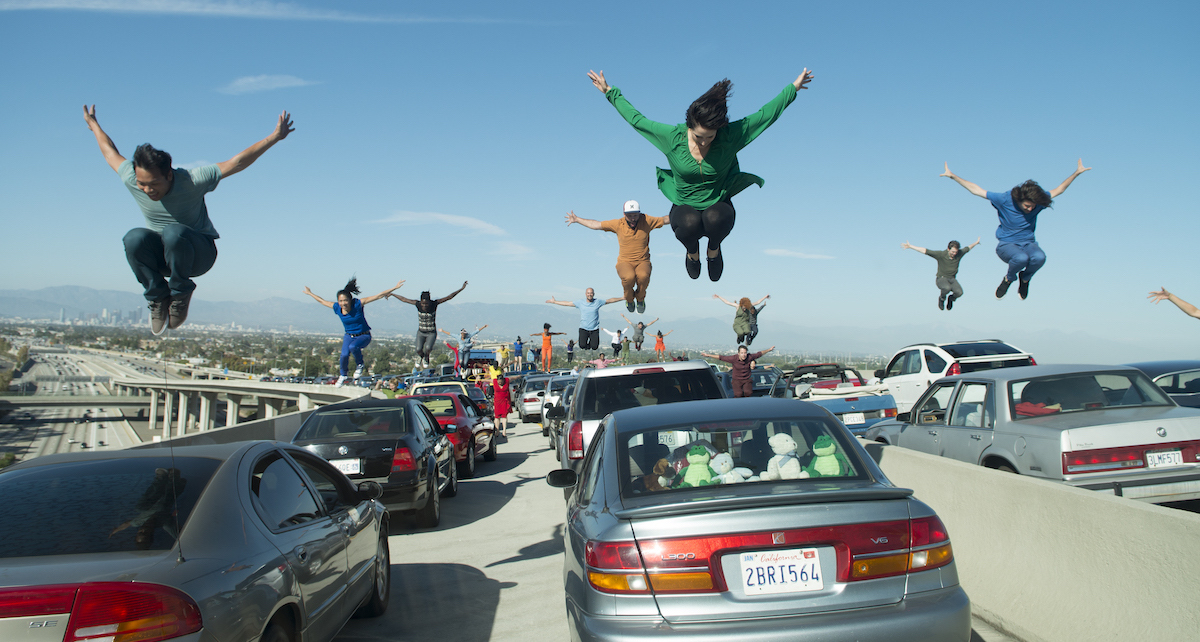 The tradition of classic film dance — of Fred and Ginger, of Gene Kelly and Cyd Charisse — can seem like something of the past. It can feel like the dance of today’s Hollywood is hip-hop and contemporary that overemphasizes flash and trickery, while undervaluing technique and true artistry.

Every so often, however, Hollywood offers a film that resurrects classic film dance – wherein less can be more, and smooth beats sexy. La La Land is one such film. Nominated for 14 Oscars, here we share five special moments of song and dance from La La Land, in the lead up to this Sunday’s awards. 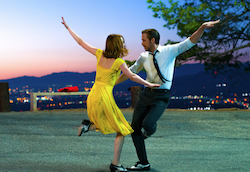 As pictured at the top of this article, the movie opens on a stereotypical L.A. highway traffic jam. One woman in a vibrant yellow dress breaks the mold. She decides to get out of her car and dance, rather than sit idle in the traffic. It seems to represent a larger leaving behind of frustration with difficult realities, and in so doing blazing one’s own trail.

Dancing amidst, and on top of, stand-still cars on a highway is a fresh new approach. It’s one that helps the film open with a bang. The Mandy Moore choreography is classic Jerome Robbins style jazz with modern hip-hop touches, and the dancing is crisp and clean. The scene sets high expectations and standards for the rest of the film’s dancing.

Mia (Emma Stone), an aspiring L.A. actress, has just had a hard day; another audition didn’t go well. Her three female roommates don’t let her stay home and sulk, however. Through clever and fun choreography, well-executed by the four ladies, they get her to dress up, doll-up and strut down the street to a pool party.

Two of them push Mia along toward the door, one hand on her back and the other grazing the hallway wall with a wide jazz hand, walking in deep and strong plié. The third roommate battements à la seconde on the top edge of their couch. Soon they’re walking – daresay, strutting – to the party, oozing confidence and flair. They swish their skirts side-to-side, reminiscent of West Side Story‘s “America” in impressive unison, ready to make their entrances.

#3. First steps toward falling in love.

Mia and Sebastian (Ryan Gosling), a musician whom she keeps running into, are walking to their cars together after the party. He helped her escape a self-centered chatterer (mainly because she tricked him into it), and an uneasy romantic tension is growing between them. The first notes of music play, and they look out on a gorgeous view – an authentic “I feel a dance coming on…” moment. They dodge each other in space with smart choreography, such as shifting around a bench and tapping feet in parallel away from the other’s. 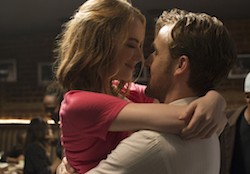 That parallel feeling continues as they move side by side, for the most part not facing each other until the dance’s end. Their unison is nearly impeccable. Their feelings for the other are confusing and complex, but they’re together in that. Sebastian hops a little as he walks to his car, and Mia twirls while walking to work the next day. They might not yet fully understand exactly how or why, but love is in the air between them.

Mia and Sebastian are at a movie together, and the projector breaks. She whispers in his ear, “I have an idea.” They go to a place that was in the movie, seemingly an astronomical observatory. There’s a circular structure allowing one to look down on floors below it. While she looks down, he taps her on the shoulder, and they begin to waltz. In an imaginative twist, they’re soon floating up to rest on billowy clouds of stardust.

They waltz in the stars, the visuals simply captivating. Their movement quality is effortless and floating, as if they truly were dancing in zero gravity. They then gently settle back into the seats of the observatory, the cosmological quality of light surrounding them dimming away. They kiss, a third attempt that’s the charm. Some things can only come together through dancing.

Things are getting more serious between Mia and Sebastian. He’s playing piano while she’s dancing with joy and abandon. She wows the crowd with her moves, jazz choreography that’s casual and her own enough to not feel overly technical. These include a Fosse-esque forced-arch and layout, and a fluid take on the inwardly-rotated (heels out) flappers’ Charlestown.

Mia dances here not only with her body but also with her soul. People who do that, be they technically-trained professionals or not, are the ones who captivate us with their movement.

As she does so, Sebastian looks on her with genuine admiration. For a moment, they lovingly lock eyes. The couple shares another tender moment when his set ends and he jumps off the stage and right into her arms. Their connection is more than physical, but the physical is powerful.

Some things we find only in and through our body. La la Land, through these and other commendably-crafted dance scenes, makes that truthfully clear. Congratulations to choreographer Mandy Moore, Ryan Gosling, Emma Stone and the entire cast.