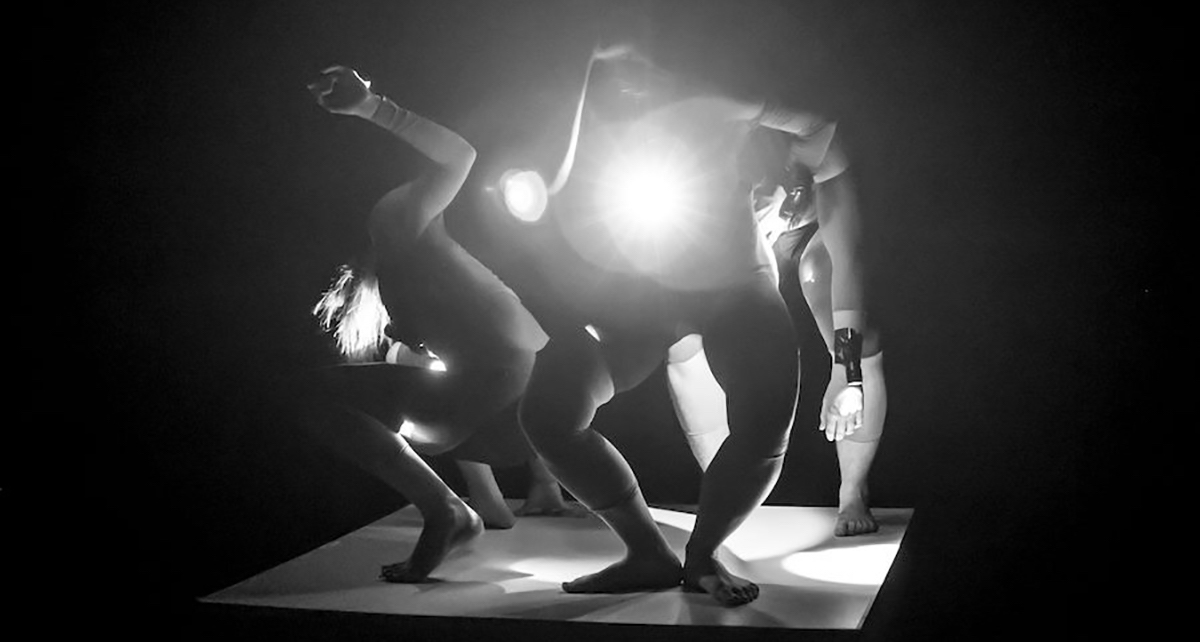 Something that’s truly beautiful about the art of dance is that it doesn’t have to be one thing. The possibilities of style, number of dancers, production elements, concept and so on are infinite. Yet, setting certain constraints, and calling on artists to contribute work that abides by those constraints, can stimulate dialogue – simply by the similarities and differences of what separate dancemakers create when given those bounds. The Dance Complex’s Tiny and Short brought together these offerings from different dancemakers in a thought-provoking, and also just plain fun, night of dance.

A first act of 10 dances all took place on a four-by-four foot stage – thus “tiny” dances. This concept was adapted from choreographer Mike Barber, whom The Dance Complex thus credited in the program. The second act took place in the Dance Complex’s performance space that  doubles as a studio and offered a group of shorter individual pieces. It seemed as if all of these pieces had potential to be developed into longer works of their own standing – thus, by comparison, “short” dances. 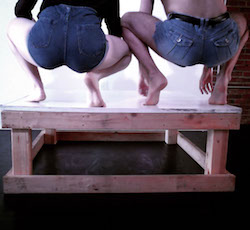 Rather than something highly elevated over the average viewer’s understanding, evidently the aim was to present something that anyone can enjoy. Peter DiMuro, executive director of The Dance Complex, said that with this show, “we want to present dances like you could do in your kitchen. Do you dance in your kitchen? I know I do!” He also shared a belief that dance isn’t something high above the average person, and that a performance space doesn’t have to be so sacrosanct. “Go get a drink at the bar!” he playfully urged.

The first “tiny” dance was a tap piece entitled Pancake, choreographed by Shaina Schwartz and danced by herself and Sarah Paul Migliozzi. It could be perceived as a couple of housewives deciding to have a little fun, to get a little rowdy, while preparing pancakes for the family on any old weekend morning. They wore dresses but vibrantly colored ones. Their hair was tied back but in fun styles. Their sounds were clean and proud, offering intriguing syncopations of the music. They kept finding new spacial relationships with one another – both toward the back, to one side, or facing the audience, or facing in different directions. This added to the sense of new possibilities, those very present even on a four-by-four stage.

Just Breathe began with the choreographer Heather Brown explaining that the score was a recording of breath, and asking the audience members to close their eyes on the exhale and open them on the inhale. This was an intriguing way of shaping audience visual perception of a dance piece, like a film editor cutting and splicing different scenes together. At certain points, the change from inhale to exhale happened rather quickly, which could have made it difficult for some audience members to follow the effect – and therein potentially undercut that effect. Nevertheless, the framework fostered curiosity in that moment of opening one’s eyes, looking on the solo dancer (Christine Chen) in new positioning, and thinking, “Hmm, I wonder how she got there?” Such intrigue has the potential to open up meaningful questions about dance-making, as well as the relationship of dancer and audience.

Locker Room Talk presented a group of three dancers (choreographer Kristin Wagner, I.J. Chan and Sarah Thorne) with flashlights held in various parts of their skin-colored unitards. A voiceover score included Stephen Hawking and a man talking about different ways women must act and be in order to be “sexy”. Shockingly, the man said – without any pause or, seemingly, shame – that “if you’re complaining that you ‘wish men could see me for what’s on the inside’, you’re wasting your time”. The dancers moved as if puppets controlled by an outside force, yet those who are coming to life and desiring autonomy. But the outside force kept overcoming them. To end the piece, the dancers halfway stripped down to reveal black sports bras, and looked out at the audience with strong gazes. They seemed to call for help in the here-and-now, yet also challenge us to be part of the longer-term change that would free them.

The second act offered similarly intriguing variety. Alexandra Nunweiler in Sorry I Missed Your Call (as both dancer and choreographer) made a powerful statement about the cacophony of communication that surrounds us in daily life. A voice-over score of messages from doctors’ offices, family members and friends surrounded her in space as she began to move – closer to, and at other times farther away from, her phone. She picked up to say, “Hello?”, to have only silence on the other end – missed messages, failed communication. With strength and grace, she danced different versions of the same phrase through different phases of this contentious time with her phone, with effective alterations such as syncopations of the main rhythm. That cycle of missed communication continued. 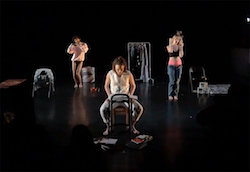 Ultimately, she was entirely wrapped in the phone cords and headpieces but still danced her main phrase, although with much less freedom. This made a clear statement about how that cacophony can confine us. She managed to move it down her leg and shake it off. We can move beyond that confinement, that action seemed to say. Yet, to end the piece, she again picked up the phone and said, “Hello?”, with no response. The cycle continued.

Other notable pieces in this section included Margot Parsons’s Overlay, a ballet piece with a joyous quality and use of space; and an ending piece, Who ARE we?” Where ARE we?, in which dancer/choreographer Betsy Miller made powerful statements about our current political climate through movement, humor and other spoken word elements.

Tiny and Short at The Dance Complex offered many more pieces worthy of mention and investigation, more than one review can do justice in discussing. The show reinforced the truth that stellar dancers and choreographers do live and work outside of the dance meccas of New York and Los Angeles, and that within certain confined frameworks, many possibilities are ripe for the finding. We can dance together, and we can dance alone in our living rooms. We can dance in small spaces, and in large, for longer and shorter periods. For ourselves, for those we love, and for our world, let’s dance it all.