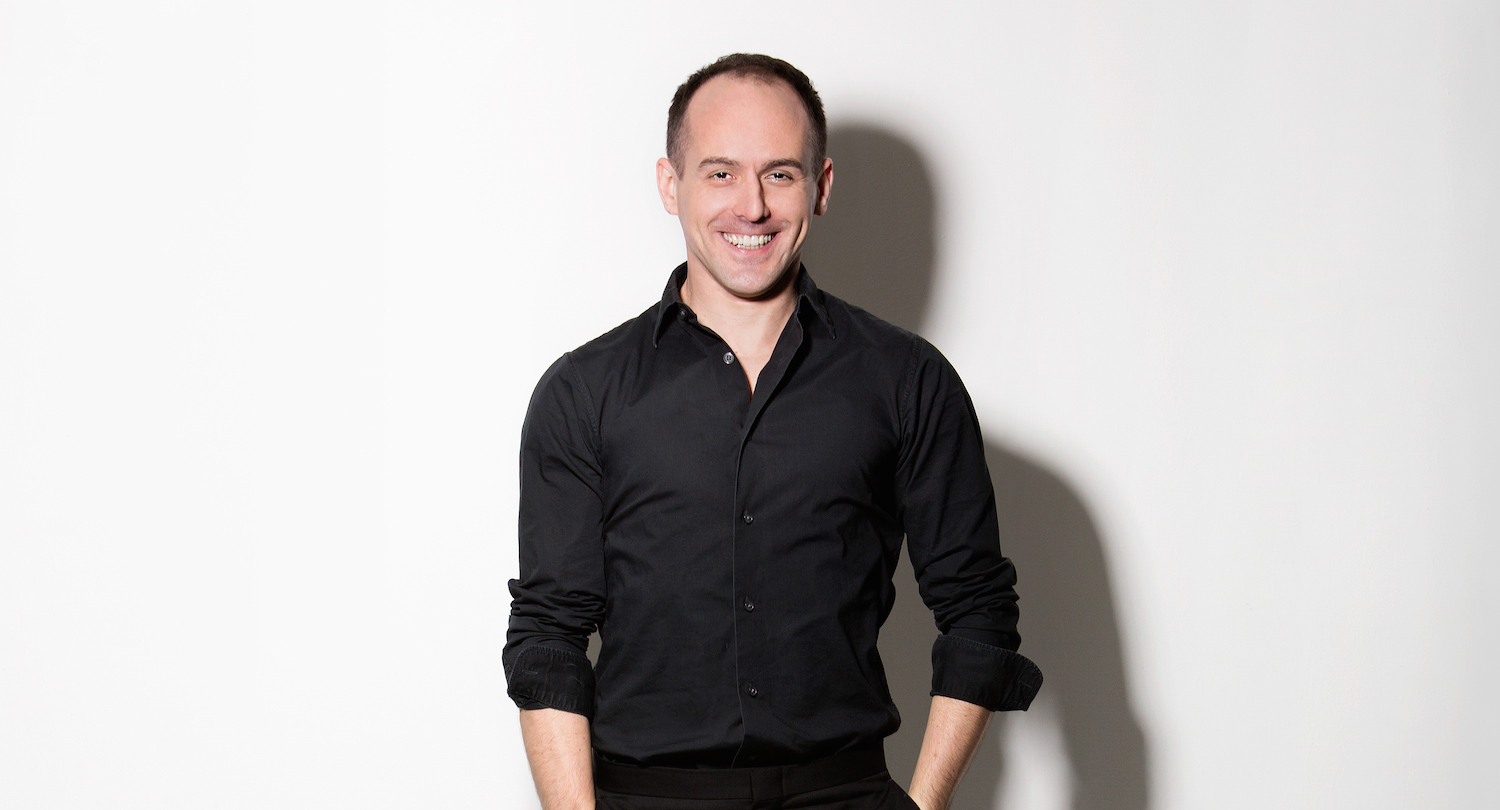 Choreographer Brian Brooks, the director of his own New York City-based dance company that tours nationally and internationally, was named the inaugural Choreographer in Residence at Chicago’s Harris Theater for Music and Dance in late March. Brooks — who has previously received a Guggenheim Fellowship, a NY City Center Fellowship, the Jerome Robbins New Essential Works grant and the Joyce Theater’s Artist Residency — begins this innovative fellowship with the promise of $600,000 over three years to fund new commissions.

The first handful of commissions will be for Hubbard Street Dance Chicago’s 2016-17 Season, Miami City Ballet’s 2017-18 Season and Brooks’ own company for the 2017-18 season. Each piece will either premiere at the Harris Theater or will be presented by the Harris Theater after its premiere in another city.

Speaking with Dance Informa in May while on the way to rehearsal, Brooks said the Choreographer in Residence Fellowship was such an honor.

“I’m over the moon about it,” Brooks shared. “I wouldn’t at all say that I’ve completely settled into it already. I’m still pinching myself! I’m elated!” 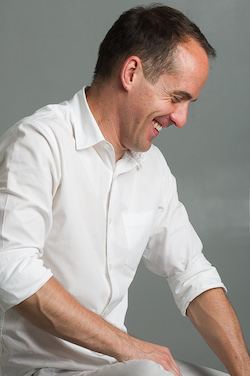 With arts funding hard to come by, the fellowship is a rare and extremely prestigious opportunity. It’s made possible by donors Jay Franke and David Herro. When the residency was announced, Franke stated, “The fund is an opportunity for the Harris to ‘invest’ in choreographers and cultivate a relationship with their work for our audiences. It will allow choreographers a chance to dig deep into their work while the Harris provides the venue and opportunity along with a long-term commitment to ideas they wish to explore. I see this fund as a catalyst for a choreographer to hone their craft further while allowing them the freedom to not stress about paying the bills.”

Shortly after the news broke, Brooks said he received overwhelming support. “I received literally thousands of messages from people that I’ve known and worked with in different cities,” he recalled.

One of the reasons Brooks is thrilled to partake in his “visionary and innovative” residency is because it supports such a broad spectrum of artists, from dancers and companies to their artistic collaborators.

“This residency is not just an award for me,” Brooks said. “It’s supporting a cross-section of dance and ensuring the creation and sustainability of dance in the U.S. It’s such an honor to be a part of it.”

When asked if the residency will require him to relocate to Chicago from NYC, Brooks said no, that it gives him freedom to stay in the Big Apple and to travel to Chicago and other cities as needed when setting work. He’s thrilled to have his choreography showcased to new audiences via the commissioned collaborations.

His new work with Hubbard Street will be the first to premiere in November. Rehearsals start this summer, and Brooks shared that he had already been “brainstorming for several months” and is “entrenched in process”. Hubbard Street, under the artistic leadership of Glenn Edgerton, will be celebrating its 39th season.

“I’ve known that company and those dancers for years, and it was something that was kind of in conversation,” Brooks said. “The fact that this commission would happen through the Harris Theater is extra exciting because it’s something we wanted to do, and the way that it’s all coming together is mutually exciting and supportive for me, for Hubbard Street and for the Harris.”

He added, “I’m planning on working with a large group from the company, so I definitely want to jump in. My plan is to have some wiggle room in my creative development with them so that I can get to know them and their tendencies, energies and strengths. My hope is to design a piece that’s really comfortable for them.”

Meanwhile, Brooks is incredibly busy this month. Brian Brooks Moving Company premieres his new full-length production Wilderness on June 9-11 in NYC and then tours to the American Dance Festival in Durham, North Carolina, on June 28-30. In the midst of that, he’s preparing the new show Some of a Thousand Words with former New York City Ballet Principal Wendy Whelan for its world premiere on June 23 and 24 at Festival of Arts and Ideas in New Haven, Connecticut. In late July, Some of a Thousand Words is also being presented at Jacob’s Pillow Dance Festival in western Massachusetts.

Wilderness, which is commissioned by the American Dance Institute, is being presented at The Kitchen. It’s the first new work of Brooks to be premiered since the major Harris Theater residency was announced, and it has reportedly required about 400 hours of in-studio time and another 400 hours collaborating with the design team and musicians. Featuring a brand new score composed by Jerome Begin, Wilderness is a 70-minute work using eight dancers and four drummers from Sandbox Percussion.

“Sandbox Percussion performs live on drums for an hour and 10 minutes standing up on stage, and it is as impressive as one would hope,” Brooks shared. “The virtuosity of the drummers and the maddeningly complicated, intricate score that they play is just really an event.”

In the final days leading up to the NYC premiere, Brooks said he and the company are fine-tuning or “fixing hemlines” right now.

“I’m very excited to launch this new piece, as I’ve taken a lot of risks,” Brooks explained. “I feel like I’ve re-found myself and my voice as an artist.”

While he admitted that there is more pressure to please since he’s been cast further into the limelight and given elite choreographic positions, he also acknowledged that this is his time to really not hold back.

“I’m nervous about the residency,” he shared. “It’s visibility, and it has an abundance of resources and opportunity of talent. The dancers that I now have the privilege of working with are astounding. It’s all very intimidating on one hand. But venturing into this piece, my dancers reminded me, ‘Now’s the time!’ So I’ve been thinking about what are we doing, what are we saying as a group, and what are we really pushing for ourselves and for the form. Where are we taking risks? Where are we really being true to ourselves?” 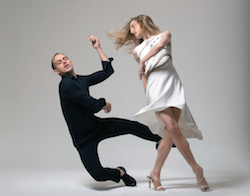 Wilderness, promoted as “alternately combative and intimate”, promises both moments of restraint and fluidity – perhaps reflecting Brooks’ own thoughts as he navigates his new opportunities in life.

Wilderness represents the first time Brooks has used live music in his company work. “Being the first time I’ve used drums, I think it’s helped to extract elements of my work that are rhythmic, aggressive and sharp,” Brooks expounded. He added that audiences can expect “integrated partnering and complex timing”.

In his work with Whelan, Brooks has also been pounding the pavement. The Some of A Thousand Words project is an expansion and evolvement of their 15-minute duet for Whelan’s Restless Creature program, which toured the county after being premiered in 2012.

Brooks explained, “What we’re doing this summer is adding several other duets and solos to the original work so that it will be a full hour performance performed by the two of us. The music will be performed live by string quartet Brooklyn Rider, who played our last piece live when we premiered that at the Vail International Dance Festival in 2012.”

Like with Wilderness, Joe Lavasseur will design lights and Karen Young will create costumes for Some of A Thousand Words, which Brooks said is developing quickly.

“We’re in the studio most days, and it’s moving very rapidly,” Brooks said. “I’m creating very long complicated slices every day, pretty much nonstop. So we’re just adding and adding and adding right now. It’s a dense creative time. It’s one that requires a lot of memory, a lot of water and a lot of kombucha. It’s also required a lot of massage, a lot of physical therapy, a lot of ballet, visits to the gym and the barre, plus some Advil.”

Throughout all of this, Brooks has been reflecting on his own voice as a choreographer. When asked how it was changing, he said, “My voice is getting louder! I’m shouting! But I’m also learning how to whisper. My artistic voice is expanding in both directions.”

Specifically with Wilderness, he said he felt “more texture and tone”, adding, “I feel more dimension, and not just in movement, but in the rhythm and the foreground and background of the composition. I sense I have more physical and aesthetic depths open to me in Wilderness. I think I also have a better conceptual and contextual depth that I haven’t had, plus emotional depth that I haven’t known before.”

In this new stage, Brooks is leaning into his instincts and is focusing on his “intuitive, most expressive ideas and impulses.” He’s asking questions like, “How can I make something I’ve never seen before?”

For further information on Brian Brooks, his company and his premieres, visit http://brianbrooks.us.