Like many little, budding ballerinas, Skylar Brandt grew up watching ballet and knew at a young age that that’s what she wanted to do. But going even a step further, it was in Brandt’s backyard, her “playground” of New York, that she found exactly where she wanted to pursue those ballerina dreams.

A New York native, Brandt says she was fortunate to be exposed to so much culture – the ballet, the philharmonic – as a young girl. She recalls seeing American Ballet Theatre (ABT) and immediately falling in love with the art form and the fantasy world of ballet.

“It was because of ABT that I really fell in love with the ballet,” Brandt explains. “I always wanted to be in ABT. I saw Julie Kent perform, and I said, ‘Oh, well that looks easy. I can do that.’ But obviously it wasn’t easy at all, but she made it look so effortless, which is of course part of the job. But once I started working at it, I fell in love with the challenge of the art form and how it is just so hard to achieve ‘perfection’.”

Perhaps Brandt’s parents were a bit taken aback that their eight-year-old daughter already had her life planned out, but there was no stopping the young dancer. 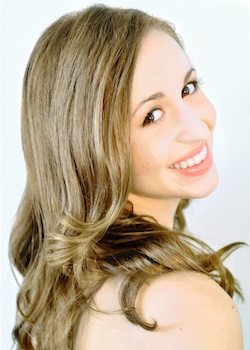 Skylar Brandt was promoted to ABT soloist in August 2015. Photo by Taylor Brandt.

“It’s more typical that people don’t even know what they want to do when they get out of college,” Brandt says, “so when you hear a little kid say, ‘Oh yeah, I’m going to make all these sacrifices and study and train like crazy to become a ballet dancer’, we thought, ‘Well, is that possible?’ And my ballet teacher said, ‘Yes! If you put your mind to it and stick with it, with lots of talent, you could possibly make it.’ So I’m very thankful that they believed in me enough to pursue it in that way.”

Her training began at Scarsdale Ballet Studio, after which she attended the Jacqueline Kennedy Onassis School at ABT from 2005-9 and also spent summers at ABT’s New York Summer Intensive. In 2009, Brandt joined ABT II (now the ABT Studio Company) and went on to become an apprentice with the main company in 2010. She continued her rise to the top, joining the corps de ballet in 2011 and, most recently, she was promoted to soloist in August 2015.

Brandt has performed and excelled in a wide range of works – classical, neoclassical and contemporary. For her, some favorite roles and ballets include the Bomb Squad in Twyla Tharp’s In the Upper Room; Antony Tudor’s Pillar of Fire, in which she portrayed the Youngest Sister, a character equally sweet and conniving; and Alexei Ratmansky’s Piano Concerto #1, in which she danced her first-ever principal role.

“I was dancing alongside Gillian [Murphy],” Brandt says of her experience dancing Piano Concerto #1, “and I had grown up looking up to her, and it was just wild to be sharing the stage with her in that capacity. It was sort of my real taste of leading and having to hold an entire ballet and be a main focus of it. That was a wonderful taste of what I had always dreamed about having.”

During this past ABT fall season at the David H. Koch Theater in NYC, Brandt again performed Piano Concerto #1, as well as The Green Table by Kurt Jooss, Tharp’s The Brahms-Haydn Variations, Paul Taylor’s Company B, and two premieres: Mark Morris’ After You and Marcelo Gomes’ AfterEffect.

For Nutcracker season, Brandt and the rest of ABT will head to Costa Mesa, California, where they will perform Ratmansky’s The Nutcracker at the Segerstrom Center for the Arts. Brandt will dance the Chinese Dance and Nutcracker’s Sisters (ABT’s version of Marzipan).

As a dancer, Brandt says she loves that she is able to live and dance to such wonderful music, and share her passion with an audience. 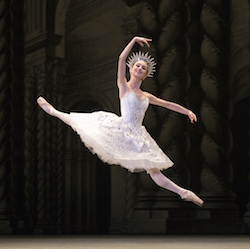 Skylar Brandt as the Diamond Fairy in ‘The Sleeping Beauty’. Photo by Rosalie O’Connor.

“It’s very rewarding and enjoyable to think that you can make someone’s day better or give them something beautiful or something to hold on to, even if it’s a fleeting moment,” she says.

And as far as technique, the steps that come perhaps the most naturally to Brandt are turns and jumps, she says.

“I really enjoy turning and jumping,” she adds. “I actually used to be so weak jumping, and then I remember being in school and one day I just looked at the boy behind me in class, and I thought, ‘I’m going to try to jump as high as he’s jumping.’ So all of a sudden, I started really pushing myself, and it sort of changed over night, which is a weird thing.”

And the movements that are “less natural”?

“I think it’s adagio-type things, like anything where I have to lift my leg is more difficult because I’m not the most flexible person, I would say,” Brandt admits. “So when you have to move slowly and show your lines, it’s a little bit more of a challenge for me.”

Now that Brandt is a soloist, the work is certainly not over. She says she will continue to work on her technique, artistry and port de bras.

“I definitely want to continue to find different levels of my dancing,” she adds. “And continue to improve myself as an artist. That will certainly be a focus of mine.”

Brandt seems to be loving her journey at ABT, and her story proves that dreams, even those from such a young age, can come true. She also loves the people who make up her company, and says that there is a feeling of family, a friendly camaraderie, between all these dancers who have come from all over the world to dance on the same stage.

“I’m so fortunate that my family is here in New York and I got to stay close to home,” Brandt reflects. “I really feel for my friends who are here from other countries. My family loves to be the ‘adoptive parents’ and be parents to everyone, especially the people who don’t have a family here. ABT is really special in that everybody is really wonderful there. There’s not one person who I don’t get along with or don’t love. It makes it like a family for all of us. We all really respect each other, so it’s a great dynamic.”

For those in the California area, check out Brandt and the rest of ABT perform The Nutcracker at the Segerstrom Center for the Arts, December 10-20.