Lauren Adams is one of those people with whom you want to talk about art for hours on end, if you have the time. Her mind is always turning about choreography, music, costumes and movement. Currently touring with 24/7 Dance Convention, Adams is one of the most sought-after choreographers today.

She recently created a music video-type dance film for DanceOn Network to James Bay’s song, “Let it Go”, using two ballroom dancers. The beautiful dance video already has over 50,000 hits on YouTube. Here, Dance Informa catches up with Adams about the filming process, working with ballroom dancers and her take on dance on film. 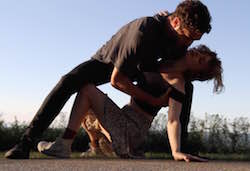 When did you start choreographing?

“Way too young, to be honest. Probably for fun, around seven, and then for people actually asking me to choreograph pieces, like 12-13. My teacher threw us in and had us teach. I got experience in a safe environment at a young age.”

Where did you grow up dancing?

“I grew up dancing in Michigan at Shelley’s Spotlight. And now my best friend owns [the studio], and it’s called Spotlight Danceworks.”

Explain the DanceOn Network and why you wanted to be involved.

“DanceOn is a social network that brings more attention and publicity to different artists…recording artists and choreographers.

The director of [DanceOn] came and watched one of my classes at Steps on Broadway when I was teaching there regularly. Every now and again, they’ll reach out and ask if I’m interested in creating an original work to a song. [DanceOn] does music campaigns, and the one I was a part of was for James Bay — the song ‘Let it Go’. There were a handful of choreographers who were selected by his team, and I was one of them.

Unfortunately, my video wasn’t ready by the deadline because my dancers were out of the country, but I decided that I would make it anyway. They wanted something contemporary, and I didn’t do that. I kind of broke the mold on that.” 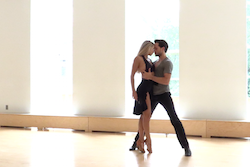 Why did you decide to choreograph a ballroom piece, instead of your usual contemporary work?

“I had an interesting approach, only because ballroom is such a specific culture. I started studying Latin dance a few years ago. I actually just competed at World Championship, in the ProAm division, and we won, so I have a World Championship title, which is just the weirdest thing in the entire world. But I’m nowhere near the level of the dancers I used in my video!

The thing about the ballroom culture is it’s so over the top. I had a spray tan, and my ballroom costume cost more money than my wedding dress. The whole thing — the long nails, everything — is so showy. But my favorite way to watch ballroom dance is in the studio in their practice wear. And nobody ever gets to see that. It was so much more honest and natural. All the glitz and glam sometimes makes you feel a bit separate from the dancers. So it was cool to be up close and personal with them. I really wanted the rehearsal process and making mistakes to be present so it wasn’t just so perfect.”

How was it working with ballroom dancers Daniella Karagach and Pasha Pashkov?

“They’re incredible. It was a dream come true, and they were so eager to do it! It was really fun to meet new people to collaborate with. They’re married…they could not be cuter, they’re a beautiful couple. They are both always in performance mode, which is what I love, because they’re never just going through the motions. They’re actually feeling everything.”

Did you face any challenges because you are a contemporary choreographer and they’re ballroom dancers?

“They love the contemporary world. They were really intrigued about working with a contemporary choreographer, but I also know ballroom, so I could talk to them in their own language. The way it was created, it’s not technically my choreography because the way you teach ballroom is handed down. [Ballroom dancers] don’t even list a choreographer; the dancing is information handed down. I watched videos of them and would say, ‘Oh, can we put this lift in…’, and it was a true collaboration. And that’s what made it really fun and different.

It was cool to see what we could come up with together in such a short time. We only had three hours in the studio. We spent the first two hours blocking and figuring out how it would fit with the music, and the third hour filming the piece from different angles.” 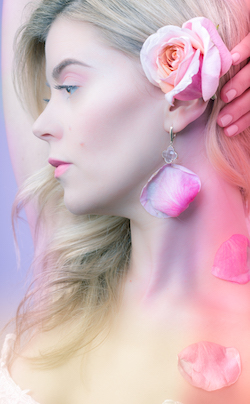 What are some benefits to dance on film versus dance on stage?

“Okay, so this is what I love. I’m actually really into dance on film now. I am really intrigued by dance on film because I’ve always been the type of person who wants to be really close to the dance. Any time I go to a show, I get front row tickets. Everyone thinks I’m ridiculous, but I want to be as close as I can get. I don’t really care about the staging…I like staging, but I’m really more interested in direct performance. I can study a dancer’s hands or feet, if I want to…it doesn’t just have to be about what the big dance is about.

That’s what I love about dance on film…you get to be up close to the dancing, and you can see different things. Like the last video I did, we stripped the dance away a lot. We came in, we had a three-minute duet choreographed, and then we realized that there were all these natural, playful, dangerous moments that ended up making the cut, more than just the dance breaks. I’m not really interested in dance side-by-side. I get it, and I can create it and I can appreciate it, but I’m more into the human interaction and how you could be next to it in real life.

And I love movies. I’m more inspired by movies than anything. So to be able to create little dance movies, it’s so awesome…the up-close. I think a true dancer knows when to just take dance away and simplify. But that takes a well-seasoned, intuitive performer with natural instincts.”

What inspires you most when choreographing?

“This is where my director hat comes in. I really love directing. I like the casting and the costuming. I hear a song, and I think about a million ways I could go with it; however, I have such a visual for who I think needs to dance it, and what they’re wearing. Setting a general tone is more important to me than actual movement, because you can do any movement, as long as the tone comes across.

I do a lot of studio work, and if I go to a studio and they give me a group of all girls, I know I need to find a dance that really rings true to female power or something like that. Or if there is a guy in it, then I need to cast it so that he’s an essential character and relates to everyone in the piece.

That’s what inspires me most is who I have in the room and what I think they can honestly portray.” 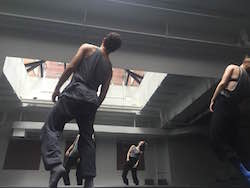 Who are your biggest choreographic influences of the past or today?

“There are a lot. Pina Bausch is one of my all-time favorites and how theatrical her work is, it’s beautiful and funny, and [her work] has so many emotions. Jiří Kylián, who is just a master. I love Crystal Pite, Mia Michaels and Travis Wall. Johan Inger has been inspiring me lately…everything he costumes, he uses real clothes, and he uses music that makes you feel something. He’ll use three songs off the same album, and he does this nice natural progression and lets a story unfold.”

What is some advice for young dancers wanting to pursue a career in choreography?

“The only way to become a choreographer is to choreograph. You just have to keep doing it and keep putting your work out there. We’re so lucky now with social media that people can find your work. I think it’s just a matter of continuing to do it and seeking out opportunities.

I choreograph all the time. I choreograph when I’m hired to choreograph, and I pay to choreograph. I rent out space and invite people into that space. I have a choreography lab in New York City, usually bi-monthly. And I just rent space and bring people in, and we’ll just work on moves. Sometimes we come up with something that’s really awesome, and sometimes I do things and just scrap it.

Twyla Tharp talks [in her book] about showing up into the space. Just continue to show up and just do it, that’s the only way.”