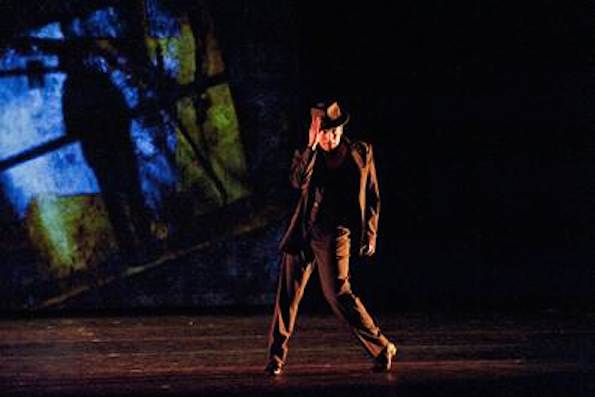 Michael Dominguez is sweating. The lithe, dark-haired El Paso native is a soloist with the New York City dance company Ballets With a Twist. He and director-choreographer Marilyn Klaus are rehearsing at her Manhattan loft for the company’s upcoming El Paso appearance, called Cocktail Hour: The Show, at the Plaza Theatre on January 30. In the show, images of iconic American drinks—Martini, Bloody Mary, Mai Tai, and more—are starting points for dance adventures.

Klaus and Dominguez have spent the last hour rehearsing the latest role he has created for Ballets With a Twist, AKA B-Twist. A solo called Boilermaker, it’s about a guy who’s looking for a fight. He’s angry and defiant, and any opponent will do—someone else, himself, the universe.

“I enjoy the puns in the dance’s title,” says company composer Steve Gaboury, who wrote the raunchy, cabaret-like accompaniment. A “boilermaker” is a shot of whiskey and a beer chaser, Gaboury explains. It also refers to someone who works in a foundry and makes boilers. “And the character in the dance is himself about to boil over.”

In today’s rehearsal, Klaus and Dominguez are turning up the heat, choreographically speaking, by looking carefully at just one turn from the dance. Klaus takes the movement apart—deciding how Dominguez will straighten the leg he’s turning on, when that heel will leave the floor, how he’ll lift the other foot to his knee, where he’ll place his shoulders and arms.

That’s for starters. Klaus asks Dominguez to do the turn in excruciatingly slow motion. Over and over.

For months, Klaus has created and eviscerated every step of the dance. For a while, she felt Dominguez was playing the movements too light and easy. She added five-pound weights to his arms and legs. “I couldn’t even move if I had to wear them,” Klaus confesses.

For Dominguez, the weights led to a revelation. “I felt both grounded and assertive,” he says. “I rethought my ballet technique. I saw that I was doing some things for the wrong reasons—over-performing them, instead of letting the steps do the work. When the steps take over, the simplest things, like walking, become big and exciting.” 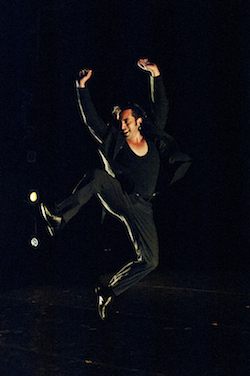 Those insights informed the role. “In this dance, Marilyn makes it so I’m fighting the movement,” says Dominguez. “It means the character is menacing, but the menace is directed inward as well as outward.”

Says Klaus, “The more Michael and I work, the more we find out about the Boilermaker guy. I didn’t have an objective when I started. I’d give Michael movements. I’d notice things that were wobbly or not right, and we’d work till we got to the bottom of it. When you approach choreography that way, the dance goes off on its own ride.”

This particular dance is about struggle, but a career in dancing need not be, says Dominguez. When he teaches, he encourages students—young and adult, in El Paso and New York City—to think of the “whole world” of dance. “If you want to be a performer, you have to commit to it,” he recalls telling them. “But you can also keep taking class while working in the administrative or business side of the field. You may not earn your living as a dancer, but that doesn’t mean you have to exclude yourself from this world.”

As B-Twist rehearsal assistant, Dominguez helps other dancers learn and practice roles. In doing so, he applies lessons learned in Boilermaker to very different works by Klaus—ecstatic Holy Water, courtly Eau de Vie, Old-South charmer Mint Julep, and others. “After Boilermaker, I’m rethinking how I move,” says Dominguez. “It’s about finding the internal logic, working the tiny muscles, not overdoing. Now, I find I can transfer that to other dancers.”

Before Dominguez left Texas 10 years ago to pursue a New York City career, he danced with Ballet El Paso and in shows such as Viva El Paso! Since then, he’s returned to appear in the El Paso Opera production of West Side Story and War and Peace by New York’s Metropolitan Opera. Favorite memories include being captain of Parkland High School’s Caperettes dance team, which meant he taught, directed rehearsals, and did guest appearances at other high schools.

“I was a shy kid, and it let me see I could dance, coach, teach, and have authority,” he recalls. “I realized I could see formations and remember other dancers’ parts. That led to similar work in college, including a scholarship and a Texas Commission on the Arts artist-in-residence award. The skills I learned in high school paid for college, and later led to my job at Ballets With a Twist.”

Boilermaker has given Dominguez intellectual challenges, as well as physical ones.  He found Gaboury’s lyrics for the accompaniment provocative.  “The words gave me a lot to think about,” says Dominguez. “They were the character talking to me in my head, or a bartender talking to me. The music made me breathe and feel even more grounded. It made me slow down.” Which made the dance more internal, more difficult—and better, he and Klaus agree. 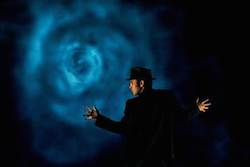 Early-20th-century German composer Kurt Weill inspired Gaboury as he was writing the music. “The character needed something dark and Germanic,” Gaboury says. He also used shifting meters and what he calls a “borderline painfully slow” tempo. “There are aspects of the music that are deep and central, but I also wanted the guy off-kilter, stumbling.”

The costume offered Dominguez more opportunities. At first, the slick business suit the character wears included a traditional shirt and tie and evoked the 1950s, says company costume designer Catherine Zehr. “Then one hot day, Michael put on a tank top instead of the shirt and tie,” remembers Zehr. “He looked phenomenal. It was perfect.” The tank top made the character feel like a boxer, says Dominguez, while the hat gave him gangster imagery to play with.

That ambiguity is what Klaus was going for. “I didn’t want the role to be a stock character the viewer recognized immediately,” she says. “I wanted him to be someone we keep finding out about. When you stay with a character—when you work at it but don’t demand anything, it gives back.”

A special electrified prop Zehr fabricated is part of Boilermaker’s surprise ending. Dominguez’s dark-brown eyes sparkle as he demonstrates how the item works. But you’re not going to find out any more about it here—no spoilers allowed! You’ll just have to go see the dance.

For tickets to Cocktail Hour: The Show, click here.