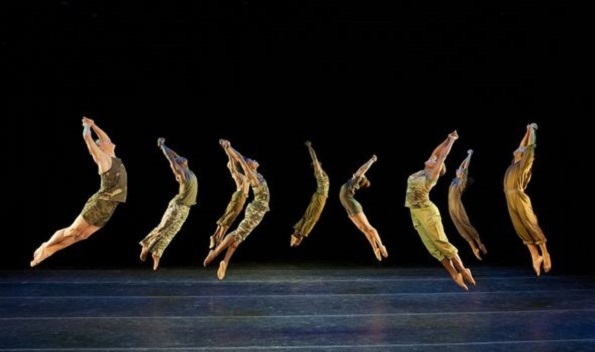 Last Sunday at New York City Center, Alvin Ailey American Dance Theater opened its evening program with a bang. Chroma, choreographed by the U.K.’s Wayne McGregor, begins with pounding music and a tense, gyrating duet. The movement stems from ballet, but rib cages jut forward, heads swirl and hips sway to and fro in extreme articulations of the body. While perfect technique is obviously necessary to perform the incredible lifts, extensions and backbends, the bodies appear almost aggressively contorted.

If any choreographer wanted to create a piece for dancers to be fierce, this would be it. Attitude practically oozes off the stage as different groupings of dancers weave in and out of intricate duets and trios. The design is severe too, with a white floor, white walls, and a white backdrop with a rectangle cut out for dancers to move through, over and across. Chroma is clearly a world where bodies use shape and articulation to retaliate against their environment.

The breath of fresh air comes from Sarah Dailey, who performs the high drama of McGregor’s choreography with both power and grace. A dancer who understands subtlety, Dailey’s movement range is as extreme and beautiful as the rest, but she adds a rare quality of finesse. The audience feels invited into her exciting world instead of attacked by it. 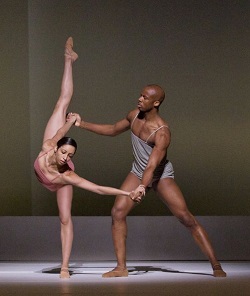 Next on the program is a revised version of Bill T. Jones’ D-Man in the Waters (Part I), a 1989 work of momentum and play that celebrates the human spirit. It’s impossible to not be carried away on the dancer’s journey as they jump, slide and lean on each other. Set to Mendelssohn’s Octet for Strings in E-Flat Major, Op. 20, the tone of the dance is joyful, but the military fatigue-like costumes hint at something dark and troubling under the surface. There are certain pieces of choreographic history that hold up against the passage of time, and the climax of this work where dancers slide on their bellies and jump through the air in canons is one of those pieces. It was a pleasure to witness.

Artistic Director Robert Battle invites us into a percussive, sensual world with his solo Takademe, performed by Kirven Douthit-Boyd. The voice of Sheila Chandra caresses the audience in rhythmic and heartfelt tones. The movement is tight, fast-paced and human. One feels that Chandra’s clicks of the tongue and breathy sighs are calling this dancer to life. A visceral, buoyant dance, this is a solo that draws you in instantly and keeps you there.

Closing the program was Aszure Barton’s Lift, created for the Ailey company in 2013. A second viewing for this reviewer, this dance proved no less fulfilling the second time around. Highlighting the beautiful bodies of this physically-talented group of dancers, Lift is a dance of the flesh. The dancers stomp, slap their chest and thighs, and press skin to skin with other dancers. The roles of man and woman are explored in a bodily, tribal fashion. This dance feels old while utilizing contemporary movement trends at the same time. Lift lets these dancers ecstatically strut their stuff in a ritual-like fashion, and the audience goes along for the wild ride.

Photo (top): D-Man in the Waters. Photo by Paul Kolnik.