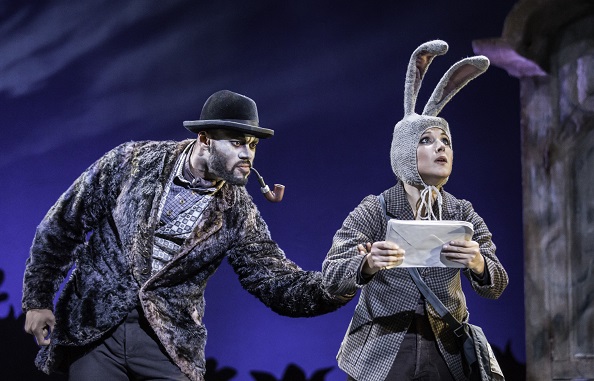 I couldn’t remember the story of The Wind In The Willows. It had been a long time since I’d heard it read to me at bedtime as a child. So as I sat as a parent now in the stunning Vaudeville Theatre to watch The Royal Opera House presentation, it was as though I was hearing the story for the first time.

The audience was a mix of press, children with parents and many adults who probably felt a sense of magic reminiscing at seeing the retelling of their childhood favorite on London’s West End.

Overall, this retelling had many magical moments indeed; it was a brilliant retelling of a timeless tale. However, sadly, there were some sections that were a tad short on magic with the general appearance of the show in a palette of very muted colors. It can be a tough time of year to open a show. For this famous story, the audience walks in from London streets filled with Christmas lights and festively decorated trees, tinsel and the beauty of Christmas. Children love bright colors and although it’s a story for everyone, it didn’t help that we watched the story evolve in understated colors in set design, costume and lighting (although each superbly designed in their own right). However, to be fair, this is a challenging show to enliven onstage without making it look like a children’s cartoon.

The set design and story began by taking us into Mole’s dusty underground hole. It was exactly as it should be, made of darker colors including a dusty-looking wardrobe that was full of charm and a clever transformative object, as was the whole set. However, when we were taken above ground by dancing characters and simple prop transitions into the English countryside, the overall colors didn’t get much brighter. While the butterflies were cleverly designed, they were easily lost since they were so small.

The lighting by Warren Letton was skillful in its design but also dimmer overall, as were the choice of colors for the costumes by Nicky Gillibrand. However, the costumes were each an intricate display of her established expertise in costume design.

Then the characters were introduced one by one by narrator Alan Titchmarsh, a well-known personality in the U.K. making his West End debut with the kind of voice you affectionately remember hearing in these stories as a child. 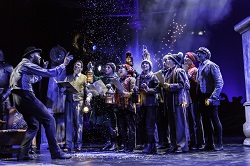 ‘The Wind In The Willows’. Photo by Johan Persson.

There were many highlights in this show. Director and choreographer Will Tuckett has a list of credits that are captivating to read, and he created dance theatre that was believable and well researched. More traditional in style, the dancing made due in the smaller space.

The actors’ physicality of their animals was brilliant – another credit to Will Tuckett. We watched dancers and movement artists that could be both technical and yet hold us to the belief that they were not human, but various famous animals in the story. Mole, played by Sonya Cullingford, was a cute, insecure creature that interacted with the space as though burrowing through sand with twitches and jerks. Ratty (Martin Harvey) was a confident, showy character. Badger (Ira Mandela Siobhan) was captivating to watch, a strong physical performer who could transform his body into an introverted animal yet still perform a strong pas de deux with Mole without losing his animalistic form. Then there was Toad (Chris Penfold), who was funny and lovable. However, the storyline evolved into his downfall before really giving the audience a chance to bond more deeply with him.

However, you can’t criticize the length of the show. It was perfect to bring children to, at just 1.5 hours plus an interval filled with charming, old-fashioned English police characters interacting with the audience.

There were many clever, witty moments in this production, including the Act 2 opening where we laughed our way through the Gaoler’s daughter (Ewan Wardrop dressed as a woman) in a pas de duex with Toad. Wardrop also transformed entirely into the chief weasel, which was a hilarious 80’s styled character.

Overall, what a delightful journey to be a part of! This is a family-friendly, timeless story that deserves to be onstage forevermore. Congratulations to the creative team and cast for opening this story up to audiences young and old once again.

Photo (top): The Wind In The Willows. Photo by Johan Persson.