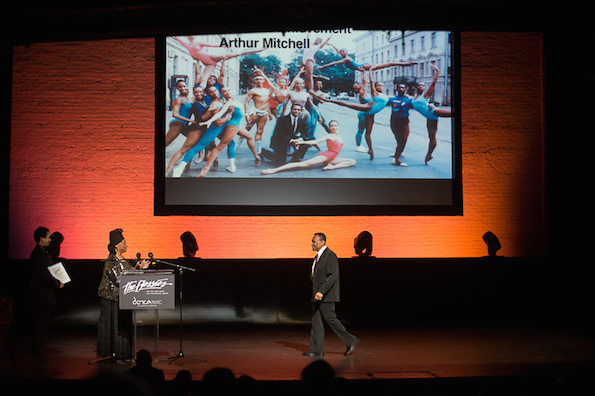 Almost 60 years ago this November, Arthur Mitchell became the first African American dancer to join New York City Ballet (NYCB). A dancer, teacher and director who would always continue to show he was a leader, Mitchell also went on to organize the American Negro Dance Company in 1966, form the National Ballet Company of Brazil in 1967, and open the Dance Theatre of Harlem School in 1969.

His life’s work so far has been about pushing boundaries, about opening up dance opportunities for all and about giving all he can give to his students and followers. And he is the first to say his career is far from over. It is no wonder then that Mitchell was recognized with the Lifetime Achievement in Dance at the 2014 New York Dance and Performance Awards (The Bessies), held this past October 20 at the legendary Apollo Theater in Harlem, New York.

A Harlem native himself, Mitchell was born in 1934. He showed his leadership early on in life. The oldest of five children, Mitchell found himself taking on many jobs in order to help financially support his family. The experience most likely forced Mitchell to grow up faster and become more independent.

“You have to work, and I’ve never been afraid to work,” Mitchell tells Dance Informa. “I’m the eldest, so I did odd jobs, which was part of growing up and taking that responsibility.”

Mitchell went to the High School for the Performing Arts, where he received his first formal dance training. The school, he says, was a big eye-opener and gave him the chance to see the world in a totally different way. It was then that a new realm of possibility, a life of dance, opened up to him.

Upon graduation, Mitchell was awarded a scholarship to the School of American Ballet. Just a couple years later, he joined NYCB, where he performed in a multitude of the company’s works and rose to the rank of principal dancer only one year later in 1956. For 15 years, Mitchell remained the only African American dancer with NYCB. 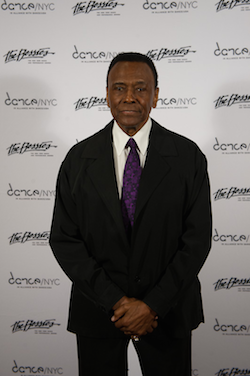 After dancing with the company for several years, Mitchell branched off to dance on Broadway and then to begin his career as a dance director. Perhaps one of Mitchell’s most profound contributions to the dance world was the formation of Dance Theatre of Harlem (DTH). Using his own money, along with a few grants, Mitchell opened the DTH School in a church basement with 30 students. It has since grown into a school with over 1,000 students, along with a professional company that tours and performs throughout the world. DTH, since its inception, has provided opportunities to Harlem youth and has paved the way for talented dancers who otherwise may not have had the chance.

Although Mitchell has not been the artistic director of DTH for the past three or four years (the company is now led by Virginia Johnson), his legacy and influence live on in the school and company.

“The time I was there, it was to give the opportunity to young people who wanted to be the best they could be,” Mitchell says. “And it wasn’t just in dance; it was a school of the allied arts. Whether you wanted to be in the boardroom or stagehand or salesmanship or teaching, or whatever it was, we gave them the opportunity and gave them the skills with which to become a professional.”

Mitchell has always, and continues to, encourage students to get the most broad education possible.

“Years ago, one was either a modern dancer or a ballet dancer, or a jazz dancer or a tap dancer,” he explains. “Today, you’ve got to be a good dance artist and know all the different styles. So I tell young people to study everything that they possibly can, because you don’t know when you’re going to be able to use it. So the more you have skill honed and trained, the better off you’re going to be, and you will be much happier as an artist.”

He recalls a time when George Balanchine told him, “You must remember: you must always be in service to the art form.” This love and respect for the art of dance is something Mitchell says he lives by today, and it is the advice that he, too, wishes to pass on to young people.

Although this award is an honor of his “lifetime achievement”, Mitchell says his career is not over.

“There’s still more to do,” he adds. “I’m working and assessing and coaching and teaching. And I’m just trying to figure out what the next step is going to be, because there’s a massive amount of information in my head, and I’m trying to think of the best way to show it, to expose it, to use it. I think the teaching and coaching will be developed more now than it ever has been in the past.”

Receiving a Bessie Award, which was named after Bessie Schonberg, who was a modern dancer and choreographer and dear friend to Mitchell, was especially meaningful to him, even more so that it was given in his native Harlem.

“What I loved about Bessie was her eye and her manner,” Mitchell says. “She was such a gentle person. She’d be very, very disciplined, but at her full she was a very giving and understanding person. So I tried to learn that from her and utilize it myself. I’m very pleased, I’m very honored, to accept this on behalf of Bessie.”