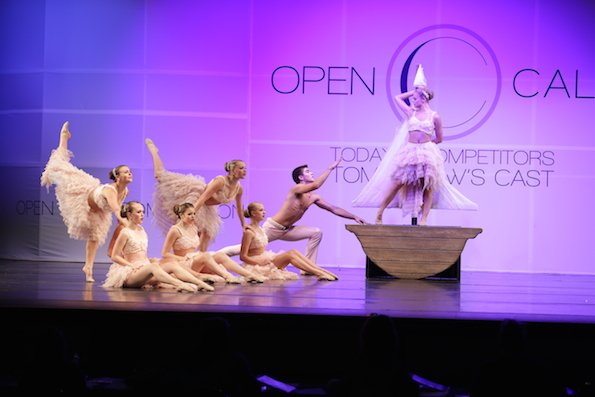 Open Call Competition is one that aims to fuel dancers’ love of performing, not just competing. The people behind this dance competition, which only had its second season this July, believe so much in fostering performance experience for today’s young dancers that the competition’s prizes themselves are further performance opportunities. This year, Open Call doubled its registration. It is no doubt, then, that dancers and studio owners want to get on board.

This season, at The Final Callback in Panama City Beach, Florida, Open Call announced two winners: South Tulsa Dance Company, which won the 12 Years and Under Choreography Battle; and Above the Barre Studio, which won the 13 and Older Choreography Battle. Both studios were awarded an invitation to perform in New York City: South Tulsa Dance Company at Broadway Dance Center’s Arts in Motion (AIM) Invitational 2015, and Above the Barre at the Young Choreographers Festival 2015. Here, meet these two studios and their proud directors.

Above the Barre Dance and Gymnastics, located in Berea, Ohio, is a studio with a mission quite in line with that of Open Call. The studio, founded in 2003 by Susan Barr, has a pre-professional training program and works hard to give its students exposure for their future careers. Barr recognized that Open Call, with a judging panel full of working choreographers and talent agents, would be a good fit. Above the Barre first participated in Open Call’s inaugural year last year, when it was held close-by in Columbus, Ohio. 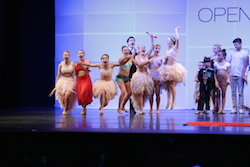 Dancers from Above the Barre in ‘If I Had A Boat’ hearing that they just won an invitation to the Young Choreographer’s Festival in NYC! Anna Wolfe, Ashley Barr, Christina Barr, Christine Jakyma, Erika Rogers, Jessica Barr, Michael Garber, Tessa Ulman. Photo by Platoon.

“Open Call feels different from other competitions and conventions because it’s not all about the awards,” Barr says. “It’s about providing opportunities, beyond the competition and providing spring and summer opportunities in New York or Los Angeles for dancers and studios. This makes the dance world seem a little smaller. I love that!”

Above the Barre has 700 students and also a Dance Company Program that is comprised of about 80 dancers, some as young as five years old. All members must train in ballet, tap, jazz, lyrical and acrobatics, as Barr and her instructors aim to develop well-rounded dancers.

For this year’s Open Call: The Final Callback, the studio performed its contemporary-lyrical routine, “If I Had a Boat”, choreographed by Amanda Recko.

“It is the story of a young man longing to get to his true love but can’t,” Barr explains. “During the routine, a mythical boat appears, and he is able to get her and embrace her one last time. The piece created an emotional journey for these eight senior dancers. The choreography allowed these dancers to connect to each other and the piece.”

Barr, Recko and the Above the Barre dancers felt extremely excited and accomplished once they discovered they had won. They are looking forward to performing at the Young Choreographers Festival in June 2015, and Barr says she will continue to provide these types of opportunities for her students.

“We want to provide an environment for our dancers to build confidence, hone their skills and pursue their dreams,” she says. “We will continue to attend competitions and conventions with the intent of giving each group choreography that will challenge them both emotionally and technically. At Above the Barre, we want to encourage our kids to strive for personal success, put their best performance on the stage every time and excel in each master class.”

South Tulsa Dance Company, directed by Keally Lilly, had quite the successful first appearance at Open Call. Having attended the Pulse Convention before, Lilly knew that its sister competition, Open Call, would be a satisfying venture for her students.

South Tulsa Dance Company presented a contemporary duet, “Roots”, choreographed by Troy Herring, a dancer with the troupe and recent graduate of Juilliard. The piece made it to the top at Open Call: The Final Callback, and the studio will now go on to dance at Broadway Dance Center’s AIM Invitational, a weekend-long workshop and showcase.

Lilly says her students were of course excited about their win, but they also took a lot with them from their experience at Open Call. 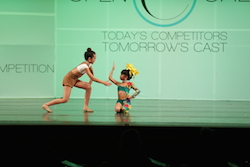 “The staff is amazing, and the competition was great,” she says. “Everyone loves to win, but for us it is more about feeling good about our performance no matter what the outcome. We prefer and enjoy to compete against the most prestigious companies around the country, which may not mean we win first, and that is okay!”

South Tulsa Dance Company has a school of about 400 students and 20 competition students, all of whom are offered classes in all styles of dance, tumbling and yoga. Lilly and the faculty of over 20 members aim to see their students go on to succeed in their dance careers.

“We want to build our dancers to where they will be able to leave the studio and be successful in the ‘real’ dance world,” Lilly adds. “They take from a multitude of instructors and attend conventions, as well as master classes. I hope they are dancing because they love it and not because they want to win!”

Next year’s Open Call: The Final Callback will be held in Virginia Beach, Virginia, from July 9-12, 2015. For more information on Open Call, visit www.opencallcompetition.com.

Photo (top): 13 & Older Age Division Choreography Battle Winner, “IF I HAD A BOAT” – Above the Barre. Photo by Platoon.