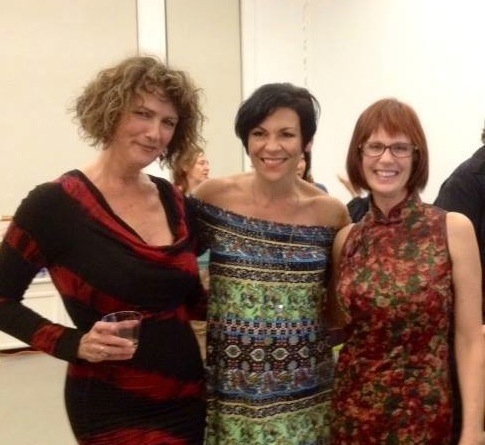 The highly-anticipated evening began with a short clip from “Broadway: The American Musical” (PBS), showing Fosse’s early career dancing in Hollywood and his rise to winning an unprecedented eight Tony Awards—including the Triple Crown (the Tony for Pippin, Emmy for Liza with a Z and Oscar for Cabaret) in 1973. More than possibly any other musical theatre choreographer, Fosse’s legacy and signature style live on today, captivating audiences, inspiring choreographers and stimulating younger generations of dancers. Diane Laurenson, Dana Moore and Mimi Quillin all teach some of Fosse’s famous technique and repertoire in their classes at Steps on Broadway.

“I’m going to start with a pretty personal question,” began Patricia Klausner. “How did you each come to be a Fosse dancer?”

“I auditioned with the men,” remembered Quillin, who had to attend the male dance call for Sweet Charity because she couldn’t make the female audition time. Weeks later, Quillin met Gwen Verdon at a rehearsal for American Dance Machine. Imitating Verdon’s lovable, quivery voice (“…a voice [Gwen] said sounded like a 78 rpm record with a wobble in it”), Quillin recounted to the Steps’ audience, “Gwen said to me, ‘There’s a step in the show you’re going to hate’” (Wasson 82.) Verdon was not only alluding to the infamously difficult “slope walks” of Sweet Charity’s “Rich Man’s Frug,” she also made it sound like Quillin had the job! Soon after that, Quillin was called in for a callback—by herself—where Fosse slowly walked around the perimeter of the studio as Quillin danced and sang. She got the job: dance captain and assistant choreographer for the national tour of Sweet Charity, starring Debbie Allen. 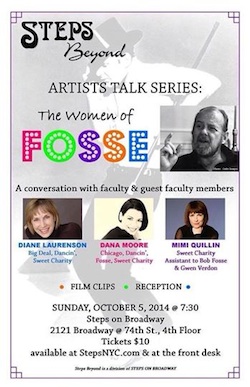 “Wow, how can I follow that?” said Moore, taking her turn answering Klausner’s question. “Well, I auditioned for Dancin’—and got down to the end—nearly eight times before I got the job. It was frustrating to get so close each time and then not get the job. But I realized that it wasn’t until that eighth audition that the right track finally opened up for me.” Moore went on to work with Fosse as the lead frug dancer (ponytail girl) in the national tour of Sweet Charity (with Quillin.)

“I wasn’t even meant to be in show business!” exclaimed Laurenson, when Moore finished. “I was a journalist and moved to New York City because I wanted to write for The New York Times.” Laurenson had danced a little in college, however, and worked as a scholarship student at Steps on Broadway. Clearly, Laurenson showed tremendous potential, and a teacher at Steps encouraged her to audition for Fosse’s Dancin’. “I went in with no headshot or resume, no song to sing, and dance clothes I had borrowed from my modern dancer-roommates,” recalled Laurenson with a giggle. “But a few days later, I answered the phone and Bob offered me the job!”

“How do you feel about being identified as a Fosse dancer?” asked Klausner next.

“I’m always fascinated how people are so drawn to Fosse’s style,” said Quillin. “His choreography is dark, yet beautiful. It is rich with irony, wit, commentary and a definite point of view.”

“With Fosse,” added Moore, “every move had a reason—and that reason had to be honest. After all, he always called us ‘actors’ rather than ‘dancers.’”

“Yes,” chimed in Quillin. “Fosse dance is all about intention. That’s why you can smell a copy of Fosse from a mile away—it’s more than just the steps, it’s what’s behind those steps.”

“In Sam Wasson’s biography Fosse,” started Klausner, “we really get a sense of Fosse’s self-doubt amidst his incredible success. What do you think this came from?”

Moore spoke up: “He felt like he would be ‘found out.’ He didn’t have the training and technique of other director/choreographers in the business.”

“Yes, insecurity,” confirmed Laurenson. “He was a perfectionist and always had a drive to do better.”

“There’s a definite sense of authenticity in Fosse’s work,” continued Klausner. “How do you pass down and carry on his legacy? And what advice would you give to younger generations of dancers who are learning Fosse dance?”

Quillin heaved a sigh. “The things that I hated about my body and how I danced are the very things that Bob noticed and loved and drew out of me. I am so grateful for that and hope that younger dancers can realize that too.”

“Working with Bob,” said Laurenson, “we were never cookie-cutter dancers. He got to know each of us on a personal level—as individuals. He featured our strengths to make us look good (and thereby made him look good, too!) He trusted us and we trusted him. I wish that every dancer gets the chance to work with a choreographer in this way.”

“We had been rehearsing ‘Big Spender,’” remembered Moore, a dancer from the national tour of Sweet Charity, “and for the entire first verse of vocal we were supposed to be absolutely still in the ‘broken doll’ poses, draped all over the barre. After hours of rehearsal, we finally achieved the perfect stillness. ‘But now,’ Gwen said, ‘it just looks like you’re waiting for the bus.’She said to imagine we were a blender filled with all the makings of a really thick milkshake and the lid on tight. Our bodies stayed still—like the outside of the blender—but inside, there was energy and excitement. We were alive. That’s so important in Fosse’s work—to have that life and intention behind the movement.”

To learn more about the Steps Beyond Artists Talk Series at Steps on Broadway, visit stepsnyc.com. Also, check the website for information about classes taught by Laurenson, Moore and Quillin, as well as other talented artists.