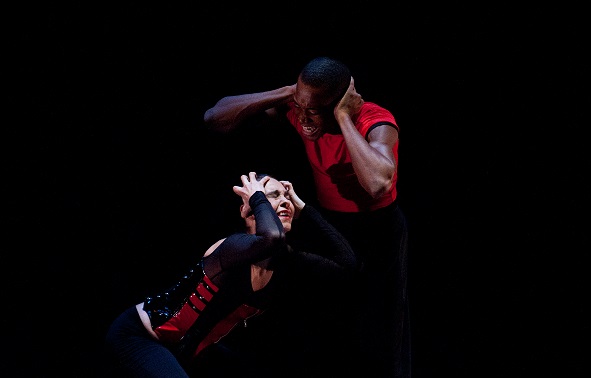 Over the weekend of September 12-14, New York City-based company Benjamin Briones Ballet presented its second choreographers’ residence program. While the company has been active over the past year performing and presenting works in various festivals (including a tour to Mexico in June 2013), this is the second of the company’s full nights of repertoire, and it looks like it feels like home for them.

Presented at the studio theater at Steps on Broadway, the evening was an intimate showing. With the studio’s back windows exposed, offering a view of elegant Upper West Side architecture and light from a setting sun, it was reminiscent of the former Merce Cunningham studios.

Artistic Director Benjamin Briones opened the program with a brief introduction of his company and a statement about the importance of the arts in society. It’s inspiring when even a smaller company in a smaller performance venue can make things happen. One example is the company designing and creating the show’s costumes entirely by themselves. It shows that Briones and his company truly believe in his words.

The evening began with a work by Ursula Verduzco, a dancer and choreographer for Benjamin Briones Ballet. The Tears I Shed Yesterday Have Become Blissful Rain was dedicated to Jorge Fuentes, a dancer who tragically took his own life this past June, an event that shook the NYC dance community. With beautiful music by Antonio Vivaldi and long flowing costumes by UBCostumesDancewear.com (of which Verduzco and Briones are co-owners), Verduzco created a serene world, a place of community and support. Each of the five female dancers chainé turn, passing each other, creating swirling patterns, and then join the one male dancer, Richard Ye, in a circle while holding hands. The work shows off the dancers’ gracefulness and Verduzco’s use of expressive, gestural port de bras. The piece ends in silence, and the dancers return to the circle through the fading of the lights. 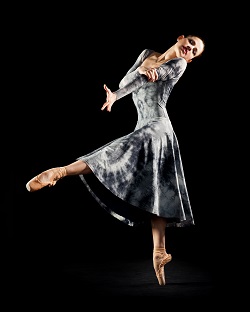 Briones’ Lights On is a company favorite, which has been performed many times with many different casts. Tonight, Verduzco and her partner Felipe Escalante dance the duet in a most passionate way. Verduzco, a long-limbed, tall, expressive dancer is hard not to watch, but she is matched well with her partner, and together they ooze with chemistry.

Lights On seems to be a piece in the Benjamin Briones Ballet repertoire that showcases the company’s interest in storytelling. A good portion of the work is first performed in silence, as the disagreeing couple use mainly gestures, and back-and-forth pushes and shoves, to convey their story, although it does make sure to use the space well. Even once the Everlast music and dancing begin with aggressive partnering and traveling lifts, we still appreciate those moments between the choreography when Verduzco and Escalante are “real”, telling their story. The audience cares about them, wants them to be okay. But by the end, after several attempts at making up, only to fight again, we’re not sure if they ever will be okay.

Verduzco’s Bleeding Love, again with music by Vivaldi, opens in a most stunning, visual way: black-clad dancers line the back wall, their backs to us and their arms wrapped around themselves. Now, and throughout the entire piece, we notice hands. Hands seem to be of great interest to Verduzco as a choreographer, as they’re able to express a story through gestures, yet they’re still a physical body part, able to hold things or people, push one’s self off the floor or assist with partnering work. Dancer Shannon Maynor, the only one dressed in red among the group, gives a standout performance. Another tall, beautiful dancer, Maynor is capable of moving between lyrical moments and also strong motions with ease and control. Her character is “mad”, interacting with other women as if they’re figments of her imagination, or perhaps parts of herself that she is trying to subdue. In the end, it appears Maynor’s character is able to regain control of herself, as the black figures fade off stage one by one.

Next on the program is Briones’ premiere, Lo Que Existe…Es Nuestro: Aqua Tu Cuerpo Y Beber, with music by Aphocaliptica and danced by Ye and Robin Gilbert. The dancers were well-matched, and the dance was one of Briones’ more soft, lyrical works. At the beginning of the show, Briones joked that he was still looking for his voice. Perhaps this work is evident of his and any person’s ongoing search. I would have loved to have known the translation of this work’s title.

An excerpt of Briones’ All that Remains was danced exquisitely by Maynor. She dances to music by Jesse Cook with a Latin flare and she appears to be missing or longing for someone or something. While Maynor is a technically super dancer, she is also equally expressive and really made the work come to life.

The final work on the program was Liasons, choreographed by another guest choreographer, Brian Norris. The three-part, light-hearted piece was a good close to the program, with the music “County Line” by Irene Molloy. Ye is a comedic asset to this piece, as he hopes to earn the attention of three ladies who are dancing around him en pointe. Even after two girls reject Ye – because of bad breath and then greasy hair – one girl seems to still hold interest. Leigh Schanfein danced the second section as a solo, with interesting floor-work and lovely, spacious movement. She is a dancer who can cover the space well. And finally, to close the piece and the program, Verduzco and Escalante perform a fun, flirtatious duet.