Originally from South Dakota, Ryan Vetter now dances with Canada’s Royal Winnipeg Ballet. Since joining the Royal Winnipeg Ballet School Professional Division in 2008, he has performed in company productions such as Giselle, Moulin Rouge – The Ballet, The Sleeping Beauty and Nutcracker.

Now part of the corps de ballet, Vetter is slowly on the rise, reaching for the stars and continuing to push himself ever further. Here, he shares his story with Dance Informa.

Ryan, you are a South Dakota native. When/where did you start dancing there?

“Yes! I was born and raised in Sioux Falls, South Dakota. I started dancing at my local studio, The Dance Gallery, under the direction of Jackie Kriens and Rebecca Hansen at the age of 7. My parents used to see me dancing around the house all the time. The thing that really pushed me to dance, though, was seeing the movie Singin’ in the Rain with Gene Kelly in the scene with the umbrella dancing in the rain. That’s when I knew I wanted to be a dancer.”

When you were still young and in training, what were your favorite styles? Why?

“Honestly, I don’t mean to sound like a bunhead, but ballet was definitely my favorite. I loved the challenge and the structure of it all. It was something I really wanted to achieve greatness in.” 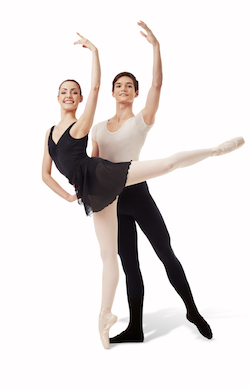 As a male dancer, were there any special obstacles you faced or challenges you had? How did you overcome them?

“Well, there’s the obvious one. Growing up in South Dakota, not a lot of people know about ballet, and especially boys in the ballet. Bullying was inevitable, but it never really bothered me. I knew what I wanted to do, and I wasn’t going to let that stop me.”

When did you know that dance was what you wanted to pursue professionally? Was there a big “a-ha” moment?

“It all happened rather quickly, actually. I don’t think there was time for a real ‘a-ha’ moment. The story my parents love to tell is, when I got accepted to the Royal Winnipeg Ballet School they told me to really think about it and decide if it was what I truly wanted to do. This was due to the fact that they would be investing a lot of money into my schooling if I decided yes. They wanted to know for sure that their money was going to be well spent. My parents always taught me to count my pennies, so even as a 13-year-old boy I understood. I went to my room, for no longer than five minutes, and came back upstairs and told them that, in fact, yes, this was exactly what I wanted to do.”

As you sought to become a professional ballet dancer, did you supplement your training with any other arts or sports training?

“Not really, the school has a very full schedule, so there wasn’t a lot of time for other training or competitions. I will say that now, as a company member, I have joined a gym to do some cross training, which I am very much enjoying.”

What was it like getting accepted to the Royal Winnipeg Ballet School? How long were you a student there?

“Getting accepted into the school was so surreal to me. I was still new to the whole concept of professional ballet training, so in my head I kept thinking, ‘I get to live on my own, and just study ballet all day?! Am I dreaming?!’ That isn’t to say I disliked my parents or my family. I love them, and I owe them everything, but I was very independent as a child.

I was a student for four years in the Ballet Academic program. I graduated with Distinction and spent one year in the Aspirant program before joining the company the following season. My experience in the school was fantastic. The training was tough, but I like to think that I came out of the school a very disciplined, hard-working and strong dancer, both technically and mentally.

The hardest part of ballet school wasn’t the steps. The hard part was how I dealt with them, when the work got difficult. The most important thing I gained from ballet school was how to keep a positive attitude and learning that getting frustrated doesn’t help you, at all.”

How did the RWB Aspirant program help launch your career?

“The Aspirant program was a great asset to helping me begin my career. You learn how a company works and it’s the time when a student begins to blossom into an artist.”

Were you surprised when you were later promoted to be an apprentice with the company?

“I was, but if I’m being honest, I was more surprised when I got promoted into the corps de ballet two months after that season started!”

What have been some of your favorite roles/works to perform?

What are some roles/works that you dream of performing one day?

“All the princes, just all of them. Swan Lake, The Sleeping Beauty, Giselle and Romeo & Juliet. My fantastic four. My own personal ‘dream-team.’ Another couple of dream ballet’s of mine are Twyla Tharp’s In the Upper Room and Rudi van Dantzig’s Four Last Songs.”

This coming 2014-15 season, what are you excited to perform with RWB?

“I’m very much excited for our whole season this year! After all, it’s our 75th anniversary! I’m proud to be a part of the longest running company on a continually operating basis in North America. That’s quite a mouthful, but very impressive!”

You have also done some choreography. Do you hope to present more of your work in the future?

“I surprisingly get this question a lot. Choreography is something that they encouraged at our school. I just tried it out because I knew I would have regretted turning down a chance to explore something different. I thoroughly enjoyed it, but let’s just say I don’t think we’ll be seeing any productions by Ryan Vetter in the near future.”

Overall, what are some future ambitions you have? What are your hopes for your career?

“I want to continue working hard. I want to keep growing within the company. I just want to keep doing what I’m already doing, which is dancing. And when I feel like I need to stop, I’ll retire. But I want that to be a long time from now.”