With last summer ending with contestants Fik-Shun and Amy Yakima winning Season 10, So You Think You Can Dance is now preparing for Season 11 with renewed zeal and anticipation. Auditions have already begun, first visiting Atlanta and then heading to Philadelphia, New Orleans, Chicago and Los Angeles. Hundreds of dancers are trying out in the hopes of becoming “America’s Favorite Dancer.”

Recently, Dance Informa caught up with resident judges Nigel Lythgoe and Mary Murphy while they were auditioning hopefuls in Atlanta. The two veteran judges dished on a new addition to this season and their favorite parts of the show.

Nigel said, “In addition to the main competition, I’m excited for this season because we’re going to present some [dance] crews. It was actually inspired by Atlanta’s Dragon House, who are just an incredible crew with a remarkable story.” 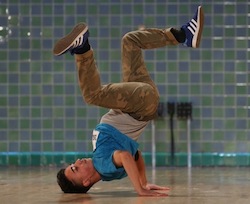 A dancer shows off his moves at the Los Angeles auditions for “So You Think You Can Dance” in 2013. Photo by Beth Dubber, courtesy of Fox Broadcasting Co.

Nigel explained that SYTYCD will hold an online contest to pick a top crew, who will later come onto the show to perform. “We’ll take a couple crews, show them to the country and say, ‘Who do you like?’ Then we’ll bring them onto the main stage,” he said.

Mary said, “We’re really excited about that because there are a lot of really great crews in this country. I can’t wait to see what turns up.”

Host Cat Deeley, who also made an appearance at the Atlanta auditions after recently attending the Golden Globes, said she’s looking forward to the new season, which might feature more live music.

“I think we’re going to mix up some of the results’ shows and get some music acts back on the show. So I think it’s going to be great! I think anytime we can mix up the format a little bit to keep people interested is great,” Cat said.

In addition, the show will bring in fresh faces as guest judges. Last season’s guest judge Paula Abdul will be busy judging the return of So You Think You Can Dance Australia. Mary said, “We will have a lot of new guest judges this season. I don’t know who they all are yet, but we’re looking forward to that.”

The guest judge for the Atlanta auditions was actress and dancer Jenna Dewan-Tatum, perhaps most beloved in the dance world for her role in the original Step Up beside co-star (and now husband) Channing Tatum. Jenna said she felt so privileged to be asked to be a guest judge. 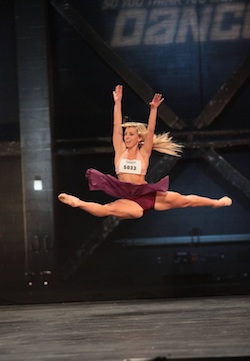 A contestant shows off her moves at the “So You Think You Can Dance” Austin, TX auditions in 2013. Photo by Bill Mathlock, courtesy of Fox Broadcasting Co.

Jenna said she wishes she could have been on the show when she was a burgeoning dancer. “To me, this is a dream-come-true to be here and to hopefully make some dreams come true for other dancers,” she said. She hopes to guest judge again later in the season.

Reflecting back on the last 10 seasons, Nigel said he can see how the show has not only progressed in stylistic diversity, but also in the caliber of dancers and choreographers involved. He said, “I think the standard of dance has just so vastly improved across the seasons… I’ve just been stunned with seeing the growth.”

He added, “Also, what I’ve come to see is that guys are being accepted as dancers again, without any questions. They don’t have to explain it. Now it’s just like, let’s get on with it. They are so strong now.”

Mary agrees that across the last 10 seasons there has certainly been a vast improvement in all aspects. Even at the Atlanta auditions she saw some innovative, new dance moves for the first time. She said, “There is always that one kid, or several kids for that matter, that will come up with something we haven’t seen before. That’s the nature of the beast, isn’t it? You think the fastest man alive is forever going to be the fastest man but then the next year someone beats his record. So many people push their bodies to do something extraordinary or to go to new heights… It’s amazing to me what some can do.”

It’s because of this constant evolution and progression of the art form that the show is still so relevant. When asked what they are looking for in dancers this season, both Mary and Nigel said they want strong, expressive dancers who have that magic quality.

Nigel explained, “I think it’s just that magic quality which is just full of life. Everyone’s got it they just don’t know how to turn it on. There’s a little switch inside us all and we must know where it is and turn it on. Some people turn it on, some people have it on all the time and some people never find it.”

So here’s to that magic quality! Good luck to all the dancers trying out for Season 11. May the “little switch” inside you be on and shining!

Note: Fox has not announced an official date that the new season of “So You Think You Can Dance” will air. Follow Dance Informa for updates.