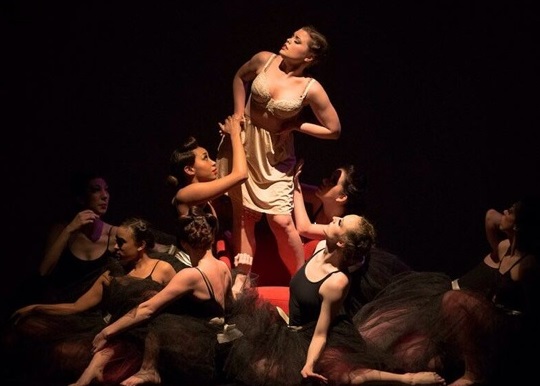 In mid-January, Dance Canvas opened its 2014 Performance Series with its annual main stage production, Introducing the Next Generation. A collective celebration of dance styles and techniques, the showcase once again fulfilled Dance Canvas’ mission of providing emerging choreographers and pre-professional dancers an outlet to develop and present new work.

The program presented nine works by 10 choreographers (one work was co-choreographed), each featuring its own choice of recorded music and set design. With each piece being vastly different from its predecessor, it kept the audience attentive and curious. The evening showcased how the organization is slowly but surely building a national presence, presenting more choreographers from out-of-state and country. 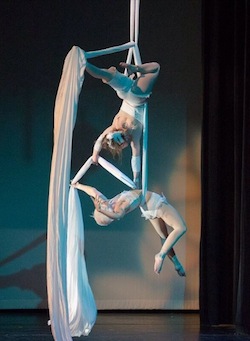 The first work on the program, Fuerta, was by local dancer, choreographer and studio director Meg Morrisey. The contemporary work was about perceptions of beauty and how specifically one woman evolves from insecurity to self-confidence. It utilized fitting, but perhaps unnecessary, gestures to express how women fuss over their looks and compare their beauty. Pulling at her face and touching her waist, the lead dancer, Alyson Quigley, was dressed in a nude bra and slip while the other dancers (metaphorically moving in a mass as to represent society) were in black tank tops and tulle shirts. [Side note: I’m not sure the push-up bra was necessary, as it proved to be distracting. A flesh-colored leotard or tank top would have been more effective.] For a topic so over-emphasized in the recreational dance world, I was hoping for more than the predictable “victim-to-empowered” story in this dance work. I was intrigued by the man who was introduced in the beginning, wondering how the choreographer would portray men’s role in the issue of women’s perception of feminine beauty. He later watched as a passive voyeur as Quigley was tossed about, but his role never fully developed, leaving more questions than answers.

The next piece, Dreaming Eternity by Alabama native Annalee Traylor, was a riveting and captivating contemporary pas de deux. While the work might have been too busy at points and could have benefited from more breathing room, it felt like the steps were orchestrated with maximum efficiency and fluidity. Creating a compelling rhythm, the two dancers ran and scrambled across the stage with beautiful synchronicity. Their torsos snaked up and down with their heads often leading the way. The anxious, somewhat spastic, contemporary movements were balanced by intriguing shapes. It was obvious the choreographer and her partner James Barrett, both of Reed Dance, had spent much time preparing and cleaning this duet. 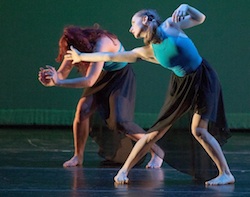 On the other hand, the opposite could be said of Simply Couture by James R. Atkinson Jr. and The Rose, choreographed and performed by Kelsey Bartman. Both of these ballet pieces performed en pointe lacked focus and clarity. Simply Couture was a canvas held together by weak threads – with little unison between dancers, a vague thematic premise and little choreographic escalation. Meanwhile, The Rose was too simple and too repetitive.

A few highlights of the evening were the contemporary pieces Glimpse and This Is a Test, and aerial duet Unhinged. University of South Carolina graduate Caitlin McCormack’s Glimpse was filled with beautiful still moments, arched backs, pointed fingers and modern floorwork. The featured duet was particularly enjoyable. This Is a Test, choreographed by Christopher Hall, a dance major at Kennesaw State University, showcased four technical contemporary dancers performing Gaga-influenced movements with precision and vigor. Unhinged was definitely a crowd favorite as Rain Anya and Sarah Bebe Holmes of international aerial company Paper Doll Militia climbed up and curled around two white aerial silks. The audience audibly gasped at numerous instances as the two women daringly stretched and balanced their bodies across and through the fabrics.

Closing the program were two entertaining works, the thought-provoking Toxic WasteHouse Pt. 1 by Morgan Carlisle Thompson and the energetic Breathe by Alicia N. Thompson. Toxic WasteHouse Pt. 1 featured technology zombies, or people addicted to media, dealing with their own obsession when the screen is turned off. Breathe, on the other hand, was a fun, upbeat, bouncy and contagious jazz piece that left viewers feeling happy and light.