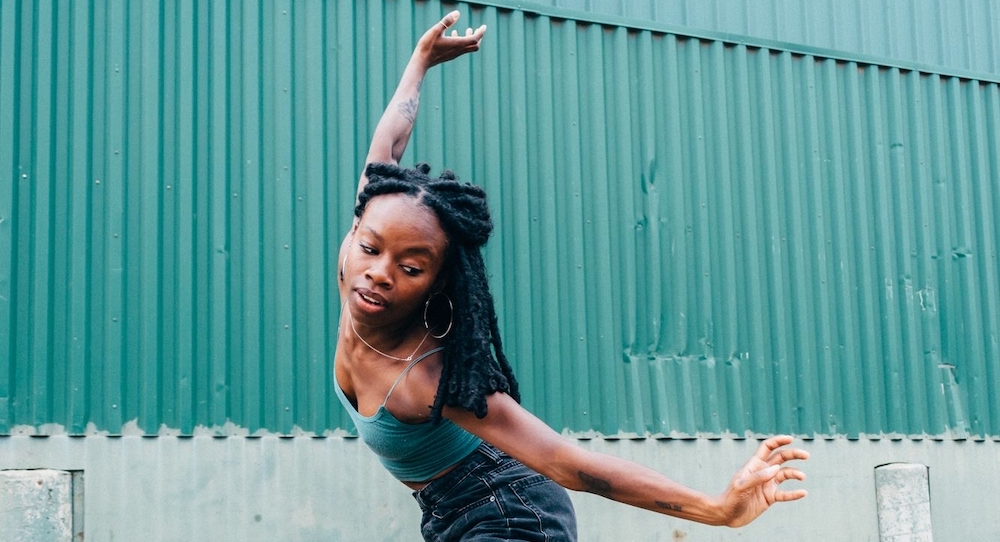 Simone Stevens, a new member of Hubbard Street Dance Chicago, is one to watch. Originally from Stone Mountain, Georgia, her journey to Hubbard had its ups and downs, but her love of dance, strong community and leaps of faith propelled her.

It wasn’t until one of Stevens’ teachers began asking questions that she developed a plan to pursue a dance career. Stevens recalls, “I had a pretty limited view on what a dance career was. She asked, ‘Do you want to perform? Choreograph? Teach?’ And I was like, oh, there are all these different avenues I could take!”

After graduating high school, Stevens started questioning if a dance career was best. “I had another wave of, ‘I don’t actually know how to do this’, and I wasn’t sure if I wanted to go to school for dance.” Her post-grad summer consisted of an Alvin Ailey intensive – her dream company at the time. She had planned to attend Georgia State University, but while away at Ailey, was unable to complete the application process.

After returning home, Stevens and her mom tried to play catch-up. “I was pretty overwhelmed, and I remember she said, ‘Do you want to take a semester off? Just wait, and see?’” Sensing permission to pause, Stevens took a gap semester, and after some coaxing from her mom, auditioned for Kennesaw State University’s dance program.

At Kennesaw, Stevens’ eyes were opened to the vast opportunities in dance. “When I got to Kennesaw, there was a senior from Illinois who introduced me to Hubbard Street. That was the first time I realized there are more companies out there.” Stevens’ exposure to different avenues of contemporary dance increased exponentially during college. “We worked with a lot of different choreographers. It was like constant fireworks were being shot off. I felt like there was a place for me, and not that I had to fit something.”

During her senior year, Stevens visited Chicago to explore the midwest and see Hubbard in person. She was intensely drawn to the style and works the company was performing. “Even if other companies were doing some of the same works, no other company was doing all of the works. They’re very established and respected in the community.”

Stevens graduated with a BA in Dance, and gave herself one year to leave Atlanta. After a failed audition in New York, she began actively looking for ways to get to Chicago. Hubbard Street offered Work-Study and Scholarship programs. After applying for both, Stevens was given the option to choose, and she chose the Scholarship. During her time in the program, she also performed with another Chicago company, and freelanced until she joined Hubbard in 2021. “I was pretty fortunate that, although I was freelancing, I was consistently going from one job to the next. It was reassuring that this is definitely where I’m supposed to be.”

When auditions for Hubbard Street came around last March, Stevens was hesitant. “I didn’t think I was ready. I felt like I hadn’t been doing a whole lot. But their audition was very different this year.” A process which previously involved cuts prior to an in-person audition became an open virtual audition. Emboldened by this change, Stevens forged ahead. On audition day, she transformed her tiny Chicago apartment into a dance studio. Cuts were made, but she was called back for round two.

“In day two, we learned rep,” Stevens explains. “I didn’t really clean out my living room for the ballet part, but with day two I was like, ‘There’s no way. We have to reorganize this whole home!’ Where I had my laptop set up was clear and open, but the other side was a disaster with everything pushed behind it. It was madness!” Cuts were made throughout each of the four choreography rounds. By the end of the day, Stevens was one of eight remaining dancers. Interviews would follow, and only four dancers would be asked to join Hubbard.

Although Stevens found out quickly that she had made Hubbard, it was not public knowledge until months later. She remembers fondly the day the news broke. “I felt so loved. I realized there are so many different communities that I’m a part of, so it was really overwhelming to hear from people from all the different parts of my life.”

Transitioning from freelance to paid full-time dancing has been mind-blowing to Stevens. “I have these moments I’m like, ‘You’re doing it. You’re really out here doing this.’ For a long time, I felt like dance was my part-time job, and I didn’t want that to just be the thing I’m doing on the side. I thought I was going to have to wait much longer before I actually got here. Because Hubbard was ‘the dream,’ I thought I was supposed to do other things first. I thought I was too young and still needed to work toward it. But I realized I did work for it. I didn’t just wake up and it happened.”

When giving advice to those desiring to dance professionally, Stevens shares, “Make sure your community is one that supports you. Trust yourself and that you’re equipped to do these things. The decision to take that first step with confidence is the scariest thing, but it can be life-changing. Don’t be near-sighted in what you want to achieve. Try to get to the core of what you want and see what options come from that. I think that comes from allowing yourself to be open to see what’s out there, and not being afraid to change course.”

Stevens doesn’t know what the future holds, but she dreams of giving back to younger dancers. “There are so many people in my life that I’m grateful for. So many people believed in me, and I feel I owe it to them to ‘finish this’ because they invested so much in making sure that I got here.” Achieving her dream of being in Hubbard has positioned Stevens strongly for the future, regardless of how long she dances professionally. “Hubbard knows people, people know Hubbard, and I’m surrounded by people I admire. So, there’s room for growth in more ways than just performance, and I’d love to explore that.”