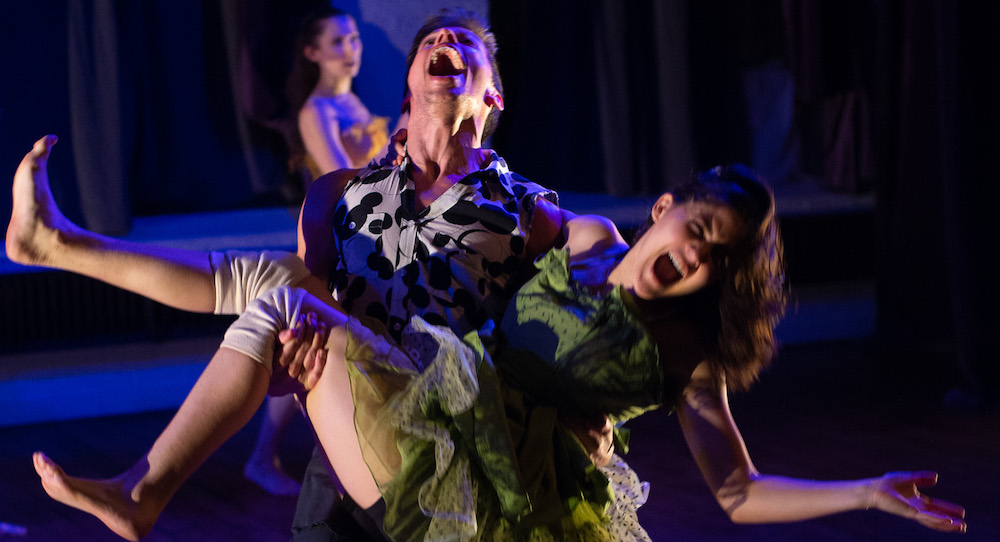 Sometimes art juxtaposed with other art can reveal what all of that art really is; contrast can highlight and underscore. That’s what came to mind for me after viewing the split bill of Annalee Traylor Dance and Project 44. While both works fell within a postmodern artistic idiom, approaches and qualities within the two works diverged. For me, these contrasts were intriguing and illuminative rather than discordant. It reminded me just how many valid avenues on which there are to travel within dance art.

The program opened with Run Boy Run, a bold and clear extended metaphor in movement. Gierre J. Godley, Project 44 director, performed and choreographed the work. He wore a simple white shirt and darker shorts, fitting into a spare aesthetic — low lighting, an atmospheric but spare score (by Gil Scott Heron). A lamp shined on the other side of the stage. Godley ran in place, sometimes slowing but soon moving quickly again. The score’s lyrics spoke of phrases such as “giving them a run for their money”, underscoring the place of locomotion in our language. I also thought of continuing to run in life, to have to tirelessly strive just to survive in this cultural climate. The lyrics also pointed to racial disparities, and I was reminded of how that state of constant running is all the more the case for people of color and other systematically oppressed peoples.

A second section brought in more technical movement and gesture, into and above the floor. Godley offered an assured steadiness, an unassuming quality even while he moved with technical command and nuance. To end, he switched off the lamp and the stage lights turned off as well. This action signaled self-determination — no matter how he had to keep running, some fundamental things remained within his control. This creative choice for an ending also felt satisfyingly complete, a package neatly wrapped and tied.

Following that came Traylor’s the sheen. Three women moved somewhat robotically, almost doll-like — yet still with a smoothness in transitions keeping it from being unappealingly rigid. Gesture fluidly blended with more codified movement to keep me intrigued and satisfied. I wondered if these were women trying to buck what was keeping them in that doll-like quality — a mystery that pulled me in. Two men entered, and opportunities for inventive partnering ensued.

Locomotive movement brought the dancers through various geometric formations and moving pictures through space — that rigid unease and harmonious fluidity still blending. It portrayed a system of these people together in co-existence, as men and women — a microcosm of the world. A feminist message was certainly here to discern, but it was subtle and nuanced. Those qualities stand in contrast to the more overt messaging of the prior piece, which also used atmospheric and technical effects more than movement and staging to speak meaning. Neither approach was wrong or right, definitively more or less effective — they were just different.

Traylor’s the blvd came right before intermission and displayed many of the same qualities. It was rather classical in movement yet innovative and daring in other aesthetic elements, the space between these elements greater than in the sheen. Black costumes with sleek cuts brought a clean modern feel. Low lighting in simple greys and yellows added to that clean modern aesthetic.

Creative partnering, like in that prior piece, caught my eye and spoke to connections and divisions between the movers. A penchee had a dancer’s partner quickly spinning her extended leg in a small circle. Then rising and backbending brought motion into new planes and qualities. This partnering, as well as moving in and out of different formations, built a tension but also a magnetism between the people on stage — such as can be in life. Such tension and magnetism are clear on “the blvd”, public spaces in which private stories play out. The ending solidified this feeling, as a memorable final image — an embrace nonetheless with evident agitation.

After intermission came Before You Speak from Flavien Esmieu and performed by Godley, Alex Clauss and Peter Cheng. The program shared how the work “was developed in part through In Good Company, Project 44’s Emerging Choreographer Initiative.” Various solos and duets offered movement inventive, theatrical, and gestural enough to build clear characters. They wore unique costumes, street clothes seemingly chosen at least partly to display and embrace individuality.

Lighting was low, shadowy, and mysterious. The original score, ATMO from Giulio Donat and Simone Donati, helped build this shadowy, mysterious atmosphere — slightly atonal, searching, and layered. Movement blended contemporary and hip-hop vocabularies, again all building individuality of character. Through spacing, formations, and qualities, Esmieu offset and harmonized these three individual characters in ways that spoke to coming together and apart as humans together in a space.

As with the opening piece, aesthetically and kinesthetically, it felt different than Traylor’s works. Both were strong and compelling in their own ways. This all underscored how there are many clear, valid roads on which there are to journey in the deep forest of dance art — terrain yet to be discovered.