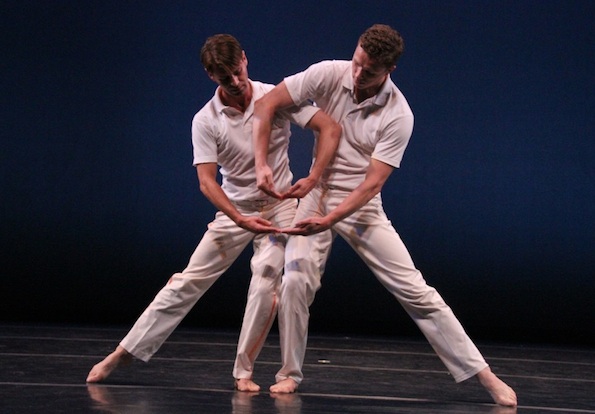 On Friday, October 11, I was privileged enough to witness Program A which included the world premiere of Vez, a reimaging of Lubovitch’s 1989 work Fandango; a male duet from Lubovitch’s acclaimed Concerto Six Twenty-Two (1986); a revival of The Time Before The Time After (1970); and the three-part work, Men’s Stories (2000).

All four works were quite different, showing the versatility and breath of Lubovitch’s troupe of dancers and his choreographic talent. It was a fitting tribute to the choreographer. 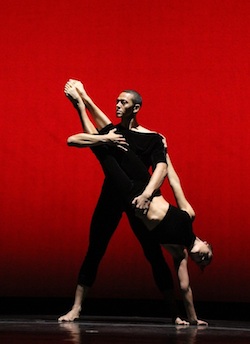 Nicole Corea and Clifton Brown in ‘Vez.’ Photo by Phyllis A. McCabe.

The duet from Concerto Six Twenty-Two started the show, giving us a retrospect into the modern dance style of the 80s. The work took me back in time to my modern dance training in that era. The two dancers, Attila Joey Csiki and Tobin Del Cuore, were both strong technically and commanded the stage. The work involved some interesting partnering with the pair making different shapes with their arms and bodies throughout, and although perhaps a little dated, it was a fitting piece for an anniversary performance.

Next was Vez, which was an entirely different work that felt much more fresh and current. Performed to live vocals by Mellissa Hughes and guitar by Gyan Riley, it was sexy and had a Spanish feel. Dancers Nicole Corea and Clifton Brown were committed to their performances.

The highlight of the first half of the program was The Time Before The Time After. It gave us a glimpse into a love-hate relationship between a quarrelsome couple. It was raw and real, and had me enthralled. It was a joy to see Australia’s Reed Luplau perform with the company, as he was a favorite of mine when performing with Sydney Dance Company years ago. His performance goes from strength to strength. Partnered by the talented and passionate Katarzyna Skarpetowska, the two were a very convincing couple who presented a quality piece by Lubovitch.

To end the show, we were treated with Men’s Stories: A Concerto in Ruin. What a strong, masculine and artistic ballet! I thoroughly enjoyed it. 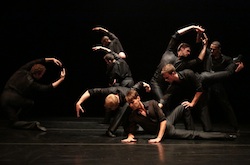 Decked out in suits with tails, the men of Lar Lubovitch Dance Company showed us why they, and their artistic director, are brilliant. The strength of the work lay in moments of unison with powerful, dramatic dancing combined with an original and interesting score by Scott Marshall. This work showed perfect collaboration with the team made up of creator, dancers, lighting designer Clifton Taylor, costume designer Ann Hould-Ward and composer Scott Marshall, all working together to create a work that not only seemed to challenge the dancers but also challenged the audience and kept them raptured.  Dancer Attila Joey Csiki was a standout. He is such a technically strong dancer who oozes stage presence and charisma.

Congratulations to Lar Lubovitch and his dancers on an extraordinary 45 years!