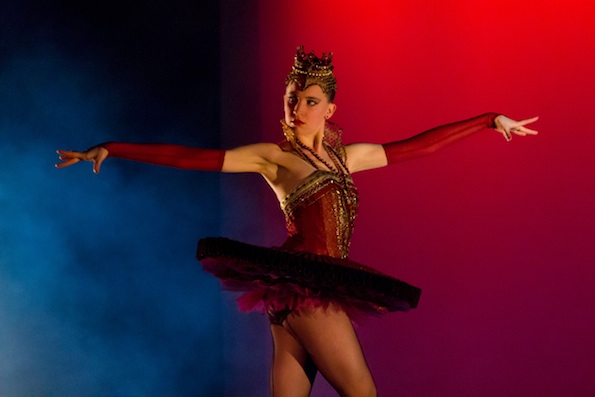 The mirrored disco ball rotating above the stage set the tone for Ballets with a Twist’s October 27th matinee at Hamilton Stage in Rahway, New Jersey. As audience members filed into the 200-seat theater, glasses of free bubbly in hand, the sparkling reflections made clear that this performance, the last of three, wouldn’t offer just classical steps.

We were sure to be treated to a big splash of showbiz as well—in music director Steve Gaboury’s pop-infused accompaniments, in Catherine Zehr’s glittering Vegas-meets-Paris costumes, and in choreographer Marilyn Klaus’s Cocktail Hour, a ballet suite that winks at the imagery behind iconic drinks.

The proof was in the dancing, and Dorothea Garland and Kimberly Giannelli delivered. They romped through rock-and-roll Sputnik and naughty-schoolgirl Shirley Temple, respectively, with the kind of theatrical intelligence that reaches out, grabs the audience and doesn’t let them even blink until it’s over.

In Margarita, Kelsey Gibson offered just as much charisma, though in a lower key. She radiated serenity as a saintly figure worshipped by a trio of child acolytes—Makayla Dean, Vanessa De Jesus and Crystal Mosquera. Cynthia Dragoni’s port de bras were so gracious and expansive, she seemed to float above Manhattan’s after-hours dreamscape. Marissa Frey charmed in White Russian’s romantic-ballet wedding scene, and Aengus Ortiz and Michael Dominguez slathered on the slapstick as dueling concert pianists in Scotch on the Rachmaninoff.

Highlights from performances earlier this fall: In Mai Tai, Lily Balogh deftly garlanded ballet port de bras with hula gestures, as though creating Hawaiian leis in dance form. In Roy Rogers, she played a comic siren—Lucille Ball if she’d done a stint in the New York City Ballet, as Balogh has. She thoroughly appreciates Klaus’s use of ballet as an armature for luscious movement, dazzling characterizations and complicated subject matter. In Balogh’s dancing, the big, pristine classical signposts are all present, but they’re not her destinations. The deliciousness in getting there is what it’s about. 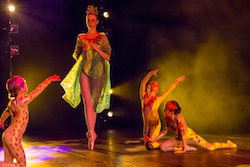 While we’re on the subject of luscious, dazzling and complicated, in recent appearances Erin Gallagher has deepened her interpretation of Klaus’s Gimlet, choreographed to the jazz lament “You’ve Changed.” Once about overcoming tragedy, the dance is now about embracing and transcending it. Gallagher’s attitudes en pointe are about yearning and her deep upper-body swings about melancholy; her pirouettes show us release. We see how very large the human spirit can be.

Over the past year, Ballets with a Twist has been performing a lot. The group has appeared in New York City and around the country in theaters, at Lincoln Center’s David Rubenstein Atrium and in nightclubs, including shows presented by impresario Beto Sutter at swanky Manhattan hotspot, Stage 48. The continual performing and varied venues have widened all the dancers’ scope. They are taking more liberties with the choreography, especially in the nightclub appearances, which have the feel of next-generation floorshows—sexy, brainy and elegant.

At Hamilton Stage, Emily Anton had plenty of opportunities to test her formidable range. In Absinthe, Anton swooped and swirled through the shadowy world of a faded 19th-century Parisian beauty. In Bloody Mary, she attacked the ferocious steps, with their improbable balances and severe épaulement. The costume Zehr created for the role had a cartridge-pleated, dark-red tutu and jewel-encrusted bodice that were as grand and unbending as the noble lady.

Anton was also the ingenue sweater-girl lead in Zombie, the full-company finale with its eerie music and fifties-meets-futuristic costumes. Retro fear-factor projections warned of nuclear attack and, post-apocalypse, showed bathing beauties plunging into swimming pools to glorious brass music. The ladies of the Zombie corps navigated this sci-fi universe wearing silvery pleated helmets that looked like mini Guggenheim Museums perched on their heads. The dancers appeared equally ready for an artsy cocktail party or disaster.

But then, aren’t we all nowadays?