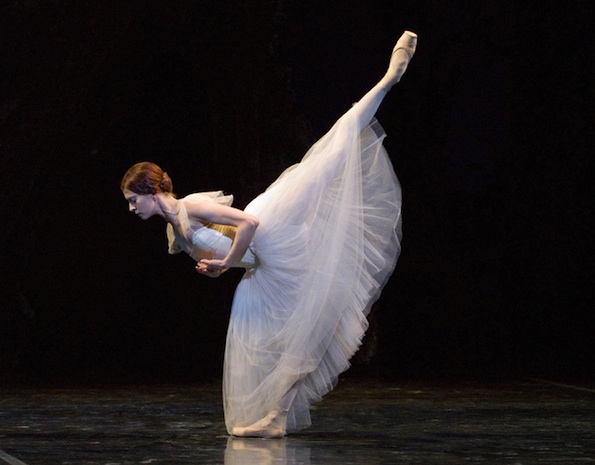 Originally choreographed for The Paris Opera Ballet in 1841, it is a ballet with immense historical significance and ties together many elements of ballet traditions—a woe begotten love story, white tutus, a corps de ballet performing unified movements and break-out divertissements to highlight the dancers’ virtuosic skills.

For the balletomane, Giselle, and other full-length classics, can still engage the mind, heart and soul. But, for a much broader, 21st century audience, it does bring up a burning question in an art form that is continuously fighting for funding and ticket sales—what is the relevancy of romantic and classical ballets in a contemporary society?

Whether intentional or not, through the simple act of mounting this tried and true classic, Colorado Ballet opened up this dialogue. The clever advertising campaign put forth by the company—highlighting dancers in non-dance setting with the tagline “Lifts you out of everyday”—shows an innovative side to the company. So what does this intersection of innovation and paying homage to history look like?

Colorado Ballet tackled this question, presenting a very traditional interpretation of Giselle to a rather diverse crowd—the range in age and demographic was broad. With costumes and sets from American Ballet Theatre, the production was visually appealing. The story moved along well and the dancers looked comfortable and confident in the classical realm.

Stepping into the title role, the petite Sharon Wehner really captured the alluring innocence of her character in Act I. Coy, yet curious; she had a lively, youthful quality to her peasant dances. Her Albrecht, danced by Viacheslav Buchkovskiy, matched her youthful exuberance.

However, while she was charming as a lovesick peasant, Wehner’s mad scene felt lacking. One yearned for more madness and desperation. Her bashful demeanor was so on par, but her love-driven insanity was too controlled.

Wehner did show grace and control in the famous white act, or second act, of the ballet. As did Maria Mosina as Myrtha, whose ballon in her grande allegro work was impressive—Mosina’s few shortcomings were in her gaze, where she often focused on the audience with a sultry expression that conflicted with her evil persona. While steady partners in Act I, Wehner and Buchkovsky encountered some difficulties in their Act II pas de deux. Both have stunning line and elegance, yet when dancing in partnered sequences, neither seemed as confident.

The true stars of Act II were the members of the corps de ballet, an entourage of Willis damned to suffer for an eternity from broken hearts. They seek their revenge on any man who enters their realm, forcing the doomed individual to dance to his death. This was the fate of Hilarian (Christopher Ellis) and meant to be that of Albrecht (Buchkovskiy), but Giselle (Wehner) intercepts the spirits’ vengeful pursuit.

Led by Monya (Asuka Saski) and Zulma (Shelby Dryer), two very talented dancers, the ensemble was stunning—this was especially the case in the famous arabesque chugs sequence. The orchestra and principal conductor Adam Flatt also deserve a tip of the hat, as the music was brilliantly played and heightened the drama of the ballet.

The evening proved that the great classics still stir emotions and resonate with a contemporary audience. As soon as the curtains closed, the audience was on its feet to show its appreciation for the performance and artists.

Perhaps a ballet like Giselle doesn’t offer commentary on a modern society. However, it does provide escapism from everyday life, which is a vital component of art. The great classics give spectators the opportunity to transcend adversity and the mundane that can weigh people down. Additionally, as new artists take on these iconic roles, they breath new life into them; thus, continuing the evolution of the art form. As new work is created, here’s to hoping the ‘old’ work is here to stay.