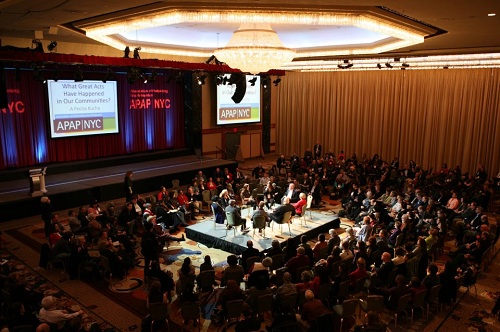 This January, the Association of Performing Arts Presenters (APAP) held its annual four-day conference in New York City, where it unleashed a myriad of performances and dance conversation topics. This year marked the organization’s 56th conference and centered around the idea of celebrating diversity but uniting in cause. The focus was on community – how those in the performing arts industry have the opportunity to build communities, engage communities and help transform communities through the power of live performance.

The association itself was founded in 1957 and was originally a gathering of college arts presenters. Quickly, though, APAP morphed into an association of people who worked specifically in the performing arts industry rather than the visual or literary arts. Today, APAP has about 1,500 members and is based in Washington, D.C.

APAP holds its conference in NYC each year, as the organization sees this city as the hub of the performing arts industry in the United States. This year 3,500 people attended the conference, held from January 6 to 10, and housed in the Hilton New York in midtown Manhattan.

There were over 1,000 showcases – some ticketed and most non-ticketed – throughout the city’s boroughs in venues such as the Alvin Ailey Studios, Dance New Amsterdam, Peridance Capezio Center and the Hilton, among others. These showcases, comprised of numerous dance companies, theater groups, musicians and even magicians, allowed these varying artistic voices to be seen and heard by a concentrated collection of arts presenters, agents, theater bookers, managers and other figures in the performing arts community. While APAP itself does not oversee any potential business transactions between a performing arts group and agents or bookers, it is the force that lays down the framework and organizes the timeframe for everyone to come together.

APAP also hosts an Expo Hall, one of the largest marketplaces for the performing arts industry in the world. This year, 350 booths took up three floors in a special area of the Hilton. The Expo Hall makes no distinction between “high” and “low” arts; rather, it ranges from dance to classical music to the marching band.

Other events at the 2012 conference included a Dance Forum that focused on issues and opportunities in the field, planning sessions that brainstormed how a community’s performing arts organization can remain vital and relevant in that community’s conversation, and discussions on the economic impact of the arts.

“APAP is proud to support all genres of the performing arts, especially dance,” says Mario Garcia Durham, president and CEO of APAP. “We were happy that the Dance Forum took place during APAP|NYC 2012 because we know how important it is to support dance initiatives and new programs, and our conference draws thousands of dance and performing arts professionals who can broaden and strengthen the discussion.”

This year marked Durham’s first term as president of APAP. As the first Mexican-American to hold this position, he remains committed to diversity and ensuring that that is the message and manner of the organization. Planning for next year’s APAP, to be held in NYC from January 11 to 15, 2013, is already underway.

Top photo: APAP’s Pecha Kucha, a plenary session about “What great acts have happened in our community?” Photo by Jacob Belcher/APAP