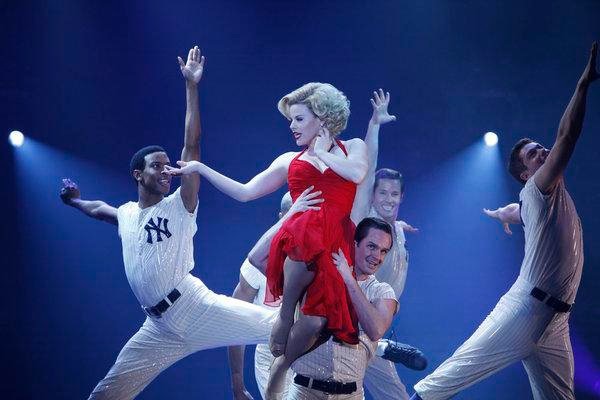 Dance and Broadway fans have a lot to look forward to this year with the new NBC musical drama, Smash. With an all-star cast, exciting choreography and Steven Spielberg behind it all, this newest show to hit the dance television craze is sure to be a … well, smash.

Smash, which premieres on February 6 and will air every Monday at 10 p.m. ET on NBC, tells the story of producing a Broadway musical – the ups and downs, the casting issues and real-life drama that threatens to hinder its progress. Debra Messing and Christian Borle play Julia and Tom, a successful songwriting duo, who hope to freshen up the Broadway scene and create a new musical based on Marilyn Monroe. Angelica Huston plays the musical’s producer, and other big stars like Uma Thurman and Bernadette Peters will make appearances throughout the series.

Much of Smash revolves around the decision of who to cast as the voluptuous, talented Monroe. Will it be Ivy Lynn, already a seasoned Broadway performer, or will it be Karen Cartwright (played by Katharine McPhee of American Idol fame), a small town girl with big dreams? Throughout the season, decisions will waver and scandals will ensue to ensure the right girl gets the part.

As if the theater drama wasn’t enough for the characters, issues in life outside – an adoption and a potential divorce, just to name a few – make things even more difficult. But, like in life, the show must go on, and Smash’s Monroe musical must fight its way through opening night, when it’s up to the audience to determine its success. 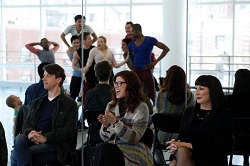 Cast of Smash in rehearsal. Photo by Will Hart/NBC

The team behind Smash is a strong one – many with a Broadway past – and everyone is attached to the idea of making the show as realistic as possible. Spielberg will team with Craig Zadan and Neil Meron, both adept in Broadway shows and musical-inspired movies (they produced Chicago and Hairspray), as Smash’s executive producers. Marc Shaiman and Scott Wittman, songwriters from Hairspray, will write Smash’s catchy tunes.

Josh Bergasse, a NYC-based choreographer and faculty member at Broadway Dance Center, is the show’s lead choreographer for season one. Bergasse himself has danced on Broadway in Hairspray and The Life, and also on tour in Movin’ Out and West Side Story. With Bergasse in reign of the moves, Smash’s numbers will be exciting and athletic.

Already there is a strong online community for Smash’s fans, who have begun to proclaim themselves as ‘Team Ivy’ or ‘Team Karen’. NBC’s website has tons of photos and behind-the-scenes interviews with the cast, and the show has its own facebook and twitter page with more special features and episode information. Many of Smash’s songs will also be available for sale on iTunes each week.

When the show starts airing in a few day’s time, tell us what you think by posting your comments below.

Top photo: Megan Hilty as ‘Ivy Lynn’ in Smash. Photo by Will Hart/NBC