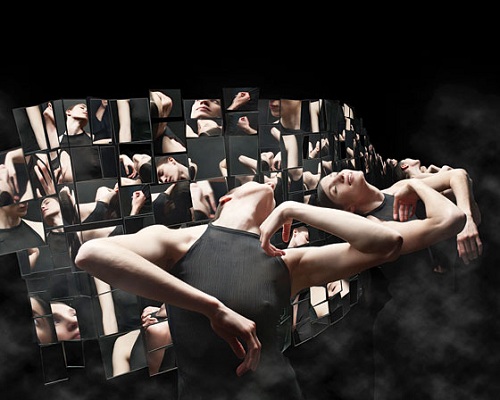 Last spring, Brandon Cournay had to answer that one, eternal question that plagues freelance dancers on an all-too-often basis: Do I go to class or go to the audition? The comfort and freedom a class allows is undoubtedly a tempting option in comparison to the potentially stressful and uptight environment often found in an audition. Class seemed like the logical choice for Cournay, but something inside him said otherwise that day. “I didn’t even want to audition,” he recounted to me on a sunny September day in Washington Square Park. That brand of self-doubt is no secret to dancers in NYC, but Cournay quickly amended that statement by admitting, “But I knew that if I didn’t go, I would regret it”. Regret it, he did not. A week later, Cournay got the call that he was one of eleven dancers who would be brought on for Morphoses’ Joyce season this month, with their world premiere of Luca Veggetti’s Bacchae.

A dynamically fluid dancer with a background in everything from jazz, to tap, to ballroom, Cournay has tirelessly been committed to being, as he jokingly puts it, “the best little freelance dancer in NYC” since graduating from the Juilliard School in 2009. Scoring gigs with everyone from Puma to the Radio City Christmas Spectacular, to Mark Morris, he views this opportunity with Morphoses as a pivotal point in his diverse career.

“When I hear ‘contemporary’ and ‘new’ this is what I think of,” Cournay explained as something that first attracted him to working with Morphoses. This idea of the “new” is something Cournay described as a concept that consistently offered a point of confusion while he was a student. “There was always this difference between ‘uptown’ and ‘downtown’ dance, but no one ever told me what that meant,” he remembers, “I feel like Luca [resident Artistic Director of Morphoses] attempts to offer a definition for ‘uptown dance’ and it’s awesome that it is premiering at the Joyce.”

A premiere Joyce season is not only a big moment for Cournay, but for Morphoses as a company. With past seasons at City Center and as a mainstay at the Vail International Dance Festival, the company has consistently been met with mixed reviews and a critical eye from audiences and reviewers alike, who approach Morphoses’ constantly transforming structure with skepticism. Founded in 2007 and originally spearheaded by famed choreographer Christopher Wheeldon, Morphoses has maintained a refreshingly fluid approach for the organization of a dance company. With an ever-changing cast of directors and dancers, the company is committed to renewing their artistic vision and being a product of the fast-paced, high-tech world we live in today. Cournay explains that the company really is “Morphoses all around.” From strict classical ballet to postmodern training, this varied group of artists is one of the most appealing things about the company for Cournay. “I like figuring out how to piece [all those elements] together,” he said.

This flexible structure also feeds in to the creation of works, as is the case for Bacchae. “We have an eclectic group of dancers with Morphoses, all of us coming from completely different paths and experiences, which I believe allows a hybrid of movement to be created,” Cournay explains. It is a movement sensibility that is technical and fluid, but still very aware of the classical ballet style from which it is derived.

Of the work, Cournay joked that the creation process made him the most sore he has ever been, but he found comfort in the physicality of the movement. “It’s an extremely physical piece, but you also must be very keen and aware of your surroundings,” he said.

Based on the Greek playwright Euripides’ famed tragedy, Bacchae will step away from a mere retelling of the narrative in favor of a present-tense consideration of technology and communication in order to shed new light on this movement narrative. “The collaboration with visual and audio technology that is going into this piece is revolutionary,” Cournay noted. “It’s the 21st century, and our lives have become immersed in iPads, Wi-Fi hot spots, and email. Why not take advantage of the technology that has become such a huge part of our society and use it in our art?” With the melding of so many exciting technological elements– including a simulcast and the use of recording devices on stage– the sheer intention to push boundaries is what Cournay hopes the audience can see in the performance.  As Morphoses’ reintroduction in the New York dance community, he sees this performance as an opportunity to increase audience accessibility to the work. “I want people to be affected by specific moments that made them think or go ‘ah ha!’” he stated. “In my observations, when seeing an evening length work it’s easy for audience members to become so enveloped in the work that they tune out to the specificities. So many minute nuances go into such an elaborate work.”

The passion for the work is more than evident in Cournay’s explanation. He relishes in the opportunity to share his first Joyce experience with Morphoses and makes a point to state that the team involved with the production is a “very determined bunch.”

A refreshing take on a conventional dance story and a forward-thinking perspective is something that is creating a lot of buzz for the company, especially in a moment when technological worlds are continuously colliding on a daily basis. It is no wonder Cournay’s excitement is downright palpable during our conversation. “We’re fired up,” he stated, simply. And, after speaking with him, so am I.

Check out the spectacular Brandon Cournay and the rest of Morphoses later this month for the world premiere performance of Bacchae, October 25-30, 2011 at The Joyce. www.joyce.org