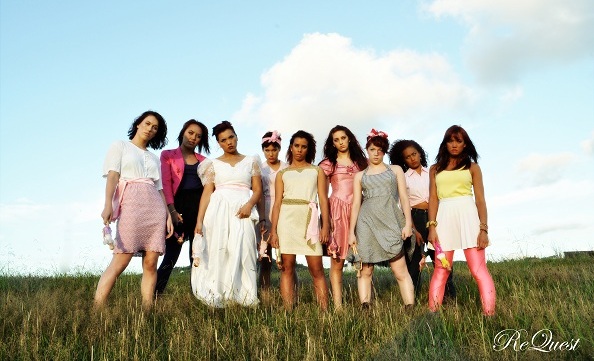 They may not have taken out the title as America’s Best Dance Crew in Season Six, however this all-female hip hop group are winning in their own right. Winning back-to-back titles at the World Hip Hop Dance Championships in 2009 and 2010, and recently performing at the Australian Dance Festival, it seems there is no stopping these girls from New Zealand in their quest for world recognition.

Dance Informa caught up with ReQuest, to chat about their stint on America’s Best Dance Crew, and what they’re up to next.

How did you find the experience of competing on America’s Best Dance Crew? Did it meet your expectations?

It was amazing, and one of the highlights of our time as a crew thus far. It met our expectations. Our goal was to just make the show and we weren’t focused on necessarily winning it. We totally enjoyed the journey of just being on the show. It was surreal for us to watch the show over the years and think, ‘wow imagine being on that show’. We never thought it would be possible as it was ‘America’s’ best dance crew, but we always had a dream of what it would be like.

You may not have won the sixth season, but there’s no doubt you’ve had success outside of the show. Are you glad for the exposure that comes from the TV show?

The exposure of being on the show was more the general public and those outside the dance world. We had already achieved a high degree of recognition through being the world champions in 2009 and 2010 so most dancers knew us. Definitely being on TV increased our fan and supporter base all around the world.

How has competing on ABDC influenced your success as a dance crew?

Besides the winners of each series, are there any other ABDC crews that stand out to you as being at the top of their game?

Definitely. Jabbawockeez are really the main crew everyone knows as they won season one and have gone on to bigger and better things. Beat Freaks and Fysh N Chicks who are both all female crews really stood out for us and they showed the way for the ladies.

Were you a bit intimidated at being the only international crew to compete on the show? Or do you think this was to your advantage?

We weren’t intimidated at all, but knowing we were the world champions meant we had to bring it. It was really a huge disadvantage not being American as it is a popularity show and we suffered when it came to public voting. We knew this from the start so we didn’t let the voting get to us.

Who are some of your dance idols?

Parris Goebel from The Palace Dance Studio is really our driving inspiration. When you get to dance, train, sweat and learn from her everyday then you can’t help but be inspired. For everything she has accomplished with ReQuest and all the crews from The Palace Dance Studio at the age of 19, makes her our idol. We all get to dance full-time because of her driving force and she has shown us how to follow our dreams.

How often do you rehearse together?

We train and dance six out of seven days. Our day is made up of fitness training, ReQuest training, teaching our hip hop classes and then Palace crew trainings. We did have a contemporary class we all took once a week.

What’s the one thing your fans would be surprised to know about you?

Not one of us actually has red hair!

What’s next for you? What are you currently working on?

We have a busy month in October for Rugby World Cup performances, and then in November we have a tour to the Philippines and Japan.